The inhabitants of Stars Hollow converge on Austin

The superfan vibe was palpable just walking up to the Paramount Theater on Saturday. An ambulance tended to the sun-blasted diehards in a line that wrapped around the block as the stars of the Gilmore Girls walked the red carpet. And the stars were out, 15 in all, not counting the show’s creator and executive producer. 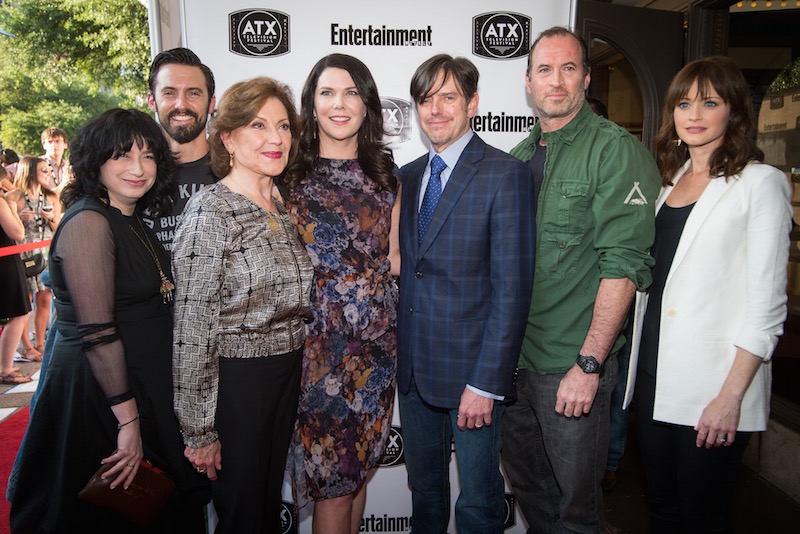 The panel began with the titular Gilmore girls – Lauren Graham (Lorelai), Alexis Bledel (Rory), and Kelly Bishop (Emily) – joining the show's creator, Amy Sherman-Palladino, who was delightfully all over the place (clearly her own inspiration for the show’s trademark mile-a-minute repartee). She described the inspiration behind many of the early creative decisions, saying she was in a writing rut before a visit to Connecticut, where the fictional Stars Hollow resides. “We were staying at an inn; maybe they work at an inn,” she remembered thinking. “I was desperate.”

The trio of actresses recounted their audition experiences. Graham found an immediate connection to the part. Bledel was at NYU hoping to transition from modeling to acting. Bishop said she “did it the regular New York actor way.”

Discussing their early experiences with the show Bledel admitted she was so green that she couldn't hit her marks, forcing Graham to all but manhandle her into position. Bishop showed off some of her trademark glowering looks, saying, “You can say so much without saying anything.” Sherman-Palladino retorted, “I can’t,” before sharing a memory about being told that 64 pages was too long for an hour long show, even though the end product repeatedly came up short thanks to the lightning-fast dialogue. It didn’t take long for the doubters to recognize the show’s unique pace and allow Sherman-Palladino even longer scripts.

The panel paused for a screening of a compilation of scenes starring patriarch Richard Gilmore as played by Edward Herrman, who passed away in December of last year. Sherman-Palladino shared that Herrman had been the first to agree to be on the reunion panel, saying, “He was our Mr. President,” prompting no shortage of tears on stage and in the audience.

The lights came back up to reveal additional chairs on stage before the rest of the cast joined the core group. A chair was left empty for the missing Herrmann.

With a whopping 18 people on stage, the discussion flowed with impressive ease. Each panelist was asked where they thought there character would be now. Yanic Truesdale (Michel) admitted, “I’m not really sure how he ended up in that town.” Liza Weil (Paris) posited that her character would still be with Doyle (Danny Strong) and hoped “they’re supporting each other and taking over the fucking world.” According to Liz Torres, her character, Miss Patty, would have become the mayor of Stars Hollow before quickly realizing she was in over her head. Naturally the general consensus was that Luke and Lorelai would still be together, although Scott Patterson’s idea that the couple had moved out of town to a lake house was good-heartedly shot down by Graham.

Questions from the audience were fielded, including one about the show’s focus on ordinary lives. That prompted Graham to share her admiration for the show’s pilot episode, which does little more than introduce characters for the first 20 minutes. When asked what would happen if she pitched Gilmore Girls today, Sherman-Palladino deadpanned, “They would validate my parking.”

The only two notable absences from the evening were Melissa McCarthy (Sookie), who was busy promoting her new movie, Spy, and Sean Gunn, who played klutz-of-all-trades, Kirk. Gunn was filming a movie in South American and wrote to Sherman-Palladino that his doctor said if he flew his chest might explode. Classic Kirk.

In the end Sherman-Palladino looked back on the show and admitted, “God, I got so lucky.” But it was clear by the standing ovation that the crowd felt like the lucky ones.

Check out our photo gallery of this historic night here.