Revenge. As a Japanese filmmaker working in the U.S., Kurando Mitsutake knew this was a universal story form. He said, "Regardless of your background, your cultural heritage or religion, the revenge theme can be relatable from anywhere." "I couldn't have done it without Asami." Director Kurando Mitsutake on finding his Gun Woman. (Image courtesy of Shout! Factory)

A self-confessed fan of Spaghetti Westerns and samurai movies, writer/director Mitsutake fused them together into what he calls a sushi western for his 2009 cult success Samurai Avenger: The Blind Wolf. It sees a Blu-ray re-release this month just in time for the home release of his 2014 followup, Gun Woman, a sideways homage to modern gore flicks. Both feature characters out for revenge, but in very different ways.

Austin Chronicle: Gun Woman is a very unusual revenge story, in that it's not her revenge. She's the weapon sent to kill for the man that can't. Why the switch-around from the more traditional revenge story of Samurai Avenger?.

Kurando Mitsutake: Gun Woman is my third revenge feature. My first feature, which isn't available in the US, Monsters Don't Get to Cry, is set around a fictional high school shooting. The father of one of the victims kidnaps the shooters from police, and tortures him to squeeze an apology out of him. My second film, Samurai Avenger, is a conventional revenge movie. On my third revenge flick, I wanted to do the revenge with a twist. So I created the gun woman character as a tool, to be used for this other guy, Master Mind's revenge.

AC: The gun woman herself is a pretty difficult and demanding part. How hard was it to find an actress that could handle it all?

JM: I couldn't have done it without Asami at all. It was kind of magical timing that we decided to work together, She's a cult Japanese film actress, and she's been in a lot of cult successes, like The Machine Girl and Mutant Girls Squad. Yet she didn't have her own starring picture, and she was thirsty for it. When we met, it was a natural collaboration. She said, I want to do something that nobody else can. We were on a 19 hour return flight from a German convention, and I just pitched it to her, and she said, holy shit, that's exactly what I want to do.

AC: A lot of Japanese gore films have characters either becoming weapons, or being fused to weapons. Gun Woman reverses that, by hiding the weapon inside the character. Where did that twist come from?

JM: As I was graduating from my film school back in the mid-Nineties, I had an idea for my thesis film. It was about diamond smugglers who import and export illegal diamonds, hiding them inside dead bodies. Of course, as a film student, I couldn't materialize the story well enough, or afford the budget, so that was shelved. But hiding something in the human body, that stuck in my head, and it was just waiting for the right story. What if we have the assassin who has to hide the gun in their body, and they have to rip it out and kill everybody before they bleed to death?

AC: Samurai Avenger references Zatoichi, the blind swordsman. There are dozens of films, and so many filmmakers, that use the character. Even Robert Rodriguez makes a clear nod in Once Upon a Time in Mexico. Why is that archetype so resilient?

KM: I grew up watching Japanese series, and the Japanese love watching heroes with a handicap. Zatoichi, the hero is a blind swordsman. Lone Wolf and Cub, he has this child that he has to take with him. Or the Ultraman myth, that he can only fight on Earth for three minutes. It comes with the cultural thing, of the almighty hero that has one impossible weak spot. 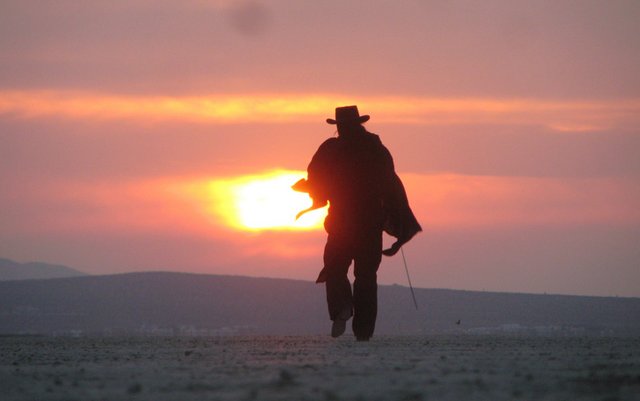 "The almighty hero that has one impossible weak spot" Kurando Mitsutake on the blind swordsman in Samurai Avenger: The Blind Wolf. (Image courtesy of Mitsutake Films)

AC: Unlike a lot of directors, you're prepared to use narrators to explain things – the two hit men in Gun Woman, the voice over explaining certain fighting styles in Samurai Avenger.

A lot of of genre movies, it's total bullshit, a total lie, and in order to make it believable to the audience, I have to explain things to the audience to make the big lie more palatable.

In Japanese TV series for the older generation, in the Seventies and Eighties, they all had voice of god narrations. American audiences would be questioning, who the hell is talking, but us Japanese took it for granted.

AC: There are a lot of film fans who will be very happy that you used a lot of practical effects.

JM: I'm a firm believer in practical effects. I had to do a fair share of digital effects on both Samurai Avenger and Gun Woman, but I loved the excitement of actually doing these things on set, and the cast and the crew get to see what's going to appear on screen in front of their eyes. If you do the practical effects, they get all jolted. "Oh, wow, that head just came off, and that's going to be in the movie." So for both my aesthetics, and for bringing the crew together as a family, I love using practical effects.

AC: You leave both films open for a sequels. Any inclination that you will go back to them?

JM: Currently, my next greenlit feature is a martial arts movie. Unfortunately it's not Samurai Avenger Part 2 or Gun Woman Part 2, but I'm definitely trying to get them financed. I seriously would love to do sequels. If I can't pull it off, it can be a joke on the end credit and people can appreciate it and laugh at it. But if I can pull it off and materialize a sequel, then it wouldn't be a joke.