One in a Crowd: Satanic Panic 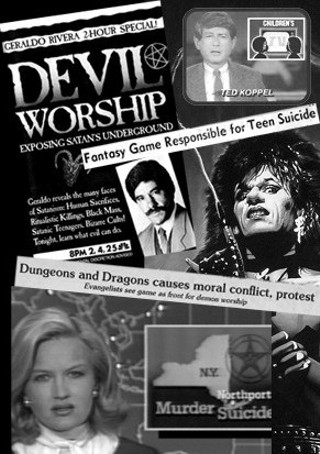 Remember when Ozzy Osbourne was the most evil man alive, and Tom Hanks made TV movies about how role playing games would turn you insane? Kier-La Janisse does.

Recognize the name? If you're an Austin cinephile, you should. Even though she is now back in her native Canada, Janisse's impact on the Austin film scene is undeniable. A booker at the original Alamo Drafthouse on Colorado, creator of the Alamo's Music Monday strand, and the author of House of Psychotic Women (and the accompanying Fantastic Fest 2012 thread), she helped define and expand the definition of cult film in this town.

Now a founder of the Miskatonic Institute of Horror Studies and editor-in-chief of Spectacular Optical publishing (seriously, does she ever sleep?), Janisse is working on her next book: Satanic Panic: Pop-Cultural Paranoia in the 1980s. Yes, the Reagan era rides again, in all its Geraldo-baiting, Dungeons & Dragons-fearing idiocy.

The book will cover all aspects of the decade that reason forgot, from the crusade against tabletop gaming, to the bizarre religious pamphlets known as Chick books, the rise of Christian metal, and serious topics like the censorious ascent of the Parents Music Resource Center, attacks on neo-pagans like Genesis P. Orridge, and the infamous McMartin Preschool trial, California's answer to the witch hunt against Fan and Dan Keller (see Believing the Children, March 27, 2009).

The project's IndieGoGo page is already up and running, with an aim of raising $7,500 to cover costs. Incentives include the finished book, Spectacular Optical's first publication Kid Power!, and a limited edition fake evangelical tract by artist Rick Trembles.

Importantly, the money will also be the first royalties paid to the contributing writers. Per Janisse, "Part of our goal with Spectacular Optical is to create a small but sustainable business that is able to pay artist fees to the many awesome (and often underpaid) writers and graphic artists working in our field, and to give them books they are proud of."

Looking for something a little less fantastical and a little more conventionally dramatic? There's still time to to buy tickets for the upcoming Tugg-powered screening of Short Term 12 (read our full review here and our interview with star Brie Larson, Checking in to Short Term 12). The May 28 screening at the Alamo Village (2700 W. Anderson) will be part of Children's Mental Health Awareness Month, and tickets are available now.