Just when you thought it was safe to go back into the water – because, you know, there isn’t any – the Alamo Drafthouse’s semi-dormant Rolling Roadshow has announced the return of “Jaws on the Water,” Sun., June 27 and Sat., July 11 at Texas Ski Ranch in New Braunfels. Tickets for these events will go on sale Fri., May 22, at noon. 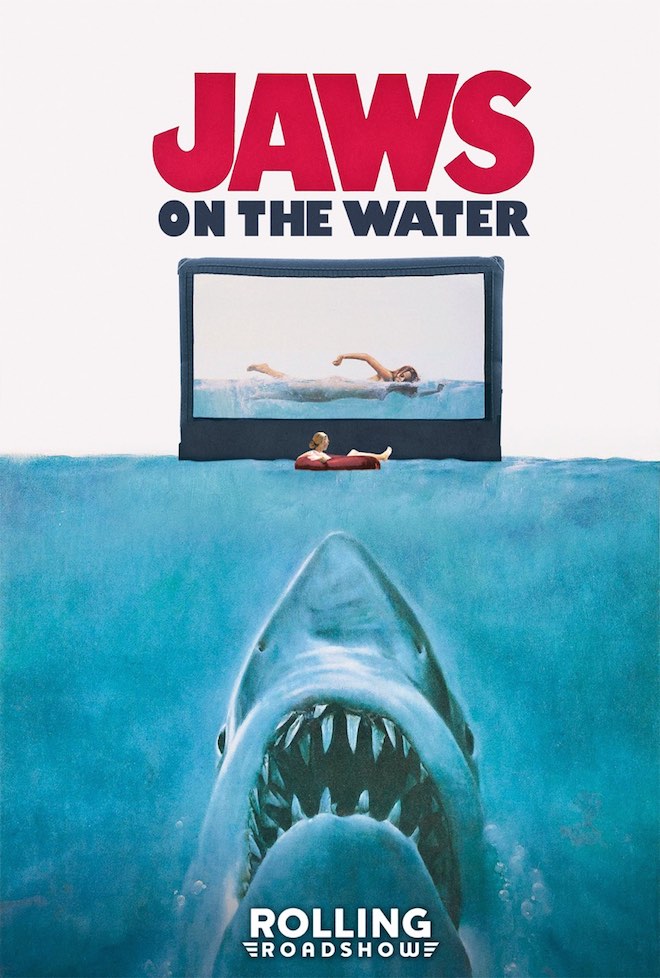 Although Alamo Drafthouse VP of Special Events Henri Mazza hesitates to call the upcoming “Jaws on the Water” the actual return to the Rolling Roadshow’s glory daze – “It’s not like we’ve been gone,” he says, “we’ve been doing them all along” – I have to politely disagree. Sure, there’s been a kinda-sorta ongoing use of the RR’s famed 25-by-50-foot, German engineered, go anywhere/do anything inflatable movie screen and 35mm traveling projection booth, but the infamous roadshows of the early-to-late Aughts were an especially gonzo merging of early-Alamo cinemania, beer, potentially risky treks into various states of wilderness, and above all, classic Austin weirdness. Screening The Iron Giant or Shaun of the Dead outside Central Market’s food court just hasn’t managed to achieve the same giddy heights of much of the Roadshow’s badass cinema repertoire.

Which is what makes Jaws at New Braunfels Texas Ski Ranch (aka “the water”) such a big deal for those who’ve been in Austin long enough to remember the ridiculously crazy fun of Roadshows past.

Take for instance their very first event (as far as we can recall), the May 4, 2002 double bill of Russ Meyer’s seminal sexploitation masterpiece Faster Pussycat! Kill! Kill! and H.G. Lewis’s equally unhinged She-Devils On Wheels, presented at the old Longhorn Speedway on Highway 183.

Not only were vintage muscle cars and general hell-raising encouraged, but Alamo founder Tim League somehow managed to locate and fly in Pussycat’s superstar amazons Tura Satana, Haji, and Lori Williams to sign autographs, reminisce, do a Q&A, and look every bit as awesomely nitro-injected gorgeous as they did when the late, great Russ Meyer first introduced them to the world in 1965. Much of that night is a hazy blur to me now, shaded in equal parts by carbon monoxide, Shiner Bock, and fanboy enthusiasm, but it made the summer of 2002 one of the best years of my moviegoing life. (That was also the year the Alamo opened their second-ever location, the Alamo Village, and the Rolling Roadshow took me 200 feet below the Earth into Longhorn Caverns to watch Corey Feldman in The Goonies … with Corey Feldman!)

And from there on out the Rolling Roadshow only got better, and cooler, and – very important, this – weirder. One of their strangest and most memorable screenings was also one I was initially least thrilled about, the world premiere of director Marcus Nispel’s The Texas Chainsaw Massacre remake.

Ballyhooed as a tribute to “cult actor” R. Lee Ermey (still best-known as frothing Gunnery Sgt. Hartman in Stanley Kubrick’s Full Metal Jacket), it was teamed with the pre-Lord of the Rings Peter Jackson’s underrated spookshow The Frighteners and featured a venue that has yet to be topped in the annals of psychotronic programming, the “Travis State School for the Criminally Insane,” seven miles outside of Austin proper. Much of the audience spent most of the evening ignoring Nispel’s heretical remake of the greatest Texas movie of all time, choosing instead to explore the genuinely treacherous grounds of the long-abandoned “asylum.”

There are two things I’ll never forget about that night. The first is stumbling (literally; we only had one tiny flashlight and it was well past nightfall) into a filth-encrusted indoor swimming pool splattered with what appeared to be a thick coating of blood, or rust, or – ewww! – god-knows-what while wandering through the sprawling former mental hospital. That was creepy. The second unreasonable image is of a snozzled and leering R. Lee Ermey lasciviously autographing a female fan’s exposed breast behind the stage after the show. That was beyond creepy. 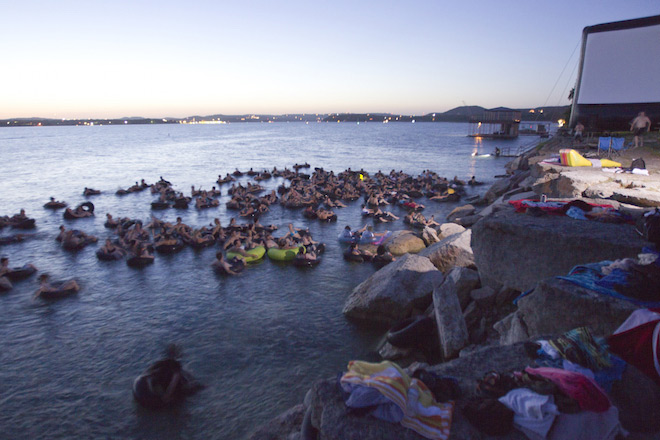 Other early Roadshow highlights included the original Jaws at Lake Travis screenings in 2002, for which the Alamo hired scuba divers to swim below the inner-tubed fan-flotilla and grab people’s dangling feet at appropriate moments of onscreen-sharkiness, the similar but somehow even more aquaphobia-inducing screening of Open Water, and a return to Longhorn Caverns for The Descent. You can see how this all added up to a momentous change in Austin’s previously theater-bound moviegoing experience.

So the Alamo Drafthouse’s Rolling Roadshow has a backstory worthy of cinema itself, and its new incarnation, with Mazza at the helm, a crazy-cool legacy to try and live up to. No mean feat, that, what with the cost of event-oriented liability insurance these days and the tremendous growth of both the Alamo Drafthouse and Austin brands over the past decade.

”We don’t have a lot of brand new things yet,” admits Mazza, “but to my mind the first order of business was, okay, what’s been [the Rolling Roadshow’s] most talked-about stuff, and, can we do them again? [The original Jaws Roadshow] is one of those events where, when people find out where I work, they always say ‘Oh, that’s that place that one time showed Jaws on the water! That’s so crazy!’ So I thought, you know, we clearly need to do that again.”

It’s a toothy, smart start to resurrecting all the best parts of the Rolling Roadshow experience. So here’s to movies in the wild, cinematic camaraderie under the stars (and under the water), and more badass cinema in more outrageous places than ever before. Let the chaos reign.

Rolling Roadshow presents JAWS On the Water! from Alamo Drafthouse on Vimeo.

The Alamo Drafthouse Cinema presents Jaws on the Water, Saturday, June 27 and Saturday July 11, at Texas Ski Ranch, 6700 N. I-35, New Braunfels. Tickets for the event will go on sale Friday, May 22, at noon. Visit www.drafthouse.com to purchase them.

The Greatest Train Movies Ever
Before "Snowpiercer" opens, a ticket for the best films on track