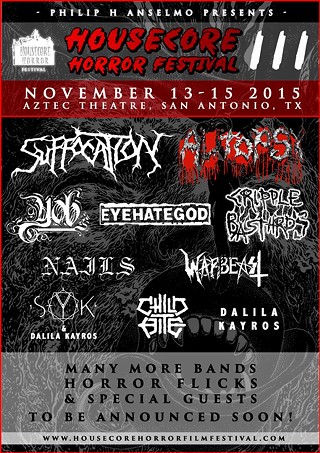 From tragedy, triumph. The Housecore Horror Festival, which many feared would end with the death of founder Corey Mitchell, will return for a third year. However, there's a big change: The combination horror/metal fest leaves Austin for San Antonio.

The creation of Mitchell and Pantera/Down/Superjoint Ritual vocalist Phil Anselmo, the festival took over the Emo’s complex on East Riverside for the last two years, an homage to the venue's history as legendary Austin metal venue the Back Room). This year, it transfers to the Aztec Theater in San Antonio. It also moves back on the calendar, from late October to Nov. 13-15.

In an update on the festival's official Facebook page, Anselmo said, “I’ve got a great team in place to help make this what Corey and I wanted it to be. There are a lot of mixed emotions here because no one can replace him. But, we know he would want this to continue and so that’s what we’re going to do. We miss him and think about him every day.”

No word on any of the films yet, but the music component is already coming together. Anselmo has brought in Maryland Deathfest co-founder Ryan Taylor to handle booking duties, and announced a handful of bands, with more to come.

While it’s great news that the event continues after Mitchell’s gutwrenching demise the morning after Housecore 2014, and will remain a peerless part of his legacy, it’s still a major loss to Austin. Mitchell, a UT graduate and lifelong advocate for the local metal scene, devised the event for Austin. Its departure, combined with the confirmed ending of its punk cousin Chaos in Tejas, leaves a major hole in the city’s musical catalog, and raises further questions about the idea of Austin as the live music capital of the world.