Ghosts, nightmares, and flashlights in this horror roundup

Two weeks of rain in Austin. Good for the flowers, the lakes are up, the sun is vanquished. You'd almost think it was Halloween, and that's a good thing. So it's probably a good time to take advantage of the miserable weather to look through some recent horror releases. 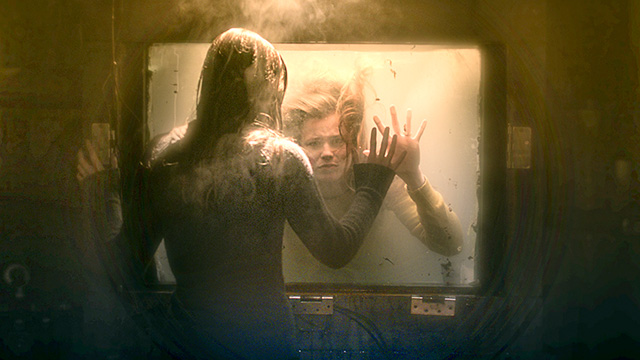 Underwater horror in The Drownsman, new on DVD and Blu-ray this week

Maybe it's a little bit of post-Mad Max: Fury Road glow, but the fact that Canadian slasher The Drownsman opens with the heroine/victim in her underwear seems a little … outdated.

Thing is, that's part of its intention. From its VHS box-art cover to its spooky premise, this is a deliberate throwback to Eighties supernatural serial killer flicks like A Nightmare on Elm Street and the later Friday the 13ths, ones where there's more to the murderer than just a predilection for gore and hardware stores.

It starts with a very basic horror trope: that if your friends don't believe you're being followed by a supernatural mass murderer, get better friends. Madison (Michelle Mylett) really needs to hang with a better crowd, because her three alleged closest friends get all mad at her because she gets knocked out at a lakeside party, almost drowns, and develops severe hydrophobia. So bad, in fact, that she misses her worst best friend's wedding a year later because it was raining. It turns out that she can't even handle a glass of water around her, which raises the serious question of how clean she is after a year of no baths or showers. Plus, her dry cleaning bills must be a nightmare.

Her appalling friends decide to stage the worst ever intervention, meaning they have another friend to summon the spirit of whatever it is Madison thinks is pursuing her from the aquatic beyond. Unfortunately, that's the titular Drownsman, the ghost of a serial killer who specialized in drowning his victims. Now, he can emerge from any stretch of aqua - from a claw foot tub to that puddle you get when your freezer leaks - and drag his next victim to his murderous lair. So, imagine if Freddie Krueger was a plumber.

The end result is a combination of soggy J-horror Dark Water, the aesthetic and gruesome trap house vibe of The Collection, and The Black Spot, the Doctor Who episode in which the monster can emerge from any reflective surface, especially water. Yes, it's derivative, and most of the characters are extremely annoying, but there's a certain low-budget stylishness. Plus, as annoying friends go, this may set a new high water mark (pardon the pun). Hannah (Caroline Palmer) is so awful that she doesn't just leave her wedding to go yell at the clearly traumatized Madison, but then bails on her (unseen) husband the next night to force her supposed friend into a bathtub. That's some weapons-grade terrible friending there.

The Drownsman subscribes to the horror rule of five: five friends, a few immediately disposable, some third-act murder fodder (usually including the one that doesn't believe any of this supernatural hooey) and the final girl. Found footage ghost story Nightlight sticks to that rule, but is prepared to pull a bait and switch.

Urban legends will always be a reliable source of fodder for horror directors, usually because you can cram the standard "five teens in the woods" format into any pre-tested spooky tale. Add in found footage as a gimmick, and it's the cheapest way to jump scares. This time around, it's five teens (score one for originality) in the woods of Covington, who play a game of nightlight (turn off your flashlight, and listen for the sound of ghosts in the woods). Of course, the ghosts in the woods don't like that, and it becomes the inevitable quest to survive until dawn.

Found footage is nowhere near dead (cf. Afflicted, Mr. Jones, Exists), but it really needs something to raise it above the pack, conceptually. The limited light source schtick has been done so bizarrely and perfectly by survival horror game Five Nights at Freddy's that this initially just feels like a run-of-the-mill sprint through the woods. It's all hard to distinguish characters running between pools of light, off-camera violence, and then the odd body dropping in front of the conveniently placed camera. 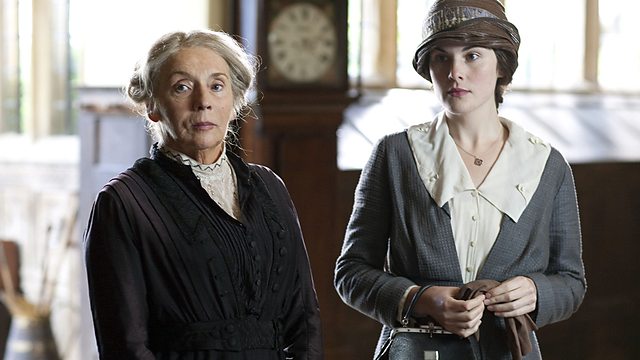 "There's the dining room, there's the scullery, that's where the lecherous ghost haunts us, and that's the pantry." Formal supernatural happenings in the latest adaptation of Turn of the Screw,

Found footage will always depend on shaky cam, but there's no need for the handheld feel in the most recent, oddly sexually explicit version of Henry James' definitive psychological horror Turn of the Screw. The original tale remains one of the most disturbing tales of evil imaginable, and a pioneer in describing the near-endless capacity for malice in children. Without it, it's doubtful there would be any of the infant evil incarnate tales, from The Midwich Cuckoos to The Omen.

Ann (Michelle Dockery, Downton Abbey's Lady Mary Crawley) is hired by a turn-of-the-century aristocrat to tend to his neice and nephew, who have been left in his care after their parents' demise. Quickly, Ann realizes that there is something untoward with the pair, potentially connected to their previous nanny and another servant. The only problem is that both are long dead.

James' genius was a sense of ambiguity. The themes – corruption, possession, innocence and seduction – are rarely made explicit, leaving the sense of creeping dread to the reader. This 2009 BBC adaptation feels oddly obligated to fill in all those blanks, and it's really the script's fault.

Sandy Welch has become the BBC's go-to classic novel adaptor (North and South, Emma, Our Mutual Friend, Jayne Eyre), but this seems a particular and peculiar misfire. It starts with the decision to move the story from the year of its writing in 1898, to briefly after World War I. It's a deliberate move that allows the script to create a female-only environment, since all the men had been butchered during the Great War, but James didn't need that trick to create such a sealed bottle environment. It even becomes anachronistic - such as the housekeeper Miss Gove (Sue Johnston) intervening when the governess beats the children.

But the core problem with that re-timing is that it creates a framing mechanism. Dan Stevens (Dockery's Downton Abbey on-screen husband) displays a furrowed brow as a psychiatrist in the sanitarium to which Anna has been confined after the terrible events. He eschews all the high profile shell shock cases in the sanitarium in an attempt to save Ann, but the implications of sexual tension evaporate. Instead, they descend into discussions of the nature of evil that diffuse James' sense of mystery. A quick edit, and all that could be readily and happily expunged.

When it concentrates on the house and the children and the ghosts, it is at its most successful. That includes an homage to the other great British ghost author of the period, M.R. James (no relation), which makes sense: after all, the show was commissioned as part of the BBC's series of Christmas ghost stories adapting the other James' works. 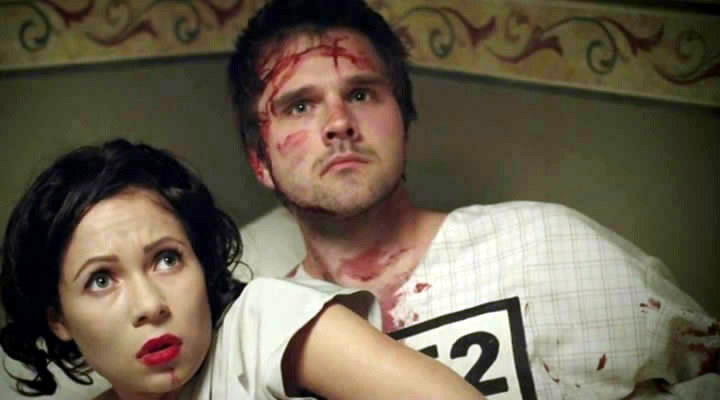 "Will I ever be free of this hellish place?"
"Did I leave the gas on?"
Mixed feelings about Australian horror Bedlam.

There's another attempt to evoke Victorian horror in Bedlam, an Australian psychological horror film that touches on incest, sexual abuse, insect eating, bucket shitting, and the fine line between torture and psychological experimentation.

The title is a reference to the nickname for Bethlehem Royal Hospital, London's original mental hospital which tragically also became a place for the rich and bored to observe the mentally ill. That sense of voyeurism is evoked here as George (Guy Edmonds) checks himself into an institution when he fears his mother's disorders may be hereditary. Then director Simon "Chew" Barker drags him through a depiction of mental illness that makes The Cabinet of Dr Caligari look progressive.

Sexual abuse, bullying, even a former Nazi scientist hiding himself as a Sigmund Freud-esque shrink, every overblown cliche is displayed. It's bold, and it's creative, but it suffers from the same visual hyperbole that afflicted Fantastic Fest 2014 psycho-sexual horror Horsehead. It finally pulls the rug up from under itself with the weirdest twist ending in quite a while. 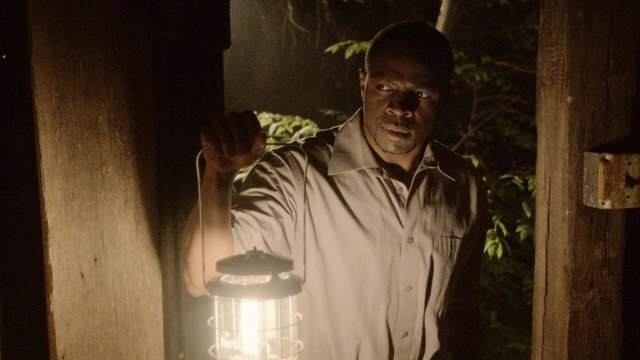 See, this is why you should never move to a small town. Sean Patrick Thomas finds something Deep in the Darkness.

By contrast, Down in the Dark opens with much more subtlety. This is traditional small town America as the realm of uncanny darkness, initially depicted with a surprising elegance as the wife of the previous doctor explains to Doctor Cayle (Sean Patrick Thomas, Barbershop, The District) that the locals around Ashborough will warm up to him. They are, she smiles, just not used to "city folk" (a delightfully prim code for African-American).

That helps emphasize Cayle's otherness in this mini-Mayberry, but the neighbors actually turn out to be delightful and friendly. That said, when one of them is Dean Stockwell, it's pretty clear that the gentility will go awry. Ashborough has traditions: no one leaves the house after 8pm, people still make sacrifices to a mythical race of night dwellers that lived here centuries before, and there's no cable. If Dean Stockwell and no cable aren't a sign that this is not a family friendly environment, then the fact that there is clearly a minor blood cult running the place should be.

The film reunites the creative force behind another Chiller Network title, 2012's Dead Souls. Again, director Colin Theys works from a script by John Doolan, adapting a novel by Michael Laimo. It can't escape the Chiller hallmarks. Yet like the best of the rack 'em, stack 'em, SyFy cousin's output, such as Larry Fessenden's Beneath, there's a surprising creepiness to it. It's not a classic, and it's quite conventionally shot, but it's actually successful as a horror film.

Its strength is in its narrative unconventionality, as Cayle realizes that it's his job to look after all the residents of Ashborough, human and otherwise. Let's just say that house calls get subterranean. Even with that revelation, there are still more secrets, and a tone of foreboding as everyone (even his wife, played by Kristen Bush) knows more about how horrific their fate will be if they don't abide by the rules.

Dabbling in similar themes to the superior We Are Still Here, it's also reminiscent of the more intimate Stephen King adaptations (most notably Storm of the Century) and early John Carpenter (with a sense of dread similar to The Fog). It's also a pleasant change to see a doctor using medical knowledge to fight off monsters, rather than trying to punch them all out.