Before we hit Fury Road, the original revs up 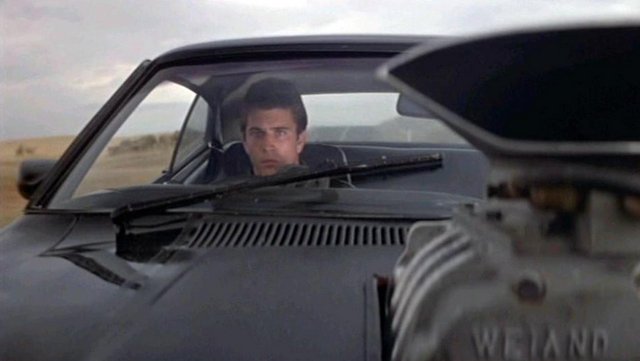 With the fourth in the franchise, the long-awaited Mad Max: Fury Road, firing up the engine for the first time since 1985's Beyond Thunderdome, it's a fitting time for the 1979 original, Mad Max, to get a Blu-ray collector's edition.

The new release contains both the dubbed and non-dubbed version. Because, apparently, in 1979, American ears were not ready for the horrors of Australian accents. Yes, imagine a time when Mel Gibson was not a big enough name to open a film. When Mad Max was released, he was a jobbing nobody who, he freely admits, would have been happy to take a commercial.

In 1979, Australian cinema wasn't creating megastars. As David Hartley explains in his seminal documentary about Ozploitation cinema, Not Quite Hollywood, everyone was making films. Every crazy bastard with a 16mm camera thought they were a director. Everyone with a rebored engine crammed into a Ford Falcon (home-welded roll cage highly optional) thought they were a stunt driver. Or, as director of photography David Eggby puts it on the commentary track, these days you wouldn't get away with half of this insanity

What's often forgotten, since those car scenes are the bits people remember, is that much of Mad Max should really be called mellow. In an abstract future, order is starting to break down, but there is still law enforcement patrolling the Australian Outback. Among them is Max Rockatansky (Gibson), a highway cop with a young son and a wife (Joanne Samuel). Much of the film is actually about this happy little family. It's the violence beyond their front door that plagues them, finally devours them, and sends Max, well, mad, as he enacts cold blooded, violent revenge on the bikers that tore his world apart.

This is first time director George Miller's nightmare creation. Before making the film, he was a medical doctor, and as a resident in Sydney he saw the results of crashes, collisions, and bikers laying down. He distilled that recklessness into the tale of a man broken by crime and hellbent for retribution.

Where it breaks from the standard revenge thriller is that it is utterly nihilistic. It's not that Max butchers and maims those that killed everyone close to him: it's that, when all is said and done, he drives off to a directionless future. There is no redemption for him, which is why Miller could make him an amoral thief and scavenger for the first two acts of The Road Warrior.

In a brief interview included here, Gibson says that it's the first post-apocalyptic movie. That's a bold claim, considering the Seventies were the decade of doom, and No Blade of Grass had even done the bikers in the wasteland shtick nine years earlier. But it's also irrelevant because Miller's world is not post-apocalyptic. It's the eve of the apocalypse. Things are breaking down, but they have not broken yet. There are even still cops: yes, their office looks like an abandoned factory, and there is only a ghost of a justice system behind their law enforcement, but they're still trying, mostly ineptly.

But the breakdown is coming, and that's personified in biker gang leader the Toecutter (Hugh Keays-Byrne). He's a precursor to warlord the Lord Humongous from the sequel, because civilization has not declined enough for such pre-barbarians to prosper. But he's also the sign of a civilization on the cusp. He's what happens if Lee Marvin's Chino takes over the Black Rebel Motorcycle Club instead of Marlon Brando's tortured poet Johnny. He's the man that can twist blue-eyed schoolboy Max into the broken wreck of a man that finally wanders, bloodstreaked and soulless, into the wasteland.

What may seem strange to viewers of the rest of the franchise is how little this film has in common with them. Two years later, in The Road Warrior, Miller had revised the world as a neo-barbarian fantasy, while Beyond Thunderdome was post-industrial high fantasy, with Tina Turner as the evil queen. Fury Road – the first in the franchise without Gibson – looks less realistic than ever (fire tornado, anyone?). The original's power was that it felt so worryingly near and plausible.

The opening minutes are a landmark in stunt driving, pacing, and character. Two cop cars chase after a maniac after he steals their fastest car, They careen through a semi-abandoned town, placing everyone in peril, including themselves. In a genius sleight of hand, Miller's staccato edit implies far worse peril and gore than is actually there.

Yet it's how he presents Max that really must be watched: In parts and hints, like a jigsaw. A jawline in a rearview mirror here, boots there, his hands picking up shades or gloves. It's not until he's won a game of chicken with the car thief that he's finally revealed, and you see him. He's not a rough and tumble, world-weary killer. He's 21, with soulful blue eyes and a hint of panicked despair. He's not the traditional gunslinger. He's Shane as a callow youth.

That's the genius of casting Gibson, who got the job almost by accident because his friend Steve Bisley was auditioning. They ended up as patrol buddies Max and Goose, and while Bisley is incredibly underrated as the slightly more seasoned and humane of the pair, it's clear that Gibson is a superstar in the making. As the rather hagiographic short doc Mel Gibson: The Birth Of A Superstar explains, Gibson had spent three years as Australia's National Institute of Dramatic Art perfecting his skills, and uses his first headlining role as a showcase reel. There are so many moments that hint at who he will be, and the undoubted charisma that made him a global star. He even fits in a little juggling, previewing the comedy chops that kept the Lethal Weapon films so off-kilter.

But strip all that away, and what remains is still just a badass road movie, the greatest Ozploitation movie ever made. And when that stunt guy takes that bike wheel square in the back of the head, you know it's bone-shatteringly real.

Mad Max Collector's Edition (Shout! Factory) is out now on Blu-ray. Also out this week:

Amira & Sam (Drafthouse) "Opposites attract" has always been a mainstay of rom-coms, but this innovative dip into the melting pot of New York delicately, intelligently, and deliciously brings a US military translator and an Iraqi migrant together. Read our full review here, and our interview with director Sean Mullin, Not Another Rom-Com.

Halt and Catch Fire Season 1 (Anchor Bay) AMC's sleeper sucess about Silicon Prairie, the IT scene that fueled the Dallas economy during the early days of home computing, recently got picked up for a second season. Missed it the first time around? Read our five reasons you should watch it.

The Last Five Years (Anchor Bay) Anna Kendrick and Jeremy Jordan may be co-headliners in this big-screen adaptation of Jason Robert Brown's Off-Broadway smash, but from the opening notes of heartbreak anthem "Still Hurting", this is another star enthralling performance from the Pitch Perfect star. Read our full review here

Mr. Turner (Sony) Director Mike Leigh, actor Timothy Spall, and cinematographer Dick Poper collaborate to create a visually stunning and detail-rich insight into the life of great British artist William Turner. But do the details create a full portrait, or merely a series of sketches? Read our full review here.

Selma (Paramount) The uneven but undeniably powerful tale of Martin Luther King and the Civil Rights movement: now effectively a classroom text on the issue, and sadly, post-Freddie Gray, more timely then ever. Read our full review here.