Noir City Finds a Woman on the Run

How a film festival resurrected a lost thriller twice 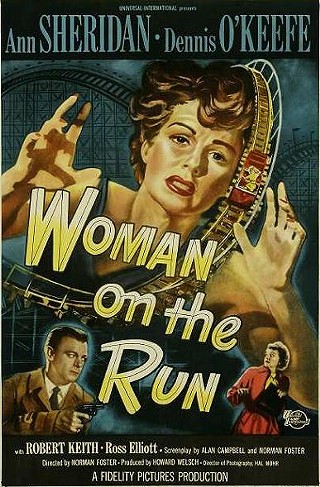 What's that old saying, we only kill the ones we love? Film Noir Foundation president Eddie Muller knows that, and that's why he's showing Woman on the Run at this weekend's Noir City film festival. He said, "I'm the guy who found that movie and resurrected it, and I'm the guy who is part of the reason it was lost."

This weekend, 10 of the 11 titles screening at the second Austin stop for the festival come from the pen of author Cornell Woolrich (see "Noir City Film Festival Returns"), but 1950's Woman on the Run is the exception. The murder thriller, starring Ann Sheridan and Dennis O'Keefe, and co-written by Alan Campbell (A Star is Born), has done a great job of evading audiences. For years the only source material was a VHS copy shot from a Seventies TV broadcast. When it came to celluloid, the trail was dead. But that didn't mean Muller, noir film's greatest sleuth, was giving up.

The problem was that Universal Pictures said they didn't have a print. They were only the distributor, and Fidelity Pictures were the producers. They went out of business, and Universal had no records of a print in their archives. Turns out, not having something and not knowing you have something are different beasts. Muller said, "We found documentation at the Academy of Motion Picture Arts and Sciences that, upon dissolution of the distribution agreement, one archival print would remain at Universal Pictures. So we photocopied it, and showed it to the people at Universal Pictures, and said, 'According to this, you're supposed to have this movie.'"

So into the archives the Universal staff go, and there they find an uncatalogued print that wasn't just pristine, but still had the original laboratory seals on it. Muller said, "It was truly a matter of never trust the computer."

Muller's discovery lead to a series of screenings, starting in his home of San Francisco in 2003, before festival and special screenings around the nation. The Woman on the Run had finally come to rest.

Then, in 2008, tragedy struck. A welder had left his torch burning on the Universal back lot, and the resulting fire had engulfed the section of the archive containing regularly checked-out prints. Muller admits to a sense of guilt: If he'd never found that agreement, then he'd never had found the print, and it would still be safe in long-term storage.

But ever the optimist, he never really gave up. A while later he was in London, where he had been invited by the British Film Institute to beta-test their new digital catalog. Out of curiosity, he typed in Woman on the Run. No print. They did, however, have a dupe negative and a 35mm master soundtrack: exactly the materials he needed to strike new prints. With the help of a $65,000 grant to the foundation from the Hollywood Foreign Press Association's Charitable Trust, that's how Woman on the Run will be sparkling on the screen of the Alamo Ritz this weekend.

Noir City: Austin – A tribute to Cornell Woolrich runs May 8-10 at the Alamo Ritz. Woman on the Run opens the festival at 7.35pm on May 8. Individual tickets for all screeninsg and details at www.drafthouse.com. Find out more about the Film Noir Foundation at www.filmnoirfoundation.org. Read more about Cornell Woolrich in this week's issue, "Noir City Film Festival Returns".

Walk Away From the Light
Cinema Club showcases overlooked noirs