Five years after he was arrested, Lonnie David Franklin sits in a California jail cell. If convicted, he may go down in history as America's most butcherous serial killer. But what interests filmmaker Nick Broomfield is the community that created the killer, and the racial politics that allowed him to go undetected for 25 years. "It's the same with all these stories. The individual in many ways is just representative. The context is more interesting than they are."
In talking to residents of South Central LA for his new documentary Tales of the Grim Sleeper, filmmaker Nick Broomfield moves beyond the serial killer bio trope.

For his new documentary, Tales of the Grim Sleeper, Broomfield spent a year and a half in South Central Los Angeles, trying to find out more about the environment that created and hid these murders. What he found was that, rather than the 10 killings of which Franklin is suspected, the number could be closer to 100. Institutional police disinterest in what happened in that part of town left a killer to run loose for nearly three decades. "Los Angeles has never really recovered from its racial demarcations," the documentarian said.

A long-time LA resident, British-born Broomfield likened it to another city he lived in. It's a comparison that some residents might not like: Johannesburg, the largest city in South Africa. In both, there are areas where "as a white person, you almost never go to. When I heard about these murders, I thought, wow, this would never happen in Santa Monica where I live, because they would shut it down after three killings. Here it's literally hundreds of people."

Broomfield's relationship with the City of Angels started in the Seventies, when his then-partner's mother opened a clinic. The African-American population, much of which had moved to South Central for blue collar manufacturing, engineering and aeronautics jobs during the post-war boom, faced mass unemployment, and depended on such clinics for basic health care. "Then federal funding for that got cut off in the Reagan years, and I became more and more aware that this was really two cities, with very little communication between them."

The focus of Tales of the Grim Sleeper often slips away from Franklin, but then he's never the real subject. "The film about Lonnie Franklin, it scrapes the surface," Broomfield said. "It's the same with all these stories. The individual in many ways is just representative. The context is more interesting than they are."

That's a recurrent theme in Bromfield's work. Take 1992 documentary Aileen Wuornos: The Selling of a Serial Killer, where the mass murdereress provides an insight into the system that failed to protect her from rape and abuse when she was a child. Even in a supposed celebrity expose, like 2002's Biggie and Tupac, he eschews the red carpets in favor of a blunt discussion of how musicians living up to the gangsta persona has lethal repercussions.

The South Central Broomfield depicts is the perfect place for a killer like the Grim Sleeper to fester and slaughter. On one side, there's a population that doesn't trust the law and fears any kind of engagement. On the other, there's a police force that doesn't care, that has developed a piece of slang. NHI. It stands for no human involved. Broomfield explained, "This is the police term for homeless people, hookers, drug addicts. They don't solve those crimes, because they don't see as being part of their job."

Broomfield is as much a part of – and a character in – his films as anyone he interviews. His documentaries chronicle their own making. That's a tick he started with 1988's Driving Me Crazy (where a slashed budget pushed him front and center), and refined in 1991's groundbreaking The Leader, His Driver and the Driver's Wife. It's a technique that has provided some of the most jaw-dropping moments in modern cinema, like Broomfield shambling, unannounced, up to infamously violent rap icon Suge Knight right in the middle of a prison. It's documentary film as quantum physics: Broomfield's presence shapes the shooting and what answers are given, so he simply acknowledges that in the edit.

Some times, the impact of the observation is greater than others. So how does a 67-year-old, private school educated, plummy-voiced Englishman end up rolling through one of the poorest, most racially segregated parts of LA, randomly asking people whether they knew a serial killer? He admits, he stood out. "There is such a race issue in this town, that when there's a white person around, it means there's a problem. We're either narcs or we're johns." 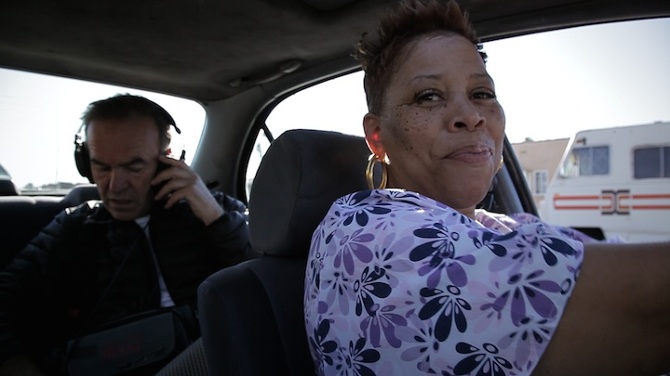 "She defined us in a different way." Broomfield and Pam Brooks, the woman that became his guide to the South Central of the Grim Sleeper.

It took a long time, some trial and error, and a few hairy moments, before Broomfield and his son/cameraman Barney Broomfield started gaining the trust of the community. Figures like Margaret Prescod, founder of Black Coalition Fighting Back Serial Murders, who had spent years trying to get the law enforcement to pay attention: Franklin's friends, who, after initially berating Broomfield as a peckerwood, openly swap stories of sexual exploits; the women struggling with crack addiction who endangered themselves for a few dollars; and even Franklin's son Christopher, who still lives in the family home that his father is accused of turning into a slaughterhouse. But most important was Pam Brooks, a self-described former crack whore who somehow had survived her experiences. She became his guide, his guardian, and his straight-talking encyclopedia of the real South Central. Broomfield said, "She defined us in a different way. … By the end of the filming, we'd been in and out of the neighborhood for a year and a half, and people would come up and chat to us."

Their stories are what Tales of the Grim Sleeper is really about, so Broomfield recently showed the film to LA Council Member Herb Wesson. "He said the problem in this city is that the racial dialogue has finished, and we need to get it restarted." However, what afflicts South Central, and a thousand communities like it, is not simply a race issue. It's another aspect of the cycle of disenfranchisement: the area's elected office holders aren't funded by local donors, but by the police association or the teachers' union. Broomfield said, "The black officials who tend to get elected quickly forget where they came from, and are not in any way politically responsible to their communities."

It's a problem that goes right to the highest offices in the land, and Broomfield has particular criticism for US Attorney General Eric Holder: "He will come out and say things about civil rights issue that sound like we're going to have some reform here, but whenever it goes to the Supreme Court he supports the police. So there aren't any precedent cases." The end result, he added, is that "the police in these areas do what they do because they know they can get away with it."

For Broomfield, that's the wellspring of a law enforcement culture that makes it somehow OK that Freddie Gray ends up in a Baltimore police station with 80% of his spine severed. Broomfield said, "That footage is heartbreaking. I was so upset, seeing that, and the signal that sends out to the rest of the country about appropriate behavior. It's shocking."

Broomfield agrees with Wesson that there needs to be a new discussion about race. He said, "There was this amazing article in The New York Times a few days ago, saying 1.5 million black men have just disappeared from their communities. One in six black men between the age of 25 and 65 are unaccounted for. These are people who are in prison or have just disappeared." Yet there's something more pivotal, and that's breaking the NHI – no human involved – culture that pervades both law enforcement and policy. "There needs to be some overview as to how you deal with a serious crack epidemic on a community level. The government has to take some responsibility for how the crack got in there in the first place, and stop treating it like an individual issue."

That's really what Grim Sleeper tried to do: look beyond the gruesome headline to talk about the individuals. Yet a year and a half is a long time to spend tackling one subject, talking to one community, driving its streets, hearing their stories. It's hard to not become personally engaged, and that's amplified because of the tragedy of the story. There's a sense of confessional in some of the interviews, of people astounded that someone wants to hear their story. And their stories are tragic: addiction, prostitution, desperate violence, grinding poverty.

So how does Broomfield emotionally detach himself from the story after shooting finished? Quite simply, he doesn't. The plight of Brooks clearly plays on his mind. "Pam is a bright person, but she still struggles every month to pay the rent. She can't get a proper job. I've been trying to help her expunge the felony conviction, but it's hard work. How many people are going to spend a year trying to expunge a felony conviction, or know how to?"

It's a pattern that goes back through his career. He has become lifelong friends – or at least corresponded – with many of the subjects of his films, exchanging letters and postcards with Wouronos, meeting recently with the titular star of Heidi Fleiss: Hollywood Madam. Last year he attended the funeral of Ethel Singleton, one of the subjects of his first film, 1971's Behind the Rent Strike. Broomfield called her "this amazing woman … we became very close. With people like Pam or Margaret Prescod, I expect to remain in their lives."

Tales of the Grim Sleeper debuts on HBO on Monday, April 27, at 8pm Central. 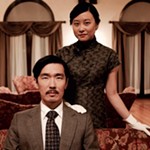