DVDanger: Four Films in Search of a Cult

Cult film status is a rare blessing and curse. A curse, because it also means you flunked on finding a big audience. Blessing, because your movie oddity becomes a touchstone for some, and has a chance of being rediscovered later. The question remains, can one deliberately make a cult movie, or is it always just an (un)lucky accident?

Australian exploitation cinema may not be on most people's radar, but in the Seventies and Eighties, it gave the world some of the defining and undeniable cult films, like Mad Max (and, for more deranged tastes, Razorback). There's also a vast vault of undiscovered gems, like blue collar nightmare Wake in Fright, waiting to be exhumed. As chronicled in the excellent documentary Not Quite Hollywood, such films were predicated on and enabled by two facets of life Down Under. First, a gung-ho spirit of machismo and grit that imbued many directors with the deranged belief that they could make a film, too. Second, that there was so much wilderness, that you could disappear for a few weeks, do whatever you wanted, and come back with no ramifications.

Long Weekend takes both those ideas, throws them in the blender, and pours out an eerie eco-warning.

It's 1978, and Peter (John Hargreaves) and Marcia (Briony Behets) are taking a nice camping trip. A few days by the beach, nothing to do but swim and sunbathe, a few beers, a little outdoor cooking, nothing better. Truth is, this pair is who Smokey the Bear did those PSAs about. The great outdoors is their garbage can, and Peter doesn't even stop when their car hits a kangeroo in the middle of the night, leaving the poor beast screaming and bleeding on the blacktop.

Director Colin Eggleston initially builds up the conflict between the couple. There's something off-kilter in their relationship, in Marcia's cold shoulder and Peter's scarcely-restrained seething rage over some unstated sin in both their pasts. It seems like this is a kitchen-sink drama without the sink, as the pair struggle and fail to fix what's broken between them. Those sequences are surprisingly effective, with Hargreaves burning as the traditional stereotype of the Aussie male, the Okker, flailing and failing to deal with his beer-crippled emotions.

What takes this into potential cult territory is the Outback, and the constant chittering, scurrying, growling and crawling of the beasts, bugs, and birds out in the woods. There's never anything as overt as found in a drive-in classic like Day of the Animals or Grizzly. Instead, Eggleston balances a fine line between the couple transferring their inner angst and fury on to the woods, and the idea that nature is really, truly furious with these interlopers. Shapes in the water, angry birds enraged that their nests have been disturbed, spiders webs in just the worst places. The old joke that Australia's wildlife is just a catalog of things that want to kill you has never been more vividly caught, and Eggleston has them enact an almost shamanistic vengeance upon his protagonists. 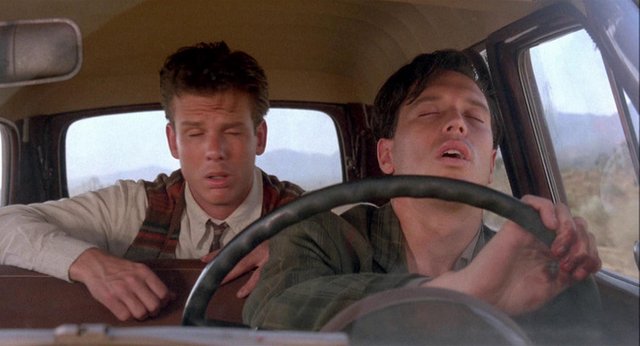 Another retro re-release, although less gruesome or confrontational, is Late for Dinner, the second directorial outing for W.D. Richter. It also explains why it was his last. Make no mistake, Richter's influence as a writer of genre cinema is undeniable: The Frank Langella Dracula, the Donald Sutherland Invasion of the Body Snatchers, and it was his script polish that timeshifted Big Trouble in Little China from a period Western to a gonzo Eighties masterpiece.

Late for Dinner has a time shift of its own. Starting in 1962: two brother-in-laws, Frank (Peter Berg) and Willie (Brian Wimmer) are on the run after a kidnapping and near-murder. Don't get them wrong: they're actually really nice guys, and this is all a terrible misunderstanding. So they end up in Pamona, Calif., where they are frozen by some scientists, wake up 30 years later, drive home to find Willie's wife (Marcia Gay Harden) and daughter (Colleen Flynn). They find them, there's a family reunion, and that's kind of it.

So why the excitement, or even the re-release? Because Richter's first film is a true cult classic: The Adventures of Buckaroo Banzai Across the 8th Dimension has insatiably loyal fans that, 31 years after it disappeared without trace at the box office, are still hoping for a sequel. Here's the thing: Buckaroo Banzai was inexplicable. Steven Spielberg once called his screwball comedy 1941 a raisin soup of a film (everyone loves raisins, and everyone loves soup, but that doesn't mean you should put them together). Richter's first film was raisin soup – a sci-fi-action-satire-retro oddity that even its fans have trouble explaining. For Late for Dinner, it seems like Richter and scripter Mark Andrus (As Good as It Gets, Divine Secrets of the Ya-Ya Sisterhood) ran away from anything complex, leaving something weirdly flat and anodyne.

It's not bad. It's just unengaging, and Richter's desire to have the actors pitch their performances at "local am-dram production of Our Town" is inexplicable. What could have been a hybrid of Back to the Future and The Majestic is instead merely an affable curio. 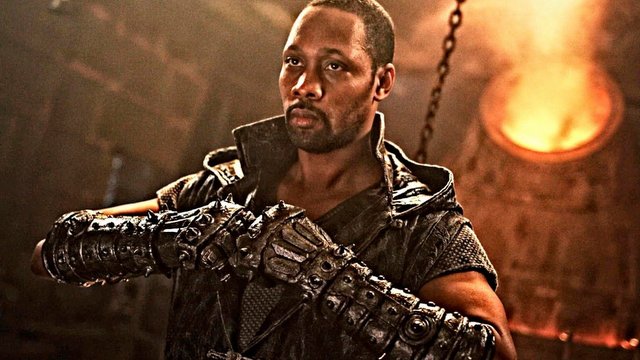 The man with the iron fists does not fear tendinitis. Rust, now that's a different issue.

Richter wasn't the only director to deliberately aim for cult status, since 2012's The Man With the Iron Fists remains one of the most gleefully berzerk movies of the last decade. Wu-tang Clan founding member and martial arts obsessive RZA somehow managed to convince Lucy Liu, Russell Crowe, Dave Bautista, Pam Grier, and Rick Yune to join him in a deranged fantastical tale set in a semi-mythologized 19th century China. And it is … surprisingly good. It was definitely great fun, and RZA is a devoted acolyte of the form. So now he has penned and stars in The Man With the Iron Fists 2. And it's … OK.

RZA returns as Thaddeus, the titular man with the iron fists, a former blacksmith who has become a spirit of vengeance. At least, he was: the sequel opens with Thaddeus seeking a mystical pool in a far-off monastery that will restore his chi. Instead, he gets attacked by the brother of one of the many, many, many people he killed in the first film, and is left drifting down the river for the next half hour of the film. Yes, the biggest name wrote himself out for much of the opening sequence, as the action shifts instead to a small village, where evil forces have the residents slaving in a silver mine.

This time, RZA leaves the director's chair to journeyman sequel expert Roel Reiné (Death Race 2, Death Race: Inferno), who is increasingly the WWE's go-to straight-to-video man (The Marine 2, 12 Rounds 2: Reloaded, The Condemned 2: Desert Prey). He's the archetypal safe pair of hands, so that means this lacks the joyous insanity of the original. RZA made that as if he was never going to be given a camera again. So like it or not, it was at minimum entertaining, which is all he ever wanted.

The Man With the Iron Fists 2 is a pretty standard historical action revenge flick, boosted more by RZA's skills in the soundtrack department than on-screen. That's mostly left to the Asian cast, as Mayor Zhang (Cary-Hiroyuki Tagawa) and Master Ho (Carl Ng) chew on the clearly delicious scenery as they grind the noble peasants into the dust. Ng may be the best thing here, delivering one of the most jaw-droppingly unromantic monologues possible to his courtesans. Meh, at least the action sequences are pretty kick-ass, and RZA continues in his aspiration to create authentic martial arts movies that don't leave the American audience depending on subtitles or bad dubs. 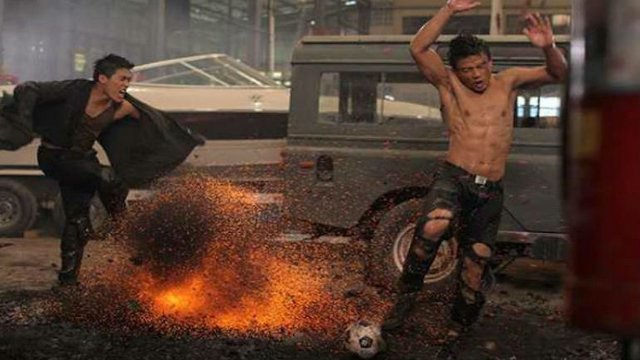 The best part of Vengeance of an Assassin is, sadly, the first ten minutes. And they may be a dream sequence. It's hard to tell.

There's a sadder note to Thai action flick Vengeance of an Assassin, because it's the final film for director Panna Rittikrai. He may be a little more familiar as a fight choreographer and the mentor of Tony Jaa (Ong-Bak). He has one more posthumous project to come, as stunt boss for the upcoming Jaa/Dolph Lundgren slugfest A Man Will Rise), which hopefully will be a more fitting end to his career.

Rittikrai was a truly great great stunt director, as the opening sequence (a clear nod to 2009 Thai soccer-meets-muy thai Fireball) proves. But as a director, not so much. As soon as this amazing sequence finishes, it's not even clear if it was a dream or not, which is just baffling. But then, not much here makes sense.

The eponymous assassin is Natee (Dan Chupong), who starts the story being raised by one of his uncles in a repair shop. Only his uncle is actually a former crime lord, as are all his uncles, so he asks another uncle if he can become his trained killer. The uncle says no, so he asks again, and apparently that's enough. He takes up a career of randomly butchering people so that he can finally learn who killed his real parents. This should be a Late For Dinner-level linear plot, but it's so incoherent that it's almost impossible to tell who is doing what, why, and often where. Considering Rittikrai's illness and final death from liver disease, it's almost cruel to be critical. But this feels incomplete, with the stellar action sequences (including a masterful final attack on the villains' hideout) linked loosely together with a daisy chain of narrative gaps.

Long Weekend (Synapse), Late for Dinner (Kino Lorber), Vengeance of an Assassin (Well Go USA), The Man With the Iron Fists 2 (Universal) are available on DVD and Blu-ray now. Also out this week:

The Babadook (Shout! Factory) Ba-ba-dook-dook-dook! A modern, undeniable cult success, director Jennifer Kent makes a kid's book into a source of pure evil. Even if you caught this in the cinema or on VOD, the Blu-ray release is a must-buy, if only for 1) the inclusion of Kent's original short, "Monster", 2) the excellent making-ofs, including a fascinating tour of the set and a discussion of color pallete in horror, and 3) the pop-up Mr. Babadook in the slip case. Read our full review here, and catch our interview with Kent, Bedtime Stories that Bite Back.

From the Dark (Dark Sky Films) Sometimes all a monster film needs is a monster, and this stripped-down Irish terror is a lean, mean, frightening machine. Read last week's DVDanger for an interview with director Conor McMahon and star Niamh Algar.

Manny This SXSW 2014 title, following the life and career of boxing phenomenon Manny Pacquiao, gets a home release on the eve of his long-awaited bout with Floyd Mayweather. The Liam Neeson-narrated doc gets a little hagiographic in places, and several deleted scenes, depicting the behind-the-scenes reality of boxing, should never have been cut, but it's still an intriguing portrait. Read our original festival review here.

DVD Watch, DVDanger, Kino Lorber, Synapse, Shout! Factory, Universal, Long Weekend, The Man With the Iron Fists 2, Late for Dinner, Vengeance of an Assassin, The Babadook, From the Dark, Manny