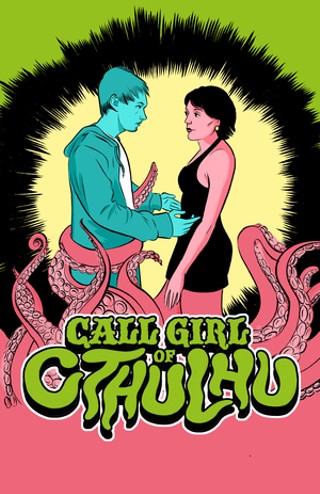 In the history of indie horror-comedy, the name Call Girl of Cthulhu is up there with The Little Shop of Horrors and Cannibal Women in the Avocado Jungle of Death. "The title did come first," admits writer-director Chris LaMartina.

Back in 2010, the Baltimore-based filmmaker was making a web series called Lost Trailer Park: Never Coming Attractions. He said, "Once a month we would do a fake trailer, and Call Girl of Cthulhu was one of the those." So he nearly blew the idea on a two-minute gag to live online with Psycho de Mayo and Santa Claus vs. Megasharkosaurus. "My producing partner Jimmy George said, 'That's too good to waste on a fake trailer.'"

Thursday night's special screening of Call Girl is the latest in an occasional series by Other Worlds Austin, the film festival dedicated to sci-fi and fantasy in all its forms. Outside of the actual festival, founder Bears Fonte has been putting on screenings of indie projects like revolutionary zombie flick The Dead Within, and Dark Mountain, a fresh take on the found footage format.

Call Girl of Cthulhu is a straight-ahead homage to the Reagan era of cheap gore and low-brow horror, when the cosmic terrors of H.P. Lovecraft were the genre's magnetic north. A hapless artist (David Phillip Carollo) falls for a prostitute (Melissa O'Brien), but soon finds he has rivals for her affections: namely a Cthulhu cult convinced that she will bear the spawn of the tentacled abomination and usher in a new age of babbling madness. Aside from Eighties-style gore and weirdness, the script is thick with the Lovecraft-loving bad puns LaMartina adores (look for references to The Music of Erich Zann and an X-rated nod to Miskatonic U). He said, "My favorite is when Wilbur, one of the henchmen, sprays the air freshener, and it's Doctor Muñoz's Cool Air."

The director grew up as the youngest of three kids, and the siblings watched a lot of classic schlock like Monster Squad. When he and his friends started making their own films, he said, "We felt there was a lack of fun horror movies coming out in the cinema." Instead, he was inspired by filmmakers whose work he watched on the couch with his siblings, like Brian Yuzna (Society), the Chiodo brothers (Killer Klowns From Outer Space), and Stuart Gordon (Re-Animator). "It's that no fear of failure attitude," he said. "It's, 'Here are our resources, and we're going to push it as far as we can.'"

To set the mood for his own film, he showed cinematographer Nick Baldwin cult faves of the time, like Vamp, Frankenhooker, and Def by Temptation. He's quite happy for people to see their influence: "We just started a new film last night, and one of the characters is named after the Chiodo brother."

The film itself was a quick turnaround: Two weekends of casting, a 40-day shoot, and a $40,000 budget, funded in part through Kickstarter. But it was mostly the kindness of friends and fellow filmmakers that got the movie made. LaMartina said, "In Baltimore, we're very blessed to have a very strong, supportive arts and film community, and because of that very few people got paid. Everyone was a volunteer, because they loved telling stories."

It was real hand-to-mouth cinema, with several scenes shot in the motel in which the cast and crew were staying. Then a major hiccup: "The church where we were supposed to be shooting heard we were making a horror film, freaked out, and changed the locks." Enter that Baltimore arts community: Baldwin's parents offered their basement, while LaMartina's mother, who is actually a carpenter, started building the Church of Starry Wisdom. The director said, "We gutted it in an afternoon, put up fake walls, and made a fake cult church."

Call Girl has already played a couple dozen film festivals, with more screenings lined up. LaMartina said, "Lovecraft is in vogue, because people love the Cthulhu mythos, but you also have a resurgence of Eighties gory horror films." In part, he ascribes that to a reaction to the current state of the industry. He said, "Most horror films coming out are very sobering. They're low-budget stories told to maximize profit." He laughed. "We make movies that we have no business making."