Death of an Extra: Odell Grant

Odell Grant, who had a face you couldn't forget, has died

Nobody had a face like Odell Grant. The lines curlicued and dug deep like an etching of the totality of time. Then he’d break into a grin and his light eyes would ignite with mischief and reckless youth. 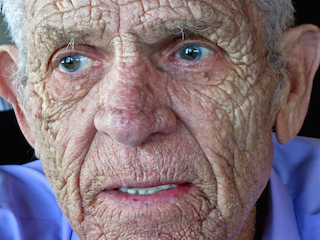 Odell only semi-jokingly called me his agent. I’d written a 2006 Austin Chronicle story about his life’s improbable last act as a film and television extra capable of stealing a scene, and he was convinced with my guidance he could become a story. Two years ago we met for lunch for the last time and he regaled me with tales from the set. “I was embalmed and buried in the low-budget film Elvis and Annabelle,” Odell says of the film in which he is featured as a dead coach. “I had my funeral. Nobody I know of has met their pallbearers.”

That was just a test run. Odell died for real Tuesday at age 79 surrounded by family and Jeanne, his wife of more than 50 years. The couple used to travel the state selling crafts at Sami shows, their daughter Lisa continuing the family tradition before she turned real estate agent.

Odell was a survivor. For the last few years, the former Killeen High School linebacker who played on scholarship at the University of Houston toted around an oxygen canister. He didn’t often go far from Lisa’s house where he and Jeanne moved after finally admitting Mother Nature was tougher than they were stubborn.

Back in 1981, Odell got his first starring role in the 1981 Shoal Creek flood that devastated their central Austin neighborhood. He was seen sloshing through the water that invaded every crevice and filled it with gooey despair. Each anniversary brought out the TV footage. There’s Odell trying his best to weather the storm through strong, worried eyes. Again and again. Neighbors sold and moved on, but Odell and Jeanne battled through $90,000 in damages as long as they could.

In 1999, he and Jeanne were run off the road, and Odell’s back was broken. Later Jeanne was diagnosed with pulmonary embolisms and given six months to live. He donned a back brace and began to heal; Jeanne got experimental surgery that saved her life. But their craft business fell to the wayside and the never-resolved house-repair bills still loomed. Odell fell into a funk.

His savior was a chance meeting at Kinko’s with a woman in the acting biz. “She said ‘Your face has outstanding characteristics,’“ Odell told me. “I said, 'Do you mean I look old?’”

He was soon a zombie in Planet Terror (Robert Rodriguez’s section of Grindhouse), and an anonymous anybody in Stop-Loss. But the Austin-shot television series Friday Night Lights truly embraced him. He was cast as a fan in the football stands, a Texas Ranger roaming the sidelines (“I just stood on the sidelines like a goony bird, but, hey, they paid me for it,” he told me.) and then as a member of the football team booster club. The latter role led to an actual line of dialogue, a few pestering words aimed toward Kyle Chandler’s Coach Eric Taylor in the show’s final season.

During our Threadgill’s lunch of chicken fried steak, I kept sticking my camera in Odell’s craggy face. He showed me a photo of him taken at a Sami Show that had earned a photographer a college scholarship. One of the photos I shot that day would end up chosen for a photo show. Odell was feeling ambitious. He showed me a party invitation featuring photos of him in a coffin from Elvis and Annabelle. He went on to see his granddaughter marry. He never stopped grinning back at whatever life threw at him. He never stopped dreaming. 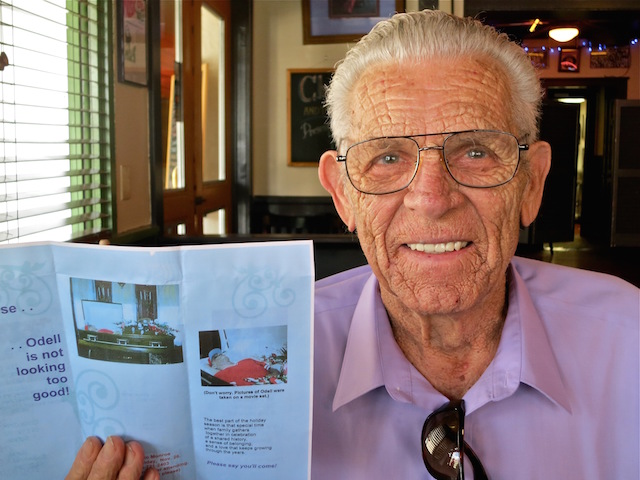