Back in the home-release stack after SXSW

When it comes to horror in Austin in March, all eyes are on the screens of SXSW. But the world rolls on, and the horror home releases have been stacking up. Let's start with Animal, aka the horror story Drew Barrymore produced. No, for real, but then she's always picked slightly unconventional projects. For example, Ever After: At the time, it was a fantasy oddity that made little box-office impact. In the current cinematic climate, its High Rennaisance take on the fairy tale standard of Cinderella (complete with Leonardo da Vinci) would be a post-Snow White and the Huntsman summer tentpole palate-cleanser.

Animal is not that revolutionary. In fact, it starts as a generic monster flick: kids in the woods (mandatory couples, siblings, spare friend, pick the order in which they are eaten), rubber-suit creature, light ecological message. In many ways, it re-enforces exactly how damn good Eduardo Sanchez's Texas-set Big Foot flick Exists is, and how easy it is to churn out a generishocker. But if it's not at the peak of the genre, it's still a cut – maybe even a gouge – above the median. The change comes when the survivors hole up in a lodge and find they're not the only ones there. That's when it heads into a combination of Feast sealed-can territory, and the best lessons to be learned from the original Alien – that is, the less you see, the more you fear the beast.

Where it really works – or will send you screaming into the woods, hoping to get your eyeballs devoured – is in the third act. The second has the most tension, particularly during one sequence with red flares against a forest night. But the closing chapter throws in some fascinating and unexpected character beats, including a great "Why are you telling me this now?" moment that shows why oversharing in the middle of a monster movie is always a bad idea.

It's yet another semi-success for director Brett Simmons, who seems to be the Chiller Network's MVP. OK, so that's like saying you're the SyFy Network's go-to guy, which is not that much of a claim to fame. But coming on the heels of his take on The Monkey's Paw, which is pleasant-enough rainy Saturday afternoon cheesy fodder, it's not bad. Plus, if you ever wondered what happened to Joey Lauren Adams, this is definitely for you. 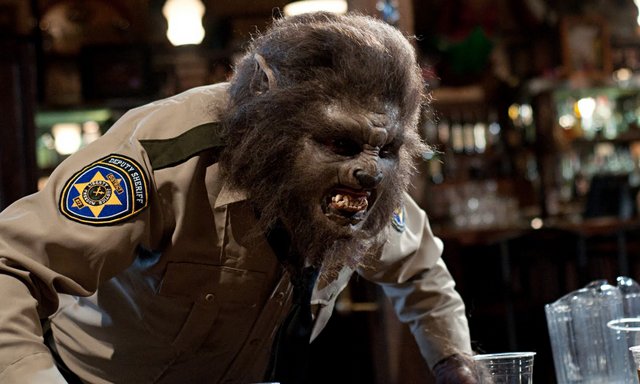 "What do you mean, you're out of floss and lint rollers? Forget it, I'll just lick myself clean." Wolfcop deals with some new sanitary issues.

You're far less likely to spot any recognizable faces in the low-budget horror-comedy Wolfcop, which is about as subtle as its name suggests. Small-town Deputy Sheriff Lou Garou (no, really, played by Leo Fafard) is the worst cop in a one-horse town. As he slurps down the free boilermaker at the local drinking hole, he proudly admits that he hasn't done any real law enforcement in years. Probably a good idea, in a town whose biggest festival is the annual drink’n’shoot.

So that’s the cop. What about the wolf? Lou wakes up one morning with a hangover, a pentagram carved into his chest, and the disturbing habit of turning into a werewolf when the moon is full. On the positive side, at least now he’s a good cop. Throw in some good-ol' low-cost horror-comedy tropes (gangsters in cahoots with local politicos, no less), some surprisingly inventive gore gags, rival love interests for the lycanthropic lawman (Amy Matysio as strait-laced cop Tina, and Sarah Lind as lascivious barmaid Jessica, replete with Little Red Riding Hood fetish) and what you basically have is an R-rated Teen Wolf.

Unsurprisingly, this is Canadian. Their indie industry’s strong point seems to be OTT gruesome laffs, as typified by the Astron 6 collective, and Other Worlds Austin 2014 title Bloody Knuckles. Unafraid of being grotesque or gutter hilarious (let's put it this way: the first part of Lou that transforms is the one part of a werewolf you never see), it's a perfect pizza-and-beer movie. Plus, it has a werewolf with a gun. Can’t beat that. The spirit of Eighties horror is smeared all over Muck

Part of why Wolfcop works is that it knows exactly what it is. By comparison, fourth-wall buster Muck is as self-aware as a rock.

Like Animal, it's twentysomethings in the woods, but there is literally no set-up. This starts with the gang battered, mutilated, one of them potentially bleeding to death, and their first instinct is banter. Billy (Grant Alan Ouzts), in between hemorrhaging on the couch of the abandoned house in which they're hiding, is a one-man blood-soaked Greek chorus. Cross Randy Meeks in Scream, and the doomed-but-kindly yakuza flunkie in Everly, and it's pretty clear that he's Basil Exposition for whatever this massacre is. And then the entire film becomes a succession of boob shots, and you'll wonder how this got Kickstarted.

This so desperately wants to be a commentary on classic schlock horror. Writer/director Steve Wolsh intends it as the middle part of a horror trilogy, and is reportedly in pre-production on prequel Muck: Feast of St. Patrick. He clearly knows what he's spoofing, but rather than dismantling the standards and cliches of the genre, he just repeats them, often to the point of absurdity.

Yes, we know teens do dumb things in horror movies, but that doesn't mean everything your characters do has to be stupid (shower breaks during a chase sequence, and stopping for shots when you're supposed to be calling the cops are particular high points).

Yes, we know that slasher flicks hired as many Playboy models as the budget would cover, and got them topless as fast as possible, but that doesn't mean the tension has to stop for a Skinamax outtake every five minutes.

And if you're going to hire king of the killers Kane Hodder (Friday the 13th VII-X, Wes Craven Presents Wishmaster, Hatchet I, II and III), you don't waste him. Seriously, there's more time spent talking about how to jumpstart a cab than letting one of the all-time great monster actors do what he does best.

This is the kind of project you so want to succeed. You want it to be the next Tucker and Dale vs. Evil. At 98 minutes, it's a good 20 minutes too long. So maybe with another edit, there might be a good film in here, a more conventional horror, with Lachlan Buchanan as annoyingly effective asshole hero Troit at its core. True, "The next thing that creeps or crawl even near me, shovel to the fucking face!" is scarcely "This is my boom stick!" but it hints at a much better, straight-ahead horror comedy.

Maybe Parts 1 and 3 will fix this. As is, it feels more like a half-baked Scary Movie rip-off than a well-considered satire. And, seriously, if anyone can work out why a parked car suddenly flips over for no good reason, tell the rest of us. Teeth & Blood, or, Pardon Me, But You're Making Blacula Sad

More deliberately and accidentally entertaining is Teeth & Blood, a cut rate Blade. This is a bad urban vampire movie that takes place on the set of a bad vampire movie. Shorter version: Imagine if Bowfinger wasn't funny, but was in fact directed by Steve Martin's character. When the star of the dismal Chapel Blood is found dead in her dressing room, the cops are called in – and you really wish they weren't.

The overblown media spoof is pretty entertaining if that's what the filmmakers were going for. Plus, I would pay good money to recast Kenan Thompson as Chapel Blood's chief vampire. But the film itself feels like the film-within-a-film that a better movie is spoofing.

Austin Psych Fest Live (Sunday): Think No Think
Whoever managed the Levitation Tent did these psychs no favor