Lone star shorts program is, appropriately, all over the map

For a program based around a single geographic location, SXSW’s Texas Shorts is all over the map. Thematically speaking, that is. Filmmakers from the Lone Star State cover the gamut from silly to serious, from CGI animation to gritty street shots.

James M. Johnston’s “Melville" is an exercise in defying expectations. The main character is not only a bearded, African-American coffee roaster in Ft. Worth who dresses like a hipster ranch hand, but also a formerly aspiring hip-hop stylist who uses his chosen art form to deal with a diagnosis of cancer. It’s the coolest Cow Town has ever looked.

“Darknet Delivery” takes us to Manhattan where a group of friends negotiates the hardships of adulthood, an Internet drug buy, and the difficulty of relationships. While it was successful in interweaving several topical issues, including radical libertarianism, it was hard to have much sympathy for the bad choices of the rich and not famous. Some flaccid acting and a contrived plot didn't help.

SXSW favorite Anna Margaret Hollyman (7 Chinese Brothers, Funny Bunny) stars in Allison Cook’s "Woman of the World," providing some much-needed mothering in the Hollywood Hills. Andy Irvine and Mark Smoot’s "+ / -" takes place before motherhood begins as a couple grapples with what to do about a possible unexpected pregnancy in the minutes before the results of pregnancy test are revealed. The “what if” hangs over the pair like a dark cloud.

The darkness continues in "Carne Seca” from Jazmin Diaz. Two young brothers struggle to deal with their father’s abusiveness in rural Mexico. In “Squirrel," a visual poem by Tomas Vengris, a mostly faceless teen narrates her descent into a sordid sexuality featuring Sixth St. as a backdrop.

There’s a lighter side as well. Austin Tolin's "Detective Calzone" is as silly as its title would indicate; think CSI meets Naked Gun. Joe Nicolosi’s "Star Cadets" brings absurdity into outer space as a couple of bro wingmen deal with boredom and pickles. 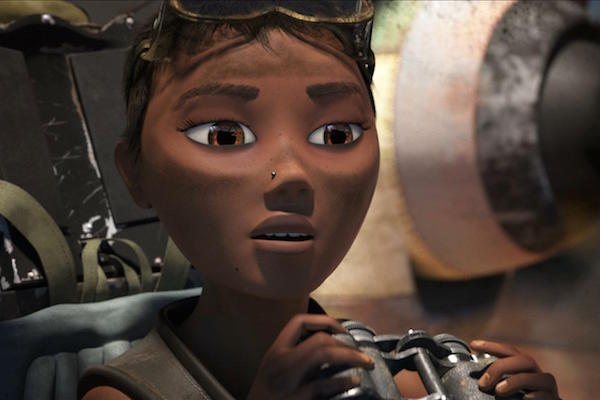 "The OceanMaker” by Lucas Martell stands out as the only animated piece on the card. A dystopic future bereft of hydration (imagine Waterworld in reverse) sees the survivors fight over who can harness water from the few clouds that remain. This unspoken work speaks volumes with its stunning visuals and fast-paced action.

The program ends with its most arresting piece. John Bryant’s "The Samaritans” was shot near Marfa and features a most scathing examination of religion gone horribly wrong. It is cringeworthy in multiple ways.