Adam Green is Digging Up the Marrow 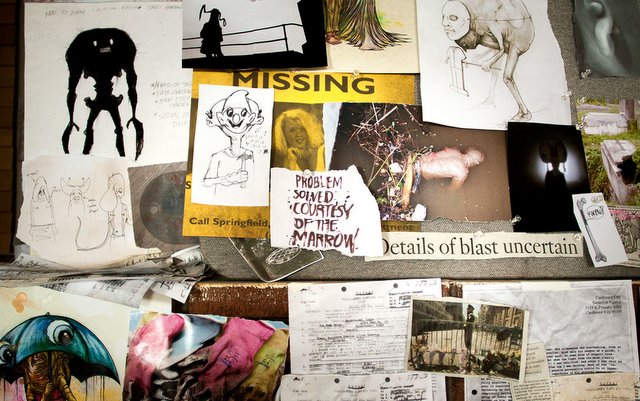 There are monsters in the air, and Adam Green knows exactly where they are: in the cargo hold of the plane, as he and artist Alex Pardee bring their new collaboration Digging Up the Marrow to Austin this week.

That will be the fifth date in a madcap tour of the U.S., taking in Los Angeles, San Francisco, Boston, New York, Austin, and back to L.A. Talking to Green last week, he explained, "I'm still in L.A. at Ariescope [Pictures], and I leave tomorrow morning to start the tour. And of course, I'm shooting something tonight, and I go right to the plane."

Producer/director Green has made a nice little side business as an actor, usually playing himself. It started with his 2000 short "Coffee and Donuts," which became the effective pilot for Holliston, his FEARnet sitcom with longtime friend and creative partner Joe Lynch. Those self-portraits have been fictionalized for comedic effect: In Digging Up the Marrow, it's all about the terror. This Green is much closer to the real-life man than the goofy sitcom version, but life gets strange when he falls in with an ex-detective (Twin Peaks' Ray Wise). From there, the fake documentary delves into the world of movie monsters, poster art, obsession, delusion, and a place called the Marrow. Green said, "The less you know going into it, the better." He's spent the film's four-year production process keeping its true nature a secret, explaining, "If for years people had known what the cast was, or what the premise was, or asked for set visits and stills, I think it would ruin the movie for the audience."

A film that deliberately hides what it is? That all sounds like a PR nightmare, but the famous loyalty of Green's fans, whether he's doing full-bore gore like the Hatchet franchise, or a cerebral creeper such as Spiral, is proving immense. He said, "We did a screening here in L.A. Monday night, and when I asked how many people in the theatre had seen the trailer first, only two people raised their hands. Nobody wanted it spoiled."

The only thing that everyone knows about the film is that it features Pardee's distinctive monster artist. It's a pivotal part of the tour, which is something Green always planned to do with the movie. And it's not just him sticking a print in his backpack and taking it around the nation. This is as much an art show as a screening, with original work by Pardee, and a special prop from the movie that needs to be seen in its full, three-dimensional glory. Green said, "The idea was, because this was based on an art exhibit, let's go one step further."

In part, he admits it's a response to the shifting market for indie films. "You put out a trailer for your new show or your new movie, and the first question you get back is, 'When is it going to be on Netflix?' Because they're not going to buy a DVD, they're not going to go to the theatre, they're not even going to seek it out on television. Everything is Netflix to them." Between the old revenue streams drying up and piracy, "for a small movie like this, it can kill you."

He admits this tour will be an expensive endeavor, and a logistical nightmare, with what he called "a circus of boxes" being shipped between venues. "Of course, we're doing this and going to the East Coast in the middle of the worst winter they've had." However, it's worth the effort. "The fans deserve more," he said. "I can't think of another movie that was inspired by an art exhibit, and then you see the movie, and then you can walk through the exhibit and see how everything was made and where it came from. Getting back to the original spark that made us excited, it was merging art and film. So even in releasing, we're doing that."

The Digging Up the Marrow tour reaches the Alamo South Lamar, Feb 18. Tickets at www.drafthouse.com.

The film is released on VOD on Feb. 20, and DVD and Blu-ray March 24. Come back for a fuller interview with Green about the origin of the Marrow, and his long, personal struggle behind the lens.

DVDanger: Digging Up the Marrow
Adam Green on the long and very personal path of his new feature