Or, in defense of found footage and mockumentaries 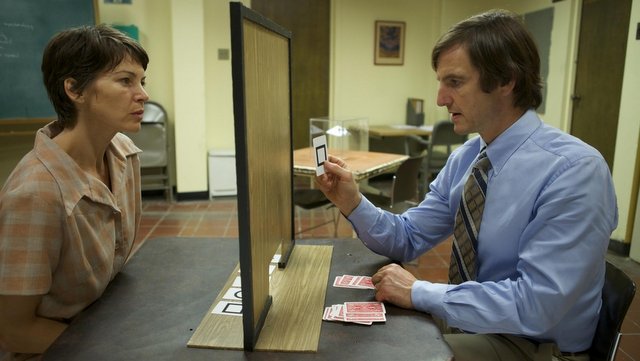 "Is this your card?" Evil awaits behind the screens in The Atticus Institute.

In the 1990s, it was predictable that a slew of unmemorable, sub par romantic comedies would emerge every summer. By contrast, this decade has become a quagmire of supernatural found footage horrors set in mental institutions. Most of them are terrible. The Atticus Institute, quite surprisingly, is actually pretty good.

Found footage and the mockumentary format has become the entry point for low-budget filmmakers. Unfortunately, it's also become the whipping boy for critics. Yes, there are a lot of low-quality found footage movies out there. And, yes, some filmmakers do use the format to cover their technical ineptitude and/or laziness: Ooh, look at us, we found an abandoned hospital, and we're going to make spooky noises with a cheap DSLR. It's basically a cottage industry built around ripping off Grave Encounters, which wasn't that good to begin with.

The terms, sadly, get abused and misunderstood. A mockumentary is a full-fledged fake documentary, in the mode of Spinal Tap, Waiting for Guffman, and the upcoming What We Do in the Shadows. That means that when people called The Sacrament found footage, they were wrong. Found footage, by contrast, is when the material has supposed to have been found by a third party, and then constructed into a film: So, The Blair Witch Project and Paranormal Activity.

Here's your guide: If a single character survives with the camera in their hand, then it's not found footage.

Confusion is rife, and the problem really starts with the original, Cannibal Holocaust. It's called the first found footage horror, but it's really the progenitor of the format. Yes, it has found footage components, but then the opening and closing sequences are so clearly a movie that it's just a tonal change.

The Atticus Institute works because it knows the difference. It is supposed to be a contemporary documentary, using archival footage and modern talking heads, and it nails the format. That may sound like a low bar, but clearing that hurdle has defeated many other films.

It is also bathed in both periods. In the modern moments, the survivors of a bizarre incident at a facility experimenting with psychic powers look back at what went wrong. In the archival footage, it's 1974 at the titular Atticus Institute, as Dr. Henry West (William Mapother) pins his hopes on the strange phenomena surrounding the tragic and mousy Judith Winstead (Rya Kihlstedt from Dexter and underrated creature feature crowd pleaser She Creature). The fact that neither West nor Winstead aren't being interviewed for the documentary implies something may not have ended so well.

So far, so The Quiet Ones, but The Atticus Institute stands above this increasingly predictable crowd by being subtly and convincingly eerie. It's clear that the scientists – and later, the military determined to weaponize ESP – are stepping into a terrible, dark place. There's a well-worn path being trod, and it's up to the survivors to look back and play Greek chorus to their own failures and hubris.

It's a sterling addition to the subgenre by writer/director Chris Sparling. He made a breakout reputation for himself by writing the high-concept claustrophobia thriller Buried, before disappearing after scripting the mediocre ATM. This, if not revolutionary, undoubtedly makes him a slow burn horror talent to watch. It's in the melding of elements: the historical truth of the Seventies' obsession with psychic phenomena, and the real experiments meant to curtail the Cold War; the strong cast, none of whom has to carry a well-rounded ensemble, but who all get their moment; and a firm grasp of when found footage stops and mockumentary begins. The end result is somewhere in the tragic realm of one of the most underrated mixed-format horrors, Australian tragedy Lake Mungo.

The Atticus Institute (Anchor Bay) is out on DVD and Blu-ray now. Also out this week:

Coherence (Oscilloscope Laboratories). A Fantastic Fest 2013 breakout, one of my festival top 10 picks for that year, and a rare four star review from us. James Byrkit's microbudget indie sci-fi drama, set against during a blackout at a dinner party, raises the bar for what is possible with a few friends and a camera. Cerebral, heartfelt, challenging, and engaging, with a great performance from Nicholas Brendon (Buffy the Vampire Slayer's Xander) as a fictionalized version of himself.

Attack of the Morningside Monster (MVD/Apprehensive). At the opposite end of the spectrum, another turn from Brendon, who consistently is better than the material around him. In Coherence, he helps elevate something wonderful. Here, a hodgepodge and gory mess of small-town hoodlums, cannibalism, and South American death cults, he shines among the debris as a nebbish guy trying to protect his cancer-riddled wife. He clearly has the chops to pull off a sensitive, touching performance, but here he's wasted among a cast that mostly looks like it's reading offscreen cue cards. At least the gore is cheesy fun.

Collar (Unearthed) won't even claim its gore is a distraction – it's the real purpose of this extreme horror shocker, with zero-budget schlock's go-to monster Nick Principe (the poor filmmaker's Kane Hodder, best known for the Chromeskull franchise) as a homeless Satanist mass murderer. The aim seems to be a modern take on exploitation classic Maniac, but that's been done, and this just becomes an endurance exercise in scum-watching. Even some observations on bumfight culture can't save it.

The Mule (Xlrator) is more lavatorial than blood-drenched. Leigh Wannell, the scribe behind the Saw and Insidious franchises, and Insidious star Angus Sampson take an unexpected turn into crime comedy with this oddball SXSW 2013 title about milquetoast Okker Ray (Sampson), peer-pressured into jamming a kilo of heroin up his backside to smuggle into Australia. Not the sharpest knife in the block, when he gets detained, he decides his only way out is to not releasing the evidence to the authorities – for 12 farting, disgusting, and increasingly life-threatening days. Sampson gives Ray a sweaty naivety as the desperate players outside his hotel room get increasingly brutal, while Ewen Leslie and a scenery-chewing Hugo Weaving play good cop/dismissive bully cop with pantomime glee.