Frederick Wiseman’s docs may be varicose-vein-inducing, but his deep dives into institutions large (a state mental hospital, the Paris Opera Ballet) and small (Austin’s Lord’s Gym) are well worth the often three-hour-long running times. 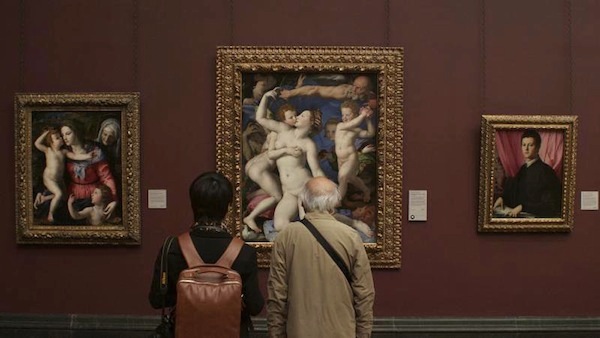 His latest, National Gallery, explores the vaunted London art museum, from what hangs on the walls to what goes on behind the scenes in the conservation department, the boardroom, and the after-hours dismantling of an exhibit. In addition to being unique for forgoing customary documentary aids like voiceover narration or title cards, Wiseman’s films are fascinating for being so egalitarian: His camera is as keen on the work of the gallery’s frame makers and flower arrangers as it is on the executive director and the fabulously entertaining docents. And the unhurried approach allows time for the mind to really roam – to soak in the majesty of Rubens’ “Samson and Delilah” or marvel at the smaller but no less worthy attraction of looking at humans looking at art, as they go through the universally recognizable paces of museumgoers everywhere (the lean-in, the tilted head, the furrowed brow, the half-smile).

At last week’s AFS screening, Wiseman explained via Skype interview that he spent three months on location at the National Gallery with almost entirely unfettered access. (The only thing off-limits – meetings in which personnel issues were discussed.) It took him 13 months to cull a three-hour film from 170 hours of footage, and it was in the editing room that certain themes emerged, most especially in how the separate threads were united by “how to tell a story,” he said – in painting, in talk about the painting, in a dance or poem inspired by the painting, and so on.

Wiseman – who said he's lately been working on a French radio documentary about Emily Dickinson and with a choreographer on a ballet based on his groundbreaking first film, Titicut Follies – also emphasized something National Gallery director Nicholas Penny says early in the film, that an “interesting failure” is preferable to a safe exhibit of mass appeal. Wiseman made the same comparison to Hollywood studio filmmaking’s emphasis on “commercial populism.”

The Austin Film Society presents an encore screening of National Gallery this Sunday, Jan. 11, 2pm at the Marchesa Theater.