Vampires, hip-hop, cults, and odd romance are our unreleased faves 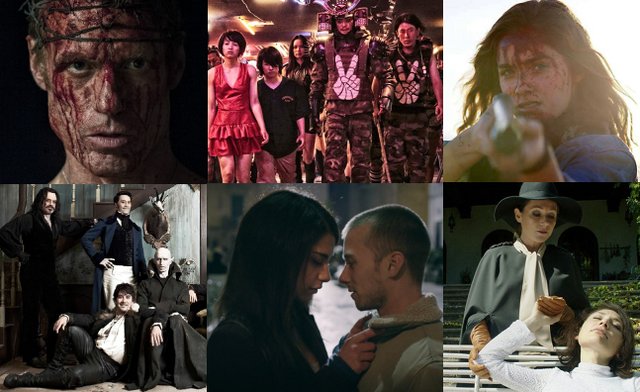 Coming (maybe) to a cinema or VOD platform or DVD near you, some of the 2014 festival circuit's best (clockwise from top left: Let Us Prey, Tokyo Tribe, The Well, The Duke of Burgundy, Spring, and What We Do in the Shadows.

2014 is dead, done and gone. But we'll be living with the legacy of its film festivals for months to come. Here's a completely arbitrary selection, in no real order, of some of the titles we liked last year, and think you'll want to see this year.

While another Drafthouse/Fantastic Fest acquisition, The Tribe, had critics talking, only one had them singing. Sion Sono wouldn't know how to be boring if he tried, and his insane … how do you … gah. OK, let's just say that he throws Japanese hip-hop street gangs, the yakuza, mystical mob bosses, long tracking shots, urban poverty, Daisy Age positivity, and tanks, and takes them all to a place where stunt sequences and dance routines blend. Trust me, you'll be singing "Tokyo tribe, never ever DIE" all the way home. I did.

Chances You'll See it: No solid word of a U.S. release date yet, but XYZ Films has picked the US rights up.

2: What We Do in the Shadows

Who knew that we'd all been waiting for Jemaine Clement from Flight of the Conchords to do a feature-length riff on the video for the Bloodhound Gang's "Altogether Ooky"? Mockumentary What We Do in the Shadows takes the vampire myth out of its comfort zone and straight to New Zealand, with four bloodsucking nightcrawlers sharing a house in suburban Wellington. Delicately funny, filled with cutting one-liners and delightfully awkward situation comedy. 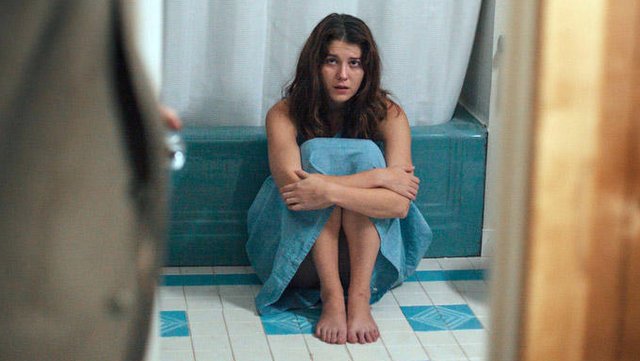 Sharing much of the cast with one of my favorite gonzo action/slasher hyrbids ever, The Guest, Faults could not be more tonally different. Leland Orser plays a washed-up cult deprogrammer named Ansel Roth, hired to get a young woman (Mary Elizabeth Winstead) back with her family. What quickly and disturbingly unfolds is not just a battle of wits, but a Beckett-meets-Mamet descent into interpersonal darkness. Orser gives one of the year's best performances, while Winstead's aura of blank innocence gives director Riley Stearns space to take the movies to incredibly dark places. As I wrote during SXSW, "Stearns' graduation to the feature leagues may be the most quietly impressive since Craig Zobel opened up the Great World of Sound."

Excellent. Screen Media Films has picked it up, and has scheduled a March 6 release date

The American falling in love abroad: From Roman Holiday to Before Sunrise, it's been a mainstay of cinema. Spring looks like its sole twist on the standard is that Evan (Lou Taylor Pucci) is on the run from the cops after a bad bar fight when he washes up in rural Italy, and falls for Louise (Nadia Hilker). However, she has far bigger concerns than just running away from regal responsibilities. If you think the big reveal of her fate is the big twist, then co-directors Justin Benson and Aaron Moorhead can't wait to turn everything on its head. Owing as much to Woody Allen as it does to F.W. Murnau, this is one of the most successful balancing acts in years, and a potential breakout arthouse hit.

Chances You'll See it: Drafthouse Films picked this up, and is promising a (guess what?) Spring release.

5: The Duke of Burgundy

At first glimpse, director Peter Strickland's follow-up to his sonic horror Berberian Sound Studio seems darkly sensual, with a dom (Sidse Babett Knudsen and her sub (Chiara D'Anna) dwelling in a world of fetish play and obsession. In fact, it's a daringly hilarious sex comedy, with some deliciously Pintereseque overtones. Wigs, butterflies, mannequins, and one of the most ridiculously risque sequences about shopping for furniture conceivable.

Chances You'll See it: Sundance Selects has kindly given us something to look forward to during the Winter doldrums. The perfect date movie for the delightfully perverse opens Jan. 23.

An arid take on the apocalypse, mixed with the current YA fiction dystopian fixation: writer Jacob Forman and director Tom Hammock were inspired to tell this tale of a dessicated future after they wrapped work on All the Boys Love Mandy Lane. Low budget, totally timely, and strongly led by newcomer Haley Lu Richardson as a girl protecting the last drops of water on her land, its true secret weapon is the Shakesperian relationship between deluded water baron Jon Gries and his warped daughter, America's Next Top Model winner Nicole Arianna Fox.

Chances You'll See it: Dark Sky Films gets a great pick. No confirmed release date yet, but we'll keep you informed.

Ghosts as a sexually transmitted disease? How did Hideo Nakata not do this first? Maika Monroe (another alumnus of The Guest) is a bored Detroit teen who has a one-night stand. Simple enough. Then the object of her desire informs her that he's transferred a ghost on to her, one that will kill her unless she sleeps with someone else. So far, so Ringu, but those comparisons soon fade. The kids have that dissolute Terry Zwigoff/Todd Solondz feel, but director David Robert Mitchel (The Myth of the Great American Sleepover) adds a cool air of creeping dread. Part 1950s sex hygiene movie, part supernatural horror, wholly original.

Chances You'll See it: Again, good news. Radius TWC picked it up straight out of Cannes. No release date set yet, sadly.

A young girl is accidentally rescued from a child murderer when someone comes to his door. Years later, she's become a police officer (played by Pollyanna McIntosh) at a small Irish police station, when hell comes knocking in the trench coat-draped form of Six (Liam Cunningham, aka Davos Seaworth from Game of Thrones). Not since Calvary has there been a film more likely to piss off the National League of Decency, nor has there been one that really tests the definitions and subtexts of faith. Admittedly, this does all that under the guise of being a smart, tense, disturbing, and sly horror film.

Chances You'll See it: Already acquired by Dark Sky Films. Check back for a 2015 release date.

Devised as a graduation project for the acting class at the Media College Amsterdam, Capsule is one of the most intriguing and heart-wrenching oddities of the year. The ensemble cast goes through the horrifying banalties and touching dramas of everyday life, all under the threat of the end of the world. Bleak, haunting, and yet desperately human.

Chances You'll See it: Sadly but not shockingly, no word yet on a U.S. release for one of the most impressive student films you'll ever see.

Joe Lynch is legitimately one of the nicest, funniest people working in cinema today. Just look at the level of support he got when his LARPing comedy Knights of Badassdom got screwed over by the distributors. Instead of moping, he dusted himself off, flew to Serbia, and cast Salma Hayek in one of the craziest, most violent, and gleefully politically incorrect action films in years. Hayek plays a kidnapped mother, forced into prostitution by the yakuza, who decides she's going to get out in the bloodiest way possible. What makes this a cut above the rest is that Lynch set himself a rule - the camera never leaves the apartment she's stuck in - and assiduously stuck to it. Brilliant and ridiculous, all at the same time.

Chances You'll See it: Great. Dimension Films has scheduled it for Feb. 27.

With one vampire movie already on the list, I couldn't justify taking three slots by adding simple Irish bog monster chiller From the Dark, or Chilean cousin to Near Dark, the brooding The Stranger. Same reasoning is why I didn't put 2013 fetish comedy and 2015 Drafthouse release R100 on the list. MondoCon got the world premier of fascinating comic documentary Future Shock! The Story of 20000AD. Meanwhile, I've seen early footage from locally shot horror-comedy Found Footage 3D at local film-boosters The Show, but we're still waiting on the final product.

And while we're talking, what happened to last year's unreleased list?

Found: One of my favorite distrubing lo-fi horrors, this tale of a boy and his serial killer brother astoundingly made its way to Walmart DVD shelves.

Coherence: This actually got a full theatrical release, and actually garnered one of our rarer-than-hens-teeth four star reviews.

Death Metal Angola: Director Jeremy Xido schlepped this amazing tale of rock among the landmines to every festival that would have him, and rightly got a theatrical and VOD release.

Love Eternal: I had low hopes that this tender, thoughtful meditation on necrophilia and Cotard's Delusion, aka walking corpse syndrome, would ever find a distributor, so be thankful for VOD.

Blue Ruin: Macon Blair quietly scorched in this revenge tale, and after a theatrical release it's been burning up a lot of Top 10 and year-end lists.

The Strange Color of Your Body's Tears: Hélène Cattet and Bruno Forzani's neo-giallo is a visual trip you get to unpack again and again, courtesy of a recent home DVD from Strand Releasing.

We Gotta Get Out of This Place: The best thing Jim Thompson never wrote, co-directors and siblings Simon and Zeke Hawkins' twisting Texas crime drama has emerged retitled Bad Turn Worse, and simmers its way to DVD this January.

The Sacrament: No secret I'm a sucker for the work of director Ti West, actor AJ Bowen, and actor/director Joe Swanberg, but their collaboration on this Jonestown Massacre-inspired drama, on DVD, has some of this year's most enthralling scenes, as Bowen faces up to cult leader Gene Jones.

Grow Up, Tony Phillips: Hometown girl Emily Hagins' last and most accomplished Austin film before she took off for the City of Angels is out on DVD now.

SXSW, Fantastic Fest, Other Worlds Austin, Top 10s, Capsule, The Duke of Burgundy, Everly, Faults, It Follows, Let Us Prey, Tokyo Tribe, The Well, What We Do in the Shadows