One in a Crowd: The Honor Farm

Austin documentary expert Karen Skloss takes us back to school 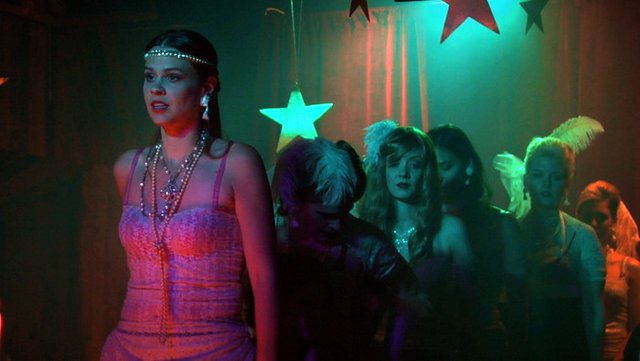 The kernel of the story – a prom night gone horribly wrong – actually stretches back to Skloss' 2002 short "Smitten," which played multiple festivals and screened at the Cannes market. "That was a coming of age story for a young girl, and I had that idea bouncing around my head for a long time," Skloss told the Chronicle. She put that one project on the back burner so she could concentrate on her production career and raising her daughter. Two years ago, when she felt the time was right, she started working with Jay Tonne Jr. to flesh out the story. That's when he told her about the Honor Farm. Part of the Colorado State Insane Asylum in his home town of Pueblo, Colo. Skloss described it as "the quintessential suburban satanic place, where bored kids go when they want to be scared. I was bringing this girl's story, and he brought this crazy, scary part."

A multi-time Austin Film Society Grant recipient, Skloss is probably best known as a documentary editor on projects like Be Here to Love Me: A Film About Townes Van Zandt, and Taken by Storm: The Art of Storm Thorgerson and Hipgnosis. However, she also has a raft of shorts on her resume, a background in video installations, and was actually a child actor herself. In 1993, she starred as Odile in Odile & Yvette at the Edge of the World, and that was how she got interested in the mechanics of filmmaking. Twenty-one years later, she said, "I'm chomping at the bit to get back to narrative, but the documentary will definitely inform it."

The cast is already in place, and has become the third component of developing the story. Skloss took actress Katie Folger (Grow Up Tony Phillips, Zero Charisma) and her fellow cast members – Will Britain (A Teacher), Dora Mason Burge (Friday Night Lights) and Olivia Applegate (Revolution and, with Burge, the upcoming Untitled Terrence Malick Project) – to the actual prom at Austin High. The footage she shot there will both open the movie and help fill in some blanks about the characters for the rest of the story.

Behind the camera, Skloss has assembled a roster of increasingly recognizable local names, starting with superstar cinematographer Lee Daniel (the eye behind most Linklater movies from Slacker to Boyhood, and a previous collaborator with Skloss on her 2009 personal documentary Sunshine), and a production team including David Hartstein (Where Soldiers Come From), Morgan Coy (Lovers of Hate and Computer Chess) and (full disclosure) Chronicle editor Louis Black as an executive producer. He writes, "Obviously I hear about an enormous number of projects being developed, I was attracted to this project because of my enthusiasm for Karen Skloss' brilliant work as a director and editor. The talented cast and assembled crew just made it irresistible to get involved with The Honor Farm. This is truly a film on which the stars have aligned."

The production is still looking for investors, but is using crowdfunding to help get the project going. Skloss said, "Kickstarter is a nice padding to ensure that we will be able to start filming in the spring." You can back the film via its Kickstarter page, or find out more at www.thehonorfarm.com.