DVDanger: Horror in 150 Words or Less

Putting a stake through some recent terror releases 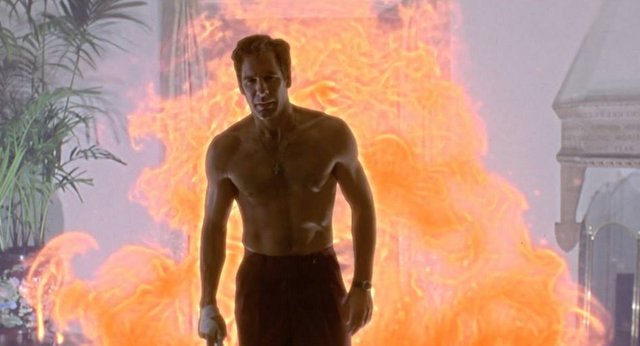 The post-Halloween season is supposed to be all mist and mellow fruitfulness. Instead, the home-release racks have been bloodier than Jason Voorhees' cutlery drawer. But time is short, so let's get slashing.

Two months ago, Scream! Factory released the quasi-mythical director’s cut of Clive Barker’s Nightbreed. Now, his second most-underrated film – 1995’s Lord of Illusions – gets the director’s cut/special edition treatment. Self-adapted from his novella The Last Illusion, this is Barker creating a horror hero. Scott Bakula plays Harry D'Amour, a New York P.I. dealing with sorcerers and stage magicians in Los Angeles: Castigated on its original release, the film never gained the cult sheen of 1991’s similar TV movie Cast a Deadly Spell, but time has enhanced its arcane fusion of classic noir, and Eighties supernatural horror. Bakula tries too hard to channel his inner Alan Ladd, but there’s some intriguing tensions among him, a pre-GoldenEye Famke Janssen as femme fatale Dorothea, and Kevin J. O'Connor (best known as The Mummy’s sleazy sidekick Beni) as Swann, a proto-Chris Angel with an inside track to the dark side. 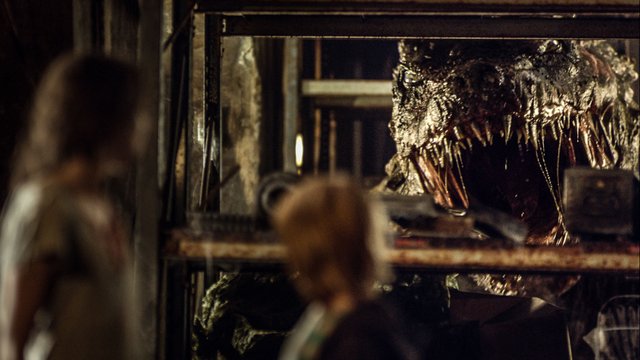 Like The Mummy, Ragnarok proves PG-13 horror can have a little guts. Most teen-friendly terror waters down a potential R rating for more bucks. This Norwegian monster movie takes the Gooseumps tack of taking a kids' tale and punching it up. Viking researcher/single father Siguard (Pål Sverre Hagen) drags his disgruntled kids to remote Northern climes after annoying one grant body too many with his theories about the Oseberg ship, one of Scandinavia's most important archeological sites. Director Mikkel Brænne Sandemose swaps the serial-killer chill of his debut feature Cold Prey 3 for clear nods to blockbuster-era Spielberg (think Jurassic Park, Indiana Jones, and Jaws) as the family explores the gorgeous extremes of remote Scandinavia, where lurks a world-ending sea serpent. Like a more thrilling National Treasure, and kin to Finland's mad massive Santa movie Rare Exports: A Christmas Tale, it's perfect fodder for tweens and parents demanding something edgier.

A starter horror for many British terror fans, 1955 cosmic creeper The Quatermass Xperiment (aka The Creeping Unknown) is an eerie black-and-white warning against intruding on the outer darkness. Adapted from a 1953 BBC show, nearly a decade before the first human reached space, it was a turning point in sci-fi horror, rejecting the coy tell-don’t-show styles of a Cat People. As fan John Carpenter explains in an included interview, "Val Lewton never showed anything. Quatermass showed it." Carpenter should know: His remake of The Thing shows the clear influence of Quatermassdirector Val Guest's unnerving masterpiece, as does Ridley Scott's Alien, and many classic Doctor Who plots. It's the original body horror, as returning astronaut Victor Carroon (Richard Wordsworth) transforms into a monstrous, flesh-absorbing mutant. Indulging U.S. audiences, Hammer Studios cast American actor Brian Donlevy as the titular Quatermass, the definitive British consulting scientist, but his harried gravitas balances Wordsworth's desiccated despair. For sale: Fixer-upper, perfect for flipper, DIYer, or Cthulhu cultist; needs new plumbing. The Thing at the Doorstep is an unwelcome visitor, but a welcome Lovecraft adaptation.

There's a Lovecraftian vibe to Wordsworth's final deformed mutation, and similarly The Thing at the Doorstep adds to the catalog of low-budget HPL adaptations. Stretching the purple-prosiest of the horror writer's 1933 short story into a full feature, the semi-am-dram production modernizes and adds a greasy, green sheen to the tale of Innsmouth resident Daniel Upton (David Bunce), friend/enabler to Edward Derby (Erick J. Robertson). Derby's besotted with occultist Asenath Waite (Mary Jane Hansen). Her obsessions seem harmless, but the gruesome truth entails mindswap and a typically hideous, Lovecraftian fate. This isn't ghastly abomination-style Lovecraft: This is Lovecraft, master of creeping, queasy metaphysical dread. Unlike the period weirdness of the H.P. Lovecraft Historical Society adaptations like The Call of Cthulhu, there's a suburban nightmarish quality. As scripter, Hansen ably expands the characters’ whisper-thin personal lives through Upton’s psychologist wife (Susan Cicarelli-Caputo). She adds emotional depth, as the couple ponder if Asenath and Edward’s relationship strains are domestic abuse or uncanny horror.

The suburban The House at the End of Time remembers the first rule of property ownership. Whether it's the left, Dead End Street, or Cemetery Lane, never own the last house anywhere. Writer/director Alejandro Hidalgo seals Dulce (veteran Venezualan actress/producer Rudy Rodriguez) in a rambling, crumbling mansion, one filled with ghosts both metaphorical and metaphysical. Three decades earlier, she was locked away for murdering her son and husband. The crime is unseen by the audience, but she blames the unquiet spirits that lurk in the strange catacombs beneath. Returning under house arrest, her fragile mind is near collapse, with only the local priest (Guillermo García) on her side. Dulce’s flashback reminiscences become time-hopping, as she is dragged deeper into murky supernatural horror. Hidalgo understands that Gothic ghost stories work best as family tragedies, with Dulce and her husband (Gonzalo Cubero) are broken down by impending divorce, grief, and loss.

There are no uncanny forces at play in Cam2Cam, just Internet-enhanced unpleasantness. Allie Westbrook (Tammin Sursok, Pretty Little Liars) is backpacking around Thailand when she arrives in a cheap hotel in Bangkok. Why so cheap? Because a few months earlier, a girl was graphically abused and murdered while working as a cam girl. Think there could be some connection between the two? Cam2Cam tries to pull a Psycho-style second-act switcheroo, but director Joel Soisson is no Alfred Hitchcock, Russell Geoffrey Banks (who plays serial killer Mike) is no Anthony Perkins, and Sursok clearly doesn't have Vera Miles chops. Fortunately, there's a mid-second-act twist that adds some extra interest, but there are too many online strippers, salacious hookups, sleazy locals, twentysomething starlets in Daisy Dukes, and stinking red herrings to imply any real depth.

There are oddities, and then there is Gingerclown. Director Balázs Hatvani wrote Thelomeris, the first Hungarian mainstream science-fiction film. There's nothing mainstream about Gingerclown, an oddball homage to Fifties letterman-jacket chillers like I Was a Teenage Werewolf and Monster on Campus, and the kooky horrors that spoof them, such as Killer Klowns From Outer Space. The bullying quarterback (Michael Cannell-Griffiths) dares the resident dweeb (Ashley Lloyd) to go into the spooky abandoned amusement park, in return for a kiss from the head cheerleader (Erin Hayes). Played for over-the-top schlock thrills, it somehow got a combination of B-movie faves (Tim Curry, Brad Dourif, Lance Henriksen) and Hollywood burnouts (Sean Young) to provide voices for the demonic puppets in the funhouse. This is a pizza and a six-pack movie, so don't expect anything daring. But if that VHS copy of Terrorvision just got eaten, this'll be a good stopgap.

Beneath melds "inspired by true events" meme with mine-collapse claustrophobia. Environmental lawyer Samantha Marsh (Kelly Noonan) returns home for her father’s retirement (B-movie regular Jeff Fahey). During one last trip down below, there's a sudden collapse after a weird tunnel opens up. It'll be 72 hours until the rescue team can get to them, but with thinning air, desperation, and odd sounds emanating from all around, madness beckons. It could have rested on its laurels as a simple survival horror, but cinematographer Timothy A. Burton takes a pretty prosaic and predictable tale of ghosts in the shaft (19 miners died in this very tunnel, doncha know?) and adds a sense of stale air and dusty imprisonment: trapping the survivors in survival capsule that soon becomes a tomb, then merging them into the coal seam as the dust and darkness consumes them. 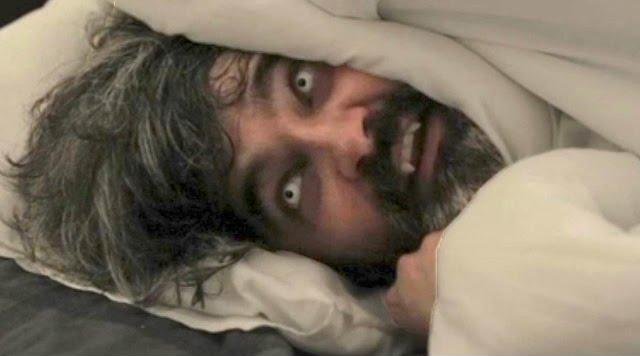 In Summer of Blood, a vampire's greatest fears: sunlight and day jobs.

Summer of Blood is half Kiss of the Vampire, half Portlandia skit, and the perfect antithesis of the Twilight saga. SOB makes being immortal the worst curse possible: an eternity with schmucks. Writer/director/star Onur Tukel (Septien) makes Eric the most annoying man alive, and then just as annoying when he’s undead. What looks like hipsterism is just rampant laziness, and his girlfriend finally tires of his low-grade ridiculousness. Schlub doesn't cover how awful he is, and then he gets bitten by a vampire, and becomes … the world's schlubbiest vampire. He has all the normal vampire skills – hypnosis, sexual prowess, bursting into flames in direct sunlight – but he's still him. Even his equivalent of the Brides of Dracula see through his BS, and call out his vision of vampiric group sex. Sly, subversive, and unafraid to make its leading man unremittingly irksome.

Clive Barker's Lord of Illusions (Scream! Factory), Ragnarok (Magnolia), The House at the End of Time (Dark Sky Films), The Thing at the Doorstep (MVD), Cam2Cam (IFC), Beneath (Lionsgate), Gingerclown (Lionsgate), Summer of Blood (IFC) and The Quatermass Experiment (Kino Lorber) are out on DVD and Blu-ray now.