Gazing Back at Other Worlds Austin Last weekend's Other Worlds Austin has returned to its home planet, but the inaugural year of the city's first dedicated science fiction film festival leaves the winners of its awards, the Cthulhies, behind on Earth.

The big winner in the features category was cause-and-effect crime thriller Time Lapse. Written and directed by Bradley King, it received its Texas premiere as the festival's centerpiece film, and went on to take best feature, best script, best actress for Danielle Panabaker, and best score. Here's the full list of winners: Staring into the abyss of mortality in Capsule

Time Lapse is one of a slate of films that received its local premiere. One of the favorites of festival founder Bears Fonté is Capsule. This cerebral and apocalyptic Dutch drama, which had its U.S. debut in Austin, has an unusual provenance. Director Djie Han Thung was internship director at the Media College Amsterdam, and the film was conceived as the graduation project for the acting class.

The weight of the world rests on the shoulders of Daniel Ichigo (Michael Schnörr), a childhood prodigy turned top NASA researcher. Engineers and mechanics are building pods – the titular capsules – each capable of housing 900 selected survivors. Everyone else dies. There is nothing else to be done: A neighboring star has collapsed, and a wave of gamma radiation is heading towards Earth. It's Ichigo's task to select the lucky few, based on his belief that those best set to be locked away indefinitely with 899 strangers are those with the greatest capacity for love.

This is not awkward schmaltz, or an excuse for apocalyptic FX ridiculousness. Instead, it becomes a multi-layered character piece as a series of characters apply to be one of the 900. But the Ichigo test quickly becomes a stress test for relationships: a couple fractured by her rape; siblings divided as one waits for the other to come out of prison; a stripper recently cured of cancer, who becomes unlikely friends with a funeral cosmetologist. The ensemble cast weaves back and forward through the multi-stranded, nonlinear plot, creating cameo-sized performances that stress the personal over the cosmic.

It's not flawless (this is, after all, a student film). There are dead-end diversions and extreme coincidences, and an ending that may carry the audience toward a hopelessly bleak conclusion. But then again, so did the equally nihilistic Seeking for a Friend for the End of the World. Even in the bleakest interpretation of its open ending, there is still a sense of hope. 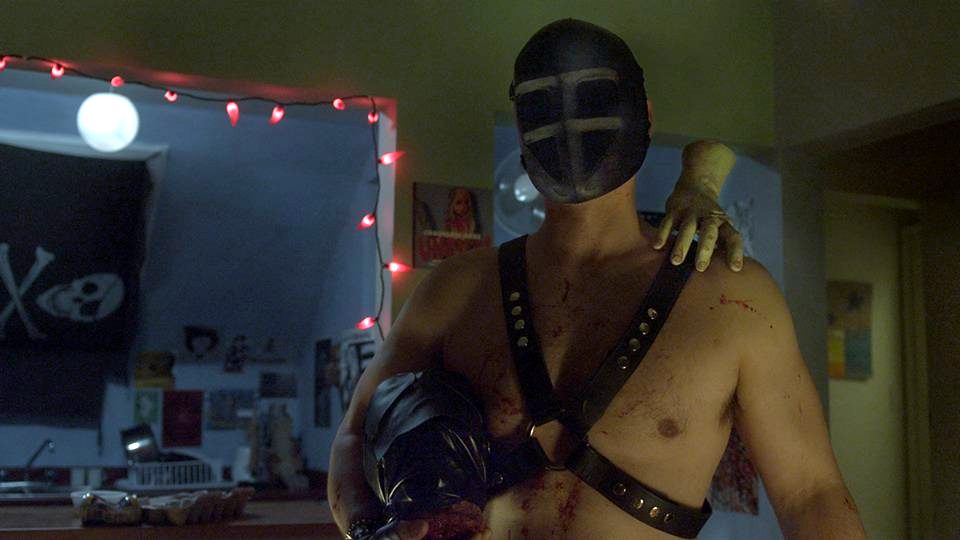 A leather daddy carrying a decapitated gimp head fighting crime with a sentient severed hand? Not the most distatesful thing in Bloody Knuckles

There are many classic tales that have told over and over again in the cinema. Separated lovers. Empires at war over a bauble. The metaphysical angst of an artist denied expression. Severed hands coming back from the grave to seek revenge. Guess which one the Canadian sleazoid comedy Bloody Knuckles does?

Actually, it does the last two. Travis (Adam Boys, Leprechaun: Origins) is an underground comics artist, creating the purposefully offensive Vulgar Invasions. Pitching his work somewhere between Robert Crumb's Weirdo Comix and Tijuana bibles, his sole aim is to upset as many people as possible, while hanging out in record stores and trying to sleep with the journalist (Gabrielle Giraud) who's interviewing him.

Inevitably, his hipster hubris get the better of him, when respected businessman Leonard Fong (Kasey Ryne Mazak) gets a little bit upset about a cartoon strip. Well, fair enough: It does show him as a gangster whose rat poison turned a kid into a Street Trash-esque goo-spewing geyser of blue muck and entrails. Fong takes his revenge and Travis' drawing hand. Only the hand isn't too happy about this, and returns from the grave (well, a vomit-covered drain) and starts to reek its bloody revenge.

Like John Water's if he were rebooting The Hands of Orlac, Bloody Knuckles is woefully, determinedly, consistently, and gleefully offensive. Director Matt O'Mahoney's debut feature received its premiere at a special Friday, late-night screening in memory of Housecore Horror cofounder Corey Mitchell. It could not have been more perfect: gleefully tasteless, as Mitchell enjoyed, and perfect, dumb-as-Hades, midnight fodder. Bloody Knuckles knows exactly what it is: a mix of Charles Band shock, Troma sleaze, with contemporary nods to Jason Eisner's "Treevenge" and the neo-schlock of fellow Canadians Astron 6.

It's also a commentary on the increasingly censorious culture in Canada, with a B-plot referencing Andres Serrano's infamous Piss Christ and the recent beheadings of journalists, and a special thanks to Canadian shock artist Remy Couture, who faced legal harassment over claims he produced snuff photos.

So that's why the political satire is scattered in between decapitated gimps, ridiculously cliched Eighties street punks, and a mopey, despondent Travis getting beaten-up and abused by his severed hand. The instant that leather-clad gay avenger Homo Dynamous turns up, you'll know you're in classic American pizza-and-beer cinema territory. Only the beer will be Molson, and the topping is Canadian bacon.

At the other end of the low-budget creative scale, there's a special kind of home movie. Hugh Hefner did it. Andy Warhol did it. Seth Green's Robot Chicken does it. And John E. Hudgens, director of the indie doc Backyard Blockbusters has definitely done it. Like the man says, "If it exists, somebody's made a fan film of it."

What are fan films? They are what happens when amateurs play with some other creator's toys. The often derided, barely legitimate, quasi-legal art form has produced everything from 127 Hours starring Wile E. Coyote, to a home-concocted origin of Zorro.

This is really about obsession within the film-loving community. Like its subject matter, the documentary is a low-budget, rough-around-the-edges, passion project. However, it's boosted by a succession of heavy hitters from within the fan-film community, plus added context from professionals and critics. Unlike recent fanfic docs like A Brony Tale, Hudgens comes at this as an insider, having mashed up The Phantom Menace and car dealer commercials for "Crazy Watto's". He knows the genre and its history,even unearthing its lost, secret roots, with moments from 1920s Our Gang rip-offs, and one retiree reminiscing happily about starring in a homemade Tarzan film in 1936.

Inevitably, the bulk of the home-video era is a tale of Star Wars obsessives, as TheForce.net gets credit for being the first major video platform in existence before YouTube totally democratized distribution and Kevin Rubio's Troops (part-Star Wars, part COPS) broke the dial-up Internet. That makes it a tale of technology and, increasingly, intellectual-property law. There's a difficult line between rip-offs, unlicensed sequels, spoofs, and fan films. Thank the Force for fair-use and satire laws. However, George Lucas comes across as way cooler than many critics would claim.

Backyard Blockbusters has been doing the genre festival circuit for a few years in incomplete form. While this new and final cut is scarcely finished, and already a blur of interviews, there's still plenty of material for Hudgens to come back to, if he ever desires (case in point, no mention of the ever-expanding catalog of porn spoofs). But he puts a fascinating new spin on what Hollywood does every time there's a remake or new adaptation. As one amateur filmmaker puts it, "Lord of the Rings is a fan film. Peter Jackson can't deny it. He just got the rights."

A quick note: Michael Dorkman, star of the "Ryan vs. Dorkman" shorts, who appears in Backyard Blockbusters, was recently hit by a car and is still in serious condition. You can contribute to his medical funds via GoFundMe.com.