Werewolves, contact lenses, and the Hap and Leonard series 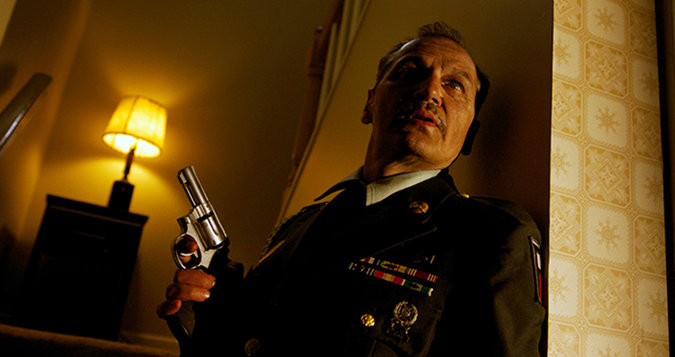 Ambrose, the surly, blind, widower/werewolf killer of Late Phases, doesn't get along with people too well. That's maybe why Nick Damici liked playing him. "He's kinda grumpy," said Damici, "but ironically I agree with him a lot. I love people individually, but I'm not a fan of humanity."

As an actor, writer, and producer of films like post-apocalyptic vampire nightmare Stake Land, cannibal family drama We Are What We Are, and the recent adaptation of Joe Lansdale's Cold in July, Damici and his long-time directing partner Jim Mickle have become mainstays of alternative horror. In his first teaming with director Adrián García Bogliano (Cold Sweat, Here Comes the Devil), Late Phases adds a new twist to the lycanthropic trope. Instead of a vicious furry killer romping across mist-shrouded moors, this is a vicious furry killer limping around a retirement community, where no one seems too bothered when residents disappear. That is, until Ambrose, a grizzled Vietnam vet, and his guide dog Shadow move in.

Damici explained this film's anti-hero: "He's based in this reality of truth. His meanness wasn't about making him feel better. It was just about, I don't tolerate bullshit. It's very much like Clint Eastwood in Gran Torino, who you could dislike if you wanted to. But if you look at him, you like the guy, even if he is a grumpy old bastard."

Austin Chronicle: With films like Stake Land, you've gained the reputation as the guy who takes on hard-to-pitch horrors. Werewolves in a retirement community with a blind action hero continues that trend.

Nick Damici: I'm very attracted to stuff that's outside of the box – if it's outside that box in a good way, not just for the sake of it. This was an opportunity to do something that's familiar, werewolf movies are familiar, but to do it with in this old peoples' with an elderly blind guy as the protagonist, I thought was interesting. Normally it's some coed, or a bunch of young kids on a camping trip in a cabin. I thought, wow, that's interesting, at least someone's paying attention to the old folks.

AC: You're a good decade younger than Ambrose. Was there ever a point when Adrian went, no, we're looking for someone older?

ND: He was. He was laden with me. Greg Newman, who produced Stakeland also, he hired me, so when Adrian came into the project, I was attached already. He didn't really have a choice, so I felt kind of bad for him. But he was very gracious about it, and we talked about how I was going to play older. We brought in the special effects guy, Brian Spears, who's a terrific, terrific makeup guy, and he got a big kick out of doing it because it was straight makeup, just doing age. On the first day, it took about an hour and a half, and I was the first one there. He did it every day and got it down to around 45 minutes.

AC: And you're wearing those contact lenses all the time. How much of a pain were they, and dd they help with the performance?

ND: It's not something I'd jump back into doing. I tried, I put them in a few times on my own, but they were just takin me so long and I irritated my eyes. I'm just not good with that. I wear reading glasses, but I can't stand for anything to touch me eyes, so I just had to sit back and let Stuart do them. It was torture every time, and then getting them out was no fun either.

AC: How much could you actually see through them?

ND: They were opaque, so in medium light I was OK. I could see people. I couldn't read or anything. But the minute it got a little dusky or darkish, I started to really lose things. And then if they put bright lights on me, which happens all the time when you're making a movie, then I would basically be blind. The hardest part was doing the action that way, because, number one, I had the lenses in, and number two, I'm not allowed to focus my eyes, so I had this peripheral thing, so I couldn't look at what I was doing. The poor kid playing the werewolf, the stunt guy, he was in the mask, he couldn't see very well either. So two blind people fighting each other, it was pretty funny.

AC: No way that can go wrong. No prop shovels across the face?

ND: We did OK. A few knees in the groin on accident, stuff like that, but nothing too bad.

AC: You're also appearing opposite a couple of big name in indie horror: Larry Fessenden (Beneath, Habit) and Tom Noonan (Manunter, House of the Devil).

ND: I love when you get drunk with Larry and he turns into a pirate. I met Tom, maybe 10, 12 years ago. I was good friends with a guy named Victor Argo, another actor, so I kind of knew Tom through him. Then I met him again - Jim's sister knew him some how, so we went to a party at his house. He lives in my neighborhood, then I'd run into him at the bank, I'd say, hey how you doing, Tom, and the guy would never remember me. He was very polite, but he didn't know who I was. So when we did teh movie, I was like, he's not going to remember me again. And of course, he basically didn't remember me until I started naming names and he went, yeah yeah yeah, I saw you with Jim Mickle.

I always thought he was very intimidating. He's six foot four or whatever it is, and he's got this giant head, and he doesn't talk. He just stares at you and he's quiet. But then I realized he's just that kind of guy. He's kind of reserved, but once he opens up he loves to tell bad jokes. My dad was a bar tender, so he knew a million bad jokes, so me and Tom would tell bad jokes in between takes.

AC: And now you're working on adapting Joe Lansdale's Hap and Leonard books for Starz. How's that going?

ND: It's green lit, we're working now, and it's a good thing. Joe's so prolific, and a wonderful writer and so accomplished in so many other ways, and just a down-to-earth, no-bullshit guy, that when it came to Cold in July, he realized that Mickle and I were huge fans of his. We weren't some big Hollywood producers coming and saying, hey, we want to turn this into a movie and being able to take it and do what they want with it. We were really going to try to do the best to do his book the best we could. He trusted us and we built up the relationship. Then the Hap and Leonard thing came up and said, well, if anyone can do it, you guys can do it.

AC: There's a whole shelf's worth of Hap and Leonard books. Are you hoping to adapt them all?

ND: All depending on the success of the series. At this point, we're starting at the beginning and we're going to try to follow the series. Whether we skip a book here and jump to another book, I don't know. We don't make all the decision. But at this point, that's Jim and I's intent, to try to mount the series in book form and take it from there.