DVDanger: How to Date in a Sci-Fi Universe

Premature and The One I Love probe romance 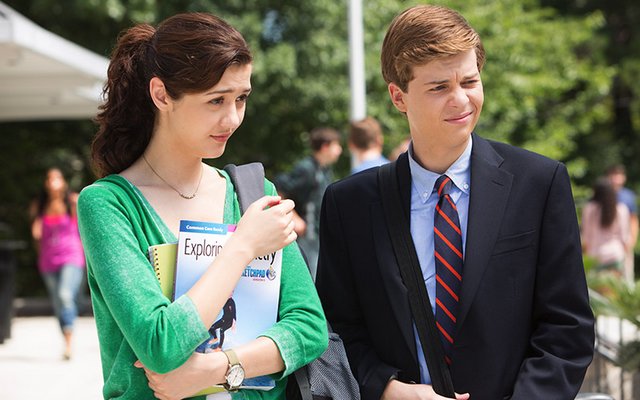 It's been said that there's nothing new in film, we just keep doing the same things over and over again: At best, we're creating hybrids of old ideas. Premature (IFC) clearly aims for Groundhog Day meets Porky's, and hits the target clean. Or not so clean. Its big special effect is lotion.

The Groundhog Day component is pretty clear. Rob (John Karna) gets stuck repeating the same day over and over again – except that he's not a TV reporter hanging out with a furry weather prognosticator. He's a high school senior whose day is supposed to center on applying for college, and watching the spelling bee with his best friend Gabrielle (Katie Findlay, The Killing). However, he gets distracted by the hottest girl on campus, Angela Yearwood (Texan Carlson Young from the upcoming Scream TV adaptation). Things get gropey, he peaks early, then wakes up in bed the morning before in a pool of his own mess. And this happens again, and again, and again.

After a string of hit (Kid Cannabis) and miss (Project X) sex-and-weed-centric quasi-teen comedies, Premature succeeds by shamelessly paying homage to the high-water mark of the genre – the mid-Eighties. With clear references and sideways winks to some of the best of the era, Premature manages an update that works. That includes Alan Tudyk (Serenity, Tucker and Dale vs Evil) in a part that, 30 years ago, would have been written for Jeffrey Jones, and a musical sting that preludes a lengthy Ferris Bueller's Day Off sequence. This time around, Findlay stands in exquisitely for Mia Sara, and Craig Roberts (Submarine) takes the best-friend role that always used to go to Alan Ruck. Except, rather than nebbishy and nervous best friend Cameron, Stanley is a happy degenerate whose moral compass points less true North, and more at any passing female.

The whole endeavor is unapologetically and gloriously crude – after all, every day starts with Rob in a wet spot, and this is the film that coins the term jizzekinesis. But like the best sex comedies, it's actually very sweet. It is one of the most manipulative of all genres, and you'll know from reel one that the end will be all Bill Murray and Andie McDowell staying up till dawn, but with Rob and Gaby finally changing their Facebook relationship status. That doesn't matter, since they have an easy, awkward charm that flows through every scene. Weirdly, it's almost completely nudity free. It even dips into the classic skin location, the girls' locker room, and avoids even a hint of nekkidness. In fact, the only exposed skin is on Karna's buttocks as he innovatively escapes a rampaging mob of high school bullies.

If you can't be with the one you love: Mark Duplass and Elizabeth Moss ask who they're really married to in sci-fi tinged relationship drama The One I Love.

There's a much more mature take on the perils of romance in a sci-fi setting with another release this week. You should read Marjorie Baumgarten's review of The One I Love, the feature debut from director Charlie (son of Malcolm) McDowell, which puts Sophie (Elizabeth Moss, Mad Men) and Ethan (UT grad Mark Duplass, Cyrus, Jeff, Who Lives at Home) as a couple very much on the rocks. A kin to this week's genre-defying snowbound family drama Force Majeure, there's a neat little featurette that aspiring SF directors might want to check out, if purely to see how a time-worn SF trick can be given new life with contemporary technology. And no, it's not high-tech mayonnaise.

Premature (IFC) and The One I Love (Radius-TWC) are available on DVD and Blu-ray now. For an interview with Mark Duplass and Charlie McDowell about The One I Love, read Two Guys, a Girl, and a Puzzle Piece, Aug. 29.