Praying for The Overnighters

Director Jesse Moss stands and rests with the fracking migrants 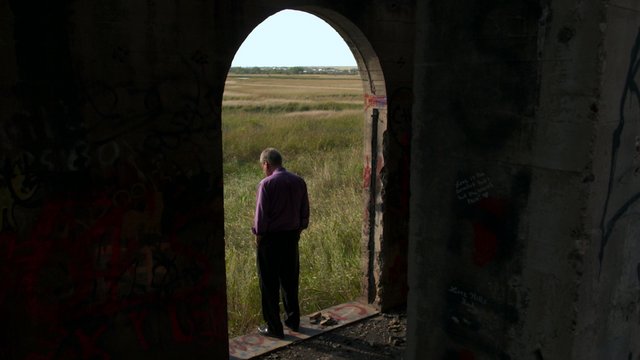 "This is a broken man helping other broken men."
– documentarian Jesse Moss on the tragedy of Pastor Jay Reinke in The Overnighters

If The Overnighters is a modern true-life version of The Grapes of Wrath, Pastor Jay Reinke isn't its Tom Joad. He's more like Jim Casey, Tom's clergyman friend who tries to organize some defense for the poor and oppressed, and pays the consequences.

Jesse Moss' new documentary, released by Drafthouse Films, centers on Reinke's Concordia Lutheran Church. It's the last refuge and resort for migrants to Williston, North Dakota, and the situation there sums up the desperate contradictions of the modern American dream. It was a small town that suddenly became a boom town, with tens of thousands of workers traveling in search of jobs. The new oil boom allows them to escape jobless futures in Iowa and Wisconsin, gives them a little glimpse of hope for building a better life.

Yet even with a good-paying job, it's a tough life: They're surrounded by toxic chemicals, with nowhere to stay, and the locals don't want them. Reinke's principles tell him he has to help them, even while it drives some of his parishioners crazy. Moss said, "Jay had a calling to help these people. … This is a broken man helping other broken men."

Moss (co-director of SXSW 2008 grand jury award winner Full Battle Rattle) didn't expect his lens to fall so heavily on Reinke. "I had an image of what a film should be," he said. "It should be roughnecks on a drilling rig. But I went to Jay's church, and it was a very powerful experience."

Moss, who was in town last night for a Q&A at the Alamo Drafthouse South Lamar, explains how he spent 18 months traveling to and fro from his native New York to North Dakota, sleeping rough in the church. "They put me in the snorers' room when I first got there. It's like the quarantine zone, guys who snore like you wouldn't believe. That was horrible. Then I moved to the hallway, then to a couch."

Austin Chronicle: How did you find yourself in North Dakota?

Jesse Moss: It does feel like the back of beyond. Just going up there was like going to the far north. Really, the invitation was that I spoke to Jay on the phone. Williston had developed this sort of Deadwood reputation that was intriguing to me. What does a 21st century boom town look like and feel like, not to mention the thousands of people flooding in there?

I didn't know what the entry point was for this film, not wanting to take a macro view but curious about life on the ground. I read this clergy column that Jay wrote for the local paper, and this was shortly after this woman had been killed by two guys who came from out of town. There was a lot of fear in the community, and Jay called on them to welcome these people, not to fear them. I knew that was an unusual sentiment, so that was my motive to call him up. He was very open on the phone, and that was when he told me there were people sleeping in his church. I knew Williston had a housing problem so, with Jay's invitation, I went up.

AC: How quickly did it become apparent that Jay was going to be your subject, and that you didn't need to look for someone else?

JM: I kept looking for a long time. More like to hedge my bets, more as I felt that's where the heart of the story was, it was the whole 'who's going to care' situation. So I filmed for a long time at another location, a camp ground where people would stay. I met people there and got to know them, and it took almost a year for their stories to fall away, as Jay's story grew, and I got more involved in the program and his life.

I think the reason I kept coming back to Jay was that I found him infinitely fascinating, with his escalating dramas. It was clear that he had crossed this line in his life, that he couldn't come from. He had fully embraced these people, his congregation had turned on him, and it didn't matter to him. This was his calling. But I could see on the far horizon that this would not end well. He said that to me. He said, Jesse, I could lose my job, I could get fired, the program could be shut down, I don't know. So I knew that, somewhere in the distance, there was an end to the narrative.

AC: There's a moment when one community member makes it pretty clear how she feels, when she points a rifle at you and Jay. How did the residents feel about you?

JM: The community, I don't think, was particularly attentive to me. I'm just one person with a camera. I'm not Connie Chung. I wasn't running around trying to pigeonhole people, I was just focused on Jay. Occasionally I would come up against some resistance. The congregation was somewhat wary – not happy about the program, not particularly happy with their pastor, not clear what my motives were. Jay felt, and I like to think, that the debate they were having in the congregation was really important. What's the purpose of the congregation? Do they serve each other, or do they serve these disenfranchised people who need help? How do they express their faith, and what does it mean to them to love their neighbor?

The gun, that's in Wheelock. If you find yourself in North Dakota, I don't recommend you go to Wheelock. It's a strange kind of ghost town that lurched back to life. It's this strange part of the film where I went with Jay to get this trailer, and this woman comes out, and holy shit, she's got a gun. She's threatening to use it, and North Dakota law's probably on her side.

You start to run this algorithm in your head. Is she crazy? Jay's a pastor so he's probably got divine protection, so does it extend to me? But I was thinking, I was 15 months into production. In for a penny, in for a pound. If Jay is going to get shot dead, doing something he shouldn't be doing, then I'm going to be rolling. So at some point, you're running this calculation, but then at some point, it breaks down, and it's purely emotion. It's instinct. You just keep rolling.

The Overnighters is in cinemas and on VOD now. For a review and screening times, visit our listings page.