Docs cheer a legendary dancehall and a favorite hometown weirdo

Few American cities know how to self-mythologize like Austin.

We’re a town of newcomers – more of us every day, washing up from colder climates, conservative hinterlands, south of the border, or expensive coastal cities that have priced us out. We arrive with a few vague images in our minds of what Austin represents, Lucinda Williams or Daniel Johnston or Robert Rodriguez or Barton Springs. Then, we dive in. We learn the legends, the special places. We collect opinions from everyone we meet on when Austin stopped being cool, and how it’s our fault for moving here. (One disgruntled cab driver recently told me it’s all been downhill since 1995.) As the city continues to change, now under our feet, we become true Austinites, guardians of the local mythology, imparting it to the next round of newcomers who have arrived to screw up everything we ever loved about the place.

The Broken Spoke is, if not the Mecca of Austin-worship, at least one of our holiest sites. One commentator in photographer and frequent honky tonk chronicler Henry Horenstein’s new short documentary “Spoke” calls it a “sacred bandstand.” The film dutifully traces the history of the institution, from the 1960s, when Bob Wills and Ernest Tubb got the party started, on to its present-day reality, sandwiched between two giant condo buildings on South Lamar. It was not always thus. When the Broken Spoke opened it was a literal roadhouse, “a place on the outskirts of town, out on the highway, where men and women could go and do the things men and women do outside of town,” says musician Cornell Hurd.

Owner James Smith has measured out a lifetime of rowdy, enchanting evenings slinging Lone Star and Pearl along Loop 343. In the early days, Smith says, “It was a sign of somebody who had a little money when they said, ‘I want a Budweiser,’” because Bud was more expensive than those Texas staples. Times have changed, and there are less fist fights these days, but the Spoke is still going strong. 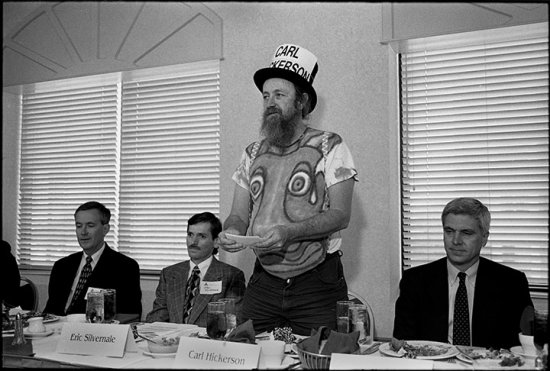 Crazy Carl and His Man-Boobs

“Spoke” is presented by Austin Film Festival as part of a double bill tribute to local institutions. The b-side, so to speak, is Crazy Carl and His Man-Boobs, a lighthearted portrait of Austin icon Crazy Carl Hickerson (yes, that’s his legal name). You might recognize him as the guy who hangs out outside Esther’s Follies and flashes the crowd glimpses of his unusually juicy man-melons. According to director Mike Woolf, Crazy Carl’s story is also Austin’s story. In broad outlines, it’s the tale of a UT swim team letterman who caught the spirit of the Sixties and became a longhair flower spinner, marijuana activist, and outsider mayoral candidate on a “No growth and nude swimming” platform.

Age has slowed him down some, but Crazy Carl remains a charming on-camera personality, in particular because, underneath the outrageous behavior, he seems like a genuinely sweet person. The film’s most interesting Austin history lesson involves Crazy Carl’s role in helping 1970s Eastside Chicano activists end noisy speedboat races in the Fiesta Gardens area. The tale involves – you guessed it – nude swimming, in this case through the then-heavily polluted waters of Town Lake to remove racing lights.

Like the Broken Spoke, Carl has become an institution in his later, more dilapidated years. The two films are testaments to the old Austins that persevere within our modern-day boomtown metropolis. Both are warm-hearted documents of a certain local brand of nostalgia, circa 2014. Austin, don’t you ever change.

“Spoke” and Crazy Carl and His Man-Boobs screen again on Thursday, Oct. 30, 7pm at the Alamo Drafthouse Village.