Home with the family, both living and passed 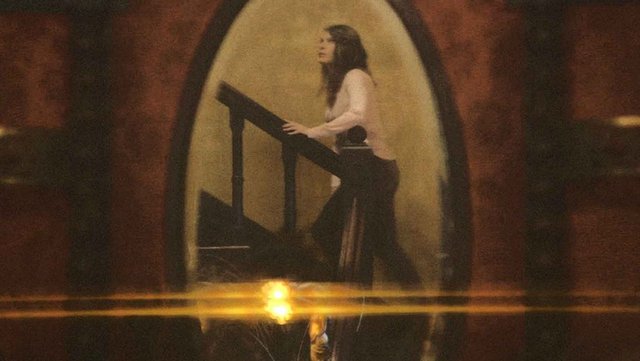 Senility is a slow curse, the collapse of the mind before death. Yet if there is a life after death, would there be a worse curse than retaining that mental decline in the beyond?

In the Texas supernatural drama The Sideways Light, the threat of life beyond the veil seems far less terrifying than dealing with the strains of family life. Lindsay Burdge (A Teacher) is Lily, a twentysomething who has become the guardian and watchdog over her senile mother Ruth (Annalee Jefferies, Ain't Them Bodies Saints, Hellion).

Not that Ruth is making her job easy. Perpetually following Lily like a too-close shadow, never sleeping, wandering about, breaking things, and refusing to leave the house. "It's too bright out there," she complains. "Light coming from all sides and nothing to hold on to." But is this all just the onset of dementia? Ruth keeps talking as if her own mother, after whom Lily is named, were still in the house. It doesn't help that the local kids say that theirs is the neighborhood haunted house.

Shot with the same drained-out palette as another recent haunted house-movie, the black comedy Housebound, writer/director Jennifer Harlow tries for a much more melancholic tone. The rambling, Victorian-tinged house seems purpose-built for spectral tenants, but then it also seems like a shady, crumbling prison. Lily's struggle with her brother over whether Ruth belongs in a residential facility is more a battle for her own future, as there's a hint that her condition may be hereditary.

Harlow's script is littered with little suggestions that Ruth is not simply declining into incoherence. What she sees may or may not be there, and Lily is left to ponder whether Ruth's fading mind is a symptom of her second sight, or the cause of her delusions.

Harlow is trying for new territory here, a softening of the general tone of doom that covers such home hauntings. This is a family in anguish, and that comes before any suggestion of the otherworldly. But not all her decisions work. Daniel Hart's insistent score depends too heavily on vibrato strings that seem ill-fitted to either the family drama or the supernatural components. Similarly, Jay Keitel's restrained cinematography works better when giving a dreamlike sheen to more conventional dramas like Sun Don't Shine than directly evoking the eerie.

One cannot fault Harlow for her ambition, and she undoubtedly brings out the best in her cast, and especially the fractured mother/daughter relationship. It's Jefferies that provides her with both an anchor in reality and a bridge into other worlds. Cinematic depictions of senility often come across as demeaning, comedic shtick disguised as character development. Instead, Jefferies' battles with the invisible, whether real or imagined, are truly heartrending.