Austin Film Festival: Popovich and the Voice of the Fabled American West

Cats and dogs living together

Don’t let the fact that this unique little gem of a film has been slotted into the dreaded “Family Film” category. Popovich and the Voice of the Fabled American West is crammed to bursting with witty gags, slapstick daredeviltry, and heart to spare. 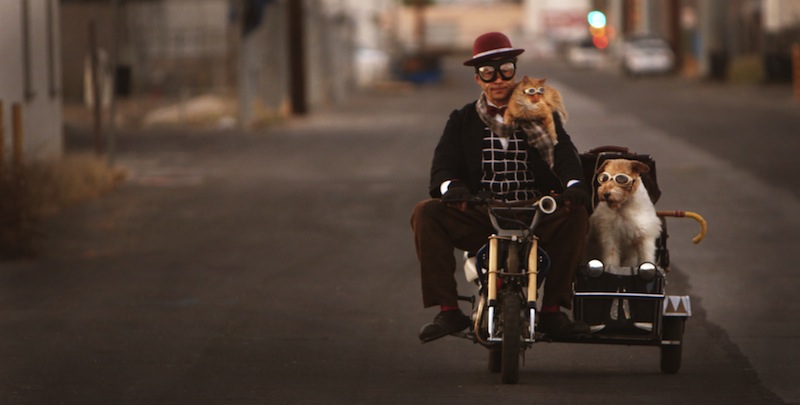 Just as important, it’s a quirky, old-school tale of dreamers and doers, long odds and sure bets, and madcap tomfoolery that recalls comedic forebears Buster Keaton and Charles Chaplin at their dynamic best.

The titular Popovich is, in real life, Gregory Popovich of the Popovich Comedy Pet Theater, a touring performance group employing trained animals and based out of Las Vegas. That’s the fact behind this kid-friendly cinematic fiction, which casts Popovich as a down-and-out version of himself. Working odd jobs and busking on the seedier streets of Vegas, Popovich runs afoul of his trailer-park landlord and the local animal ordinances, a situation that drives the engagingly simple plot and results Popovich’s unlikely team-up with a bevy of other Vegas street performers in equally dire straits.

Chief among them are the Space Mime (Mike Thompson) and a pair of sword-wielding Samurai Elvises (G. Scott Thompson and Bob Shaughnessy), a trio that might as well have wandered in from Lance Mungia’s 1998 cult action-comedy Six-String Samurai. (For sure, the two films share a similar anything-goes vibe; Samurai’s ghost of Elvis is here replaced by the “Voice of the Fabled American West” incarnated as a mysterious John Wayne impersonator replete with six-shooters and matching stallion.)

The real stars of the show are, no surprise, the acrobatic Popovich and his many trained animals, who are considerably more hilarious and, yep, touching when going through their paces than any film review can make them seem. I shudder to think what the Animal Liberation Front will have to say about Popovich’s four-legged buddies, but the film’s genuine charm and good will should outweigh any concerns ani-moms and PETA-pops about Gregory Popovich’s joyful menagerie. Co-directors Jerry and Mike Thompson have created something downright magical here, and while there may be a couple of moments that might, at best, be called “hokey,” the film as a whole is a triumph of good-natured can-doism, with an emphasis on treating all creatures, great and small, with love, compassion, and the occasional pratfall.

Popovich and the Voice of the Fabled American West screens Monday, Oct. 27, 7pm, at the Galaxy Highland.