Dan Harmon, creator of TV’s Community and host of the weekly podcast Harmontown, was in Austin Friday night for an Austin Film Society screening of Wayne White’s new documentary, also titled Harmontown. The film follows Harmon as he takes the podcast tapings on a tour across the country following his very public firing from Community.

Dan Harmon serves as “mayor” of Harmontown, the de facto leader of a rabid fan base consisting of a pop-culture obsessed band of outsiders. They care passionately about his projects, but more importantly about the camaraderie they find among other “nerds full of love” that Harmon brings together.

Following the screening at the Marchesa Theater, Harmon hosted a new podcast taping for Austin’s eager congregation of “Harminians.” The Harmontown podcasts are free-flowing, unscripted, comedic stage shows about nothing and everything. Audience participation is encouraged and its members frequently join the cast of regulars on stage. The regulars include co-host Jeff B. Davis, Harmon’s girlfriend Erin McGathy, and Spencer Crittenden. Crittenden’s participation began as an audience member who was invited on stage to serve as Dungeon Master for a game of Dungeons & Dragons. Both he and D&D are now staples of the show, earning Crittenden a cult following of his own.

Though co-host Jeff B. Davis was not in attendance, the role of “comptroller” was left in the capable hands of special guest LeVar Burton of Reading Rainbow and Star Trek fame. Burton, who was in town promoting his new kid’s book The Rhino Who Swallowed a Storm, received a standing ovation from the enthusiastic crowd as he made his way to the stage.

Though, Burton and Harmon had collaborated on a couple of episodes of Community, Harmon was visibly nervous to be sharing the stage with one of his childhood idols. After awkwardly reading some of Burton’s Wikipedia page entries, the two found some common ground discussing their literary influences.

Shortly afterward, Harmon, always a fan of potent potables, cracked open a bottle of vodka. Burton inquired about the drink before deciding to join in. “Pheew,” Harmon chimed in. “That could’ve gone one of two ways. I thought this might have been a fucking intervention.”

After some political discussions that seemed a bit out of place, the rest of the cast came on stage and the conversations began to flow well. There was music, laughs, great audience participation, and of course some D&D.

Here, then, are the highlights:

The 10 Most Memorable Moments from the Austin Harmontown Taping Based on an Arbitrary Harmon-Universe Rating System:

10) Harmon and Burton discussing the philosophical influences of Nietzsche (“Nitch” to the former, “Freddy” to the latter) and Lao Tzu.
Harmonverse Rating: The Dualidean of Man

9) Erin McGathy’s endless wit and charm. It seems as though Dan has found the perfect partner.
Harmonverse Rating: Heat Vision

8) Harmon expressing his disdain for the Chaka Kahn version of “Butterfly in the Sky.”
Harmonverse Rating: The Gas Leak Year

5) The chemistry that Spencer Crittenden and LeVar Burton shared during their game of Dungeons & Dragons, leaving Harmon to sit quietly, mouth agape until finally exclaiming, “This is the greatest day of my life!”
Harmonverse Rating: Troy and Abed in the Morning!

4) Harmon and McGathy announcing their engagement and Burton agreeing to do a reading at their wedding.
Harmonverse Rating: Pop! Pop!

2) Burton choosing the name “Kunta Harmon” regardless of sex.
Harmonverse Rating: Annie’s boobs (not the monkey)

The Harmontown documentary opened Friday at the Alamo Drafthouse Slaughter. The Harmontown podcast can be found on iTunes or at harmontown.com.

Trading One 'Community' for Another
Dan Harmon is talking to you 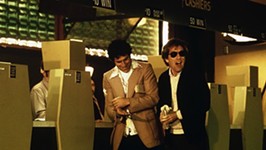 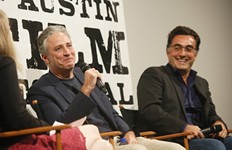