Sad news announcing the death last night in Dallas of actor, director, producer, and screenwriter L.M. Kit Carson has arrived. Carson possessed a great cinematic spirit and he may well be the best – or at least the most influential – modern filmmaker to have come out of Texas.

The 73-year-old Carson displayed his ingenuity with his first film David Holzman’s Diary, the groundbreaking mockumentary from 1967, which he starred in and co-wrote with director Jim McBride. In later years, he re-teamed with McBride to write the American remake of Breathless, which was only appropriate since he had also interviewed and played host and tour guide to Jean-Luc Godard during the Frenchman's American tour in the late Sixties. Carson also co-wrote the adaptation of Sam Shepard’s play Paris, Texas, for Wim Wenders, and the film also features his young son, Hunter Carson, whose mother is Carson’s first wife Karen Black. Carson also wrote and produced The Texas Chainsaw Massacre 2. As an actor, he was one of the stars of Sidney Lumet’s Running on Empty, about the lives of aging Seventies political fugitives. In recent years, as a longtime friend of the Wilson family, Carson helped Luke and Owen Wilson turn their short film into the feature Bottle Rocket. He was also a frequent guest at SXSW and the Texas Film Awards. Carson’s cinematic zeal and maverick spirit will be missed as we extend heartfelt condolences to his son Hunter and wife Cynthia Hargrave. 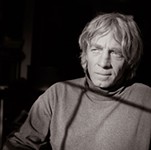