Life isn't all one big pool party, and neither is the afterlife. Zach (Dane DeHaan) contends with Life After Beth, starring Aubrey Plaza.

I'll concede, I've never been a big Aubrey Plaza fan. Like Kat Denning, there's always a whiff of performance about her work, like a vaudeville comic who think's she's above the pratfalls she's delivering and isn't afraid to let the audience know it. Life After Beth (A24/Lionsgate) definitely moves my opinion on her.

As the titular Beth, she's first seen walking happily through the California hills. Smash cut to her boyfriend Zach (Dane DeHaan) at her wake. That happy walk didn't end so well, after she was bitten by a snake and died. Now Zach goes through the grieving process, bonding with her shell-shocked parents (John C. Reilly and Molly Shannon) and trying to get on with his life. Which is harder than it sounds, because Beth doesn't want to stay dead. In fact, she never knew she was dead, and wonders why everyone is giving her funny looks, and why her parents don't want her to leave the house.

DaHaan, last seen as Harry Obsorn in The Amazing Spider-Man 2, returns to the thoughtful, revisionist genre work of his breakout role in don't-call-it-a-superhero-movie Chronicle. As Zach, he's the only person near Beth to dare use the z-word, and politely asks if she's going to eat him. Beth's coquettish, not-in-front-of-my-parents response is charming and romantic, because she doesn't get what's going on. And that's the emotional heart of Live After Beth, as Zach gets used to her being back, and works around her growing idiosyncrasies, including kicking over small buildings and a new appreciation for smooth jazz.

That's where Plaza wins me over. Beth is an erratic character, sweet and funny one minute, violent and raving the next. But she doesn't simply flip characteristics. This is about mental collapse, reminiscent of the sadly under-seen Harold's Going Stiff. But while the British lo-fi drama is a Ken Loachesque, vérité-style mockumentary, Beth has an almost dreamlike quality, underpinned by surrealist undertones. Moreover, while Harold was suffering a form of early onset Alzheimer's, Beth's decline – or rather, whiplash switches – could be straight from an afterschool special on bipolar disorders. Just with added flesh-eating.

Writer/director Jeff Baena hasn't had a credit since 2004's divisive I Heart Huckabees (which he co-wrote), but he's definitely retained his postmodern screwball sensibilities. Substituting that film's A-list cast with instantly recognizable sitcom stars (not just Plaza, but her precursors and contemporaries, including Cheryl Hines, Paul Reiser, an excised cameo from Alia Shawkat, and sitcom king Garry Marshall himself), he nods to the form's relationship comedy strengths. He even plays with the zombie tropes elegantly, with the inevitable slow-moving armageddon offset by dinner party politeness.

It makes sense that Reilly, increasingly tempted into Tim and Eric territory, would take on the part of Beth's father, and his attempts to bond with Zach in their shared male mourning. True, that doesn't leave a lot for Shannon to do as Beth's mom, and that's a shame. Yet Baena has gone for the most delicate and efficient cut possible, in the process completely excising a subplot about Zach's band (Thomas McDonell and Shawkat only make it as far as the outtakes here). He never forgets that, while there are some deliciously oddball moments, like Beth going for a walk with a stove strapped to her back, it's still a sad and doomed love story. 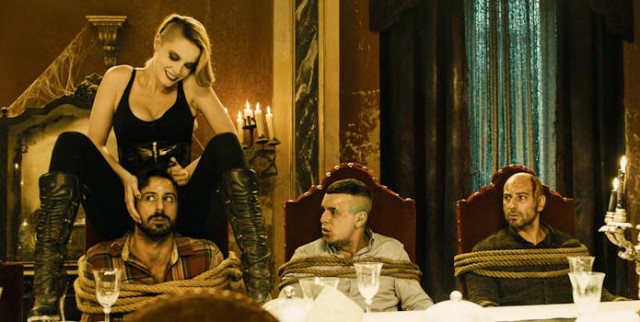 Don't look for any such subtlety in Spanish horror-comedy Witching and Bitching (IFC Midnight). Released in Spain as Las Brujas de Zugarramurdi aka The Witches of Zugarramurdi, it may need a brief explanation. Zugarramurdi is a real town on the Spanish-French border, and is basically the Iberian Salem. In 1611, junior inquisitor Alonso Salazar Frias incited a massive Satanic panic, extracting confessions of witchcraft from around 2,000 locals in the surrounding Basque region. The confessions were later recanted, but to this day there's a massive celebration of the summer solstice in the appropriately-named witches' cave, just outside Zugarramurdi.

In Witching and Bitching, director Álex de la Iglesia doesn't explain any of that, because he really doesn't have to. The Spanish audience will know, and the American audience doesn't need to, because it's just a rollicking ride. Anyone with a vague clue about witchcraft lore will automatically recognize the opening convocation of the virgin (Carolina Bang), the mother (Carmen Maura), and the crone (Terele Pavez, who picked up a Goya for her deliciously over-the-top, senile Babba Yaga shtick here). The three meet to foresee the future, as they search for a mysterious chosen child. In this case, he's in the care of a handful of terminally inept jewelry store robbers.

This is where full-blown de la Iglesia kicks in, with an impishly ridiculous action scene as the robbers try a heist while dressed as a silver body paint Jesus, a toy soldier, and Spongebob Squarepants. The sequence has shades of the more ridiculous parts of his last feature, 2011's The Last Circus, but he quickly abandons any political subtext in favor of a broader comedy about the battle of the sexes.

The robbers are all cartoon pastiches of men, led by terrible, neglectful parent Jose (Hugo Silva). While he clearly loves his son, taking him on an armed robbery doesn't make him PTA material. Pursued by the inept police and his furious ex-wife Sylvia (Macarena Gómez, probably still best known to horror audiences as the siren seductress of 2001's Dagon), he flees to France in a stolen taxi, and decides to stop in Zugarramurdi... presumably because Haddonfield, Camp Crystal Lake, and Elm Street were a bit out of the way. Who is there to greet them but this nice family of a grandmother, mother and daughter? No way that can wrong.

Like all the men here, Jose is a bumbling manchild, constantly bickering with fellow robber Antonio (Mario Casas) and engaging in prime slapstick as the pair drool over leather-clad Eva (Bang). Thinking strictly below the belt, it's left to Jaime Ordóñez as the ill-fated taxi driver to be the first to realize that human foot isn't a regular soup ingredient.

That said, the women aren't much better – mean-spirited scolds all eager to take a literal bite out of the men in their lives. Bang especially relishes the high camp comedy of the affair (especially after veering so close to tragic heroine in The Last Circus), but it's Pavez who sets the comic tone the best. As the iron-toothed grandma, she makes clear nods to Marie Blake's delightfully wicked turn as the original Grandmamma Addams.

Amid the ridiculous chase scenes, broad comedy, high silliness, and (occasionally uninspiring) CGI monsters, de la Iglesia is an equal opportunity offender. Giddily engaging in stereotypes and cliches, equally eager to subvert them, he twirls towards a surprisingly cheerful happy ending, one predicated on a simple idea: Everyone's quite awful, so maybe we should be forgiving of each other's sins.

And full points to Enrique Villén for the best cross-eyed henchman since Marty Feldman's Igor.