Between the celebrity photo ops, the cast reunions, and artists taking commissions, there were some serious points being debated at Wizard World Austin Comic Con.

Post-gamergate, and the public harassing and persecution of feminist game critics, fandom has been less going through some soul searching, and more drawing its battle lines. In many ways, this weekend's convention highlighted the diversity and supportiveness of the scene. There was a panel dedicated to cosplayers with disabilities (personified by the modified wheelchair/Davros seat that became one of the weekend's hot photo ops on the trade show floor). Crossplay (where either cosplayers dress in drag or as a gender-swapped version of a character) has become increasingly common, with female Captain Americas and Legend of Zelda Links a particularly common sight at conventions. On Friday, there were four teenage female Wolverines, complete with claws, sideburns, and chewed cigar, prowling as a pack.

For some, crossplay is about gender identification and politics: For others, it's because they think Iron Man is a cooler costume than Spiderwoman. On the floor, no one asked about motivation for those choices, just about materials and comfort. So is all rosy in the scene?

If the two panels dealing with diversity in geek culture &n-dash one anchored by the contributors to Weird Girls, the other by members of Gay Austin Geeks – there's a lot of work been done, and more still to do.

It's a sad fact that comic reviewers have to prep themselves for the same kind of online hate mail (and occasional intrusions into real life) normally reserved for news journalists who touch on hot button social topics (honestly, is there any publication that has run a controversial story and not spent the next few weeks opening parcels gingerly?).

Part of the problem is the anonymity of the Internet. As Weird Girl's resident gamer/cosplayer Zonbi sighed, "I wish there was an option next to every comment of 'mom's phone number'." It's lead to a different experience for tabletop gaming correspondent Amanda Lune, who argued that it's a lot easier to be abuse someone in an online MMORPG than across a Dungeons & Dragons character sheet. "If they're going to say something mean or horrible to me, they're going to have to contend with me having a response to their face, and to other guys in the room having a response."

Sometimes, fans have to create a new environment. Shane Brown founded Gay Austin Geeks, he half-joked, because he was sick of conversations about the Kardashians, when he wanted to talk about Dr Who. However, the group is not about pigeonholing. As game designer Kevin Walsh stated, he is more interested in characters who are gay, rather than characters where their sexuality dominates everything. That reflects his own personal experience: "I identify with being geek more than being gay. It just happens to be my sexual preference."

Walsh noted that straight gamer friends got upset that they lost friendship points if they rebuffed same-sex romantic advances in Mass Effect. For tabletop game designer Seth Mason, that seemed to be a glass-half-full problem. He said, "I like that the problem is that I lost points, not that a guy hit on me."

Does a character need to be a saint to be a good representation of the LGBT experience? Far from it. As Mason pointed out, one of the best bisexual characters in television is Captain Jack Harkness from Dr Who and Torchwood. He may not always be a role model, but he's not written as a cardboard cut-out.

There's a progression: Diversity among fans becomes diversity among creatives, and finally that translates into diversity portrayed in fiction. Kathryn Long, a technical artist at local gaming house Bioware, argued that the presence of FemShep and gay characters in the Mass Effect franchise reflects that the company hires a larger number of women and gay staff than is the industry average. However, many panelists were averse to having a character be of a specific gender or sexual orientation just to tick a box, because it can end up serving the story ill. For example, Long noted that the trans fan community will "latch on to" trans characters, whether well-written or well-portrayed, or not. However, she added, "Even problematic representations in media can be very powerful for people."

Over at the Weird Girls panel, discussion inevitably turned to the recent tectonic shakeups at Marvel Comics: Thor is a woman, Captain America is black. But this can sometimes seem like stunt casting: As one audience member remarked, why make the Human Torch black in the upcoming re-adaptation of The Fantastic Four? Why not diversify the character roster, like when Marvel created Miles Morales for its Ultimate Comics: Spider-Man title, rather than having a black Peter Parker?

Ultimately, diversity in media will drive diversity in fandom, and vice versa. It's not that film studios hate female or gay or trans or minority protagonists, it's that they are inherently risk averse and so go with the proven model of white straight males. Then again, there are straight male fans among the loudest advocates for a Black Widow or Captain Marvel movie, and who have swiped back hard at the #NotAllMen crew, and are just as likely to press the "report/block" button as anyone else. As gaming correspondent Kelli Nova observed, a lot of average guys are pigeonholed as "being obnoxious jerks", just because they happen to be gamers.

More importantly, they want to see creative worlds that reflect the real world. Per founding Weird Girl Danni Danger, "It's no fun going to a party with clones of yourself." 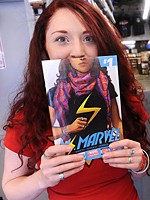