DVDanger: Sasquatch and Zombies and Demons, Oh My! 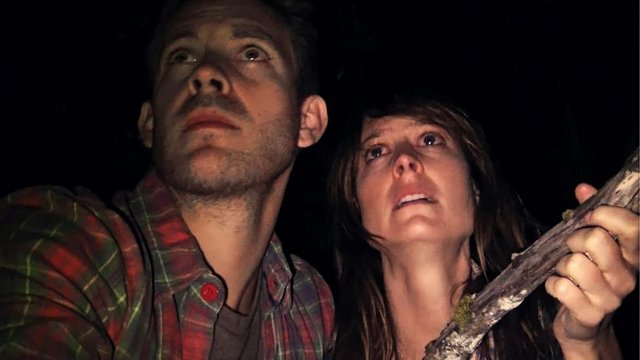 Someone wants in: Things get hairy in Bobcat Goldthwait's Sasquatch horror Willow Creek

Halloween is almost upon us. Well, close enough for horror fans to start scheduling their October movie selections.

Ah, All Hallow's Eve, when the monstrous intrudes on the mundane - or the everyday trespasses on the eerie. Beasts abound, and there's a great found-footage Sasquatch movie currently doing the rounds. Unfortunately, Willow Creek is not it.

It should be. Bobcat Goldthwait is on a terrific tear as a director at the moment. World's Greatest Dad was a benchmark performance for Robin Williams, while God Bless America stands as one of the great, acerbic commentaries on modern America's inherent nihilism. But Willow Creek is a terrible example of a film both under- and over-reaching.

It opens with a flash-forward indicating that matters will not end well for our protagonists, amateur documentarians Kelly (Goldthwait background regular Alexie Gilmore) and Jim (Bryce Johnson). The couple are investigating the area around Bluff Creek, location of arguably the most famous American Sasquatch footage, the Patterson-Gimlin film. Jim is far more excited by their camping trip than Kelly (and, as it turn out, simultaneously much more enthusiastic and complacent about their relationship).

Look, it's easy to kvetch about found footage, but, just like Jeremy Gardner proved with zombies in The Battery, there are still as many ways to do something fresh with the trope as there are directors: From the zany (Frankenstein's Army) to the postmodern (the upcoming Found Footage 3D) to the fourth-wall-warping (Mr Smith). Unfortunately, Willow Creek gets sucked into one of the most tedious conventions of the trope – the locals giving vague warnings about something horrible in the backwoods – and insists on pounding the audience over the head with it for 50 of its 82-minute run time. The pair visit every yeti roadside attraction, photograph every skunk ape mural, scarf down every Sasquatch-related meal they can find. It's boring.

And then Goldthwait pulls a minor miracle of tense cinema out of his hat. The pair are trapped in their tent, listening to bizarre sounds all around them, fearful for their lives, forced to communicate their fractured, terrified relationship through the tiniest of gestures. It's caught with one locked-off, half-dropped camera. And it's superb.

But ultimately, Willow Creek suffers, and will suffer further, because it's simply not as good as Exists, the return to found footage by The Blair Witch Project's Eduardo Sanchez. Where Willow Creek has a gimmick, and a head-scratcher of a payoff, Sanchez's tale of the beasts among the Bastrop pines binds the protagonists and antagonists together in a heart-rending tale of revenge and desperation. It has the kind of emotional depth, as well as genuine scares, that one should expect from, well, Bobcat Goldthwait. 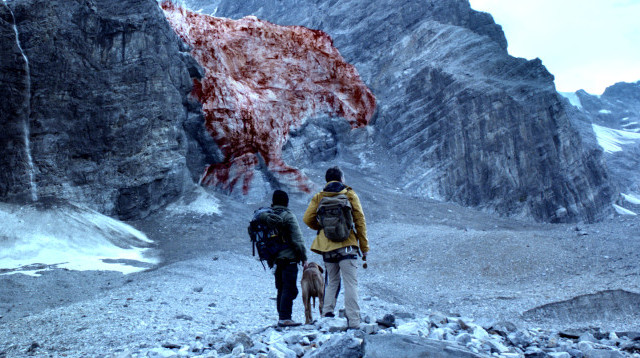 And this is why you shouldn't go mountaineering: Blood Glacier does for Alpine retreats what Jaws did for floaties.

Exists (which opens theatrically in Austin on October 24) also excels because it has some phenomenal practical creature effects, something it shares with Blood Glacier. Quick note: Do not, repeat, do not watch the dubbed version. Subtitles only, people, not least because it's far more respectful to the original performances. The title even sounds better in German – Blutgletscher. C'mon, say it with me. Blutgletscher. Eh, even translated, it's better than the generic English-language title to which is was originally subjected, The Station.

Somewhere up in the Alps, there's frozen nastiness. When the glaciers melt, it's released, but it's not some shambling monster. Instead, it's a disease that rewrites DNA. Yes, with a plot description like that, Blood Glacier undoubtedly owes huge debts to The Thing – hideous monsters, created by viral contagion, out in a remote, cold environment, slowly working its way through a cadre of dysfunctional scientists. But then, The Thing was a remake of the Howard Hawks original The Thing From Another World (well, more accurately, a new adaptation of Who Goes There? by John W. Campbell, Jr, but that's a different point).

But. Yes, there's a but, and it's in Blutgletscher's relocation of the horror from the otherworldly remoteness of the Antarctic to the mountains of Austria. That's like putting the mutant/mutating bugs on the Virginia stretch of the Appalachia Trail. Janek (Gerhard Liebmann) is the McCready here, a dissolute, bearded loner, grumbling at his more strait-laced colleagues. However, he's also the most scientifically inclined because when giant woodlouse/ibex hybrids start rampaging through the camp, he's the first one to note that covering this up may be a bad idea. His colleagues are more concerned that a group is coming from 'the ministry', headed up by the schoolmarmish Minister Bodicek (Brigitte Kren). Janke is more concerned about the fact that his ex, Tanja, (Edita Malovcic), is returning to the dangers of the camp.

Its core image – the melting snow cap with red – is subtly disturbing, if a little clearly CGI. However, the all-practical monsters are delightfully creative chimeras. As a fan of the sadly slighted The Relic, I was a sucker for its breed-bending designs, melding quadrupeds and arthropods: Trust me, you'll never look at a roly-poly the same way again. 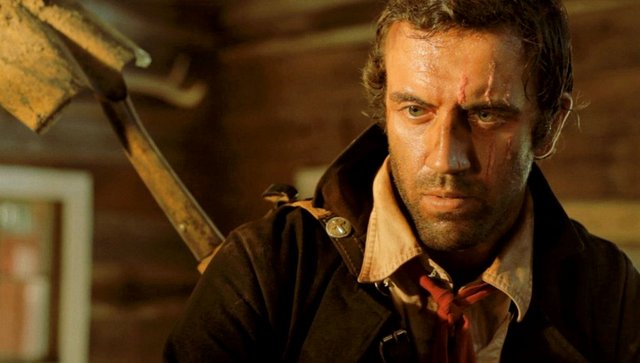 The long, bloody trip down the Revelation Trail as the undead rise in the Old West

Much more visually conventional are the threats along the Revelation Trail. This tackles another classic trope of the horror genre, the zombie apocalypse road trip, and adds its own twist. This time, it's the Old West getting its fair share of the roving undead.

A five-year labor of love by co-creators and writers Daniel Van Thomas, Blake Armstrong, and director John P. Gibson, Revelation Trail tracks dirt and horseshoes across Kentucky and Ohio, as the last survivors try to stay one tired footstep ahead of the carnivorous revenant. Yes, it's been done before, most recently in man vs. morality chronicle Dead Weight, and, yes, the despairing buddy anti-comedy The Battery. There has even been another 19th century tale of the undead, the episodic and mournful Exit Humanity.

But the similarities are superficial because the format is simply the vessel into which the story is carried. What it really comes down to is character studies, and that's why good zombie films – the ones that make the audience emotionally invested in the survivors – shamble on.

In Revelation Trail, it's the Preacher (Van Thomas) and the Marshal (Daniel Britt) trying to outrun the seeming end of the world. It all begins with the scarred and damaged Preacher telling stories. He likes to tell stories. Seems like a little bit of humanity in a world gone to some literal hell. Or, as the perpetual burr in his saddle points out, if this is the end times, why hasn't this good man been swept up to the heavens with all the other virtuous spirits? The Marshal is his antithesis: While the Preacher insists on giving the last rites and burying the body after he puts lead in their brains, the Marshal is just bothered about waking up the next day.

The advantage to the setting is that most post-The Walking Dead zombie stories posit a neo-Wild West anyway. There are guns, but bullets are rare; no cars, so you better be prepared to walk or ride; dinner is whatever you can kill, forage, steal, or just keep down; and health care is just about not dying. There's also a real feeling of a world beyond (not least because the creators have filmed a webseries that follows, through an animated journal, the sad fates of other characters). 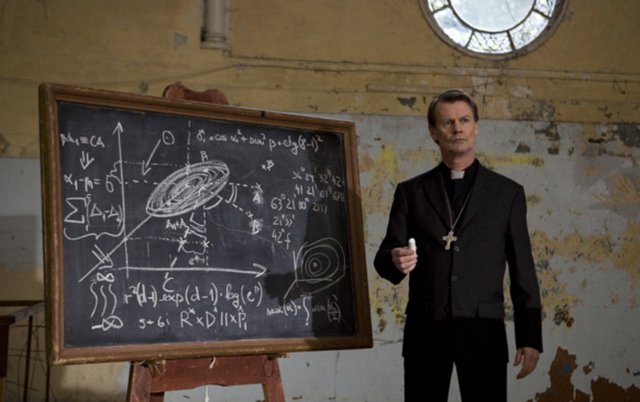 "So if we add a werewolf fog monster, add mysterious Satanists who may just be innocent passers-by, subtract narrative logic, add some surprisingly good cinematography ... what was I saying?" The Forbidden Girl is fun in spite of itself.

Honestly, the current wave of post-Paranormal Activity, demonic-possession movies have generally left me cold. They have felt like lifeless rail riders, careening to some tedious jump-scare resolution in the suburbs (Oculus, Sinister, and The Conjuring excepted). Seriously, parapsychology should never be prosaic, and, for good or ill, that's something no one can accuse The Forbidden Girl of being. Ludicrous, giddy, insane, low-budget, incoherent, jaw-dropping, fun – all of those, yes, but not prosaic.

It all begins with Toby (Peter Gadiot, now avoiding direct-to-video releases with TV turns in Once Upon a Time in Wonderland and Matador) and his girlfriend Laura (Jytte-Merle Böhrnsen). They're enjoying a surprisingly chaste make-out session in a mausoleum. Probably a bad idea, considering his father is a completely insane fundamentalist preacher who believes that his son will save the world, and he'll beat him thoroughly until he does. Imagine Bill Paxton in Frailty, but with even worse parenting skills. But somehow daddy dies, Laura disappears, and Toby is left a gibbering wreck and a ward of the state. Finally released into the general community, he secures a position as a tutor to a mysterious and (you guessed it) forbidden girl, who mysteriously looks exactly like Laura, but has the personality and erratic behavior of a moth on speed.

And it's around this point that writer/director Till Hastreiter decides to throw out all semblance of a plot in favor of every visual kitchen sink he can cram into frame.

An acolyte of Uwe Boll (without his more repugnant traits), somehow Hastreiter takes a completely berserk concoction, one that has no linear components or attempt to make sense, and just makes something stupid fun. Mostly stupid, but actually rather fun. He's saved to a certain degree by Klaus Tange (A Royal Affair, The Strange Color of Your Body's Tears) evoking Udo Kier and Clancy Brown as Mortimer, the house keeper who may or may not be a demon werewolf smoke monster. Meanwhile Böhrnsen gives the events somewhat crazy wings as the erratic and possibly supernatural forbidden girl, twirling like a young Stevie Nicks in a tornado and giggling all the way.

Sure, there are some shoddy CGI moments, including a lot of inexplicable shots of the sky going red or purple. But then Hastreiter's longtime cinematographer Tamás Keményffy suddenly pulls off a surprisingly beautiful image. It's inexplicable that suddenly something so elegant and well-crafted appears in the midst of lumpen cinematic mud, but it happens.

The real secret of The Forbidden Girl is that Hastreiter has recreated a long-forgotten literary genre: the Gothic romance. No, not Bauhaus, not Anne Rice, the real deal. The Monk. The Castle of Otranto. The Rosicrucian. Sheer nuttiness, unrestrained by reason or logic. Why is there a small child dealing cards in a limousine? Why does Mortimer keep dragging chains out of the bottom of the pool? Who's that cardinal? Why does no one notice that man has see-through legs? Who cut out those paper faces? None of this makes sense, nor should it. If your prose be purple, let it be vermilion, palatinate, mauve, and crimson.