Scripter talks Faults, Halloween, and running out of bullets 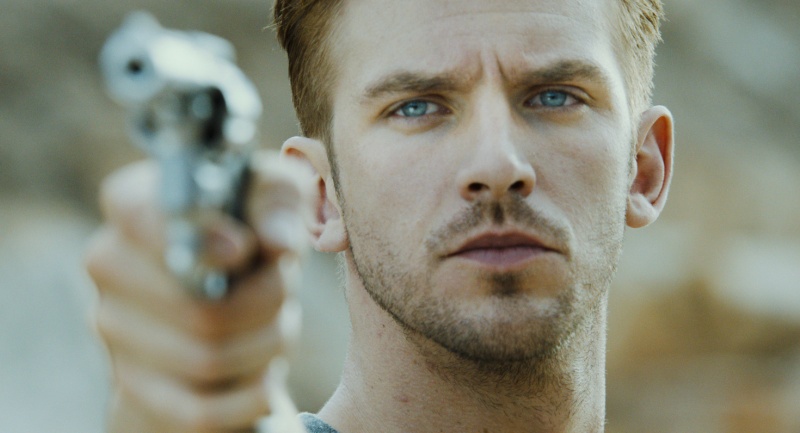 "I was really into the way that movie manages to build suspense despite being called The Stepfather, and letting you know right away what's going on." Simon Barrett explains the genesis of mysterious drifter David in The Guest

It's day eight of Fantastic Fest, and Simon Barrett may be the only person who doesn't look like 10 miles of bad road. The writer of 80s-tinged horror-thriller The Guest wisely only arrived for the second half of the bacchanalia. He said, "Normally I'm in way worse shape by now."

Along with his creative partner Adam Wingard, the Columbia, Missouri native has become an Austin festival regular. Their first collaboration, 2010's A Horrible Way to Die, snagged him a scripting award: Their follow-up, innovative home invasion thriller You're Next, swept the FF awards in 2011, then they returned in 2012 with a segment in 2012's ABCs of Death. They've also been SXSW regulars, through parts one and two in the VHS franchise, and receiving The Guest there this year.

That makes it pretty unusual to see The Guest back for a special screening at FF 2014, especially since it has already screened in other cities, and opened this weekend in Austin. Barrett said, "[Festival founder] Tim League, as he said in his intro, broke a long-established Fantastic Fest rule by showing our film, which is that it wasn't its Austin premiere. It showed at South By, but he's a big supporter of our careers and quite obviously of our careers."

Their latest film is also their biggest, with Dan Stevens (Downton Abbey, A Walk Among the Tombstones) as David, a veteran of an unnamed war who arrives at the home of a dead buddy's family. He soon charms his way into their lives, but it quickly becomes clear that he is far from what he seems (think Marvel's Weapon X program meets Jason Voorhees, but with killer abs).

Barrett is already planning to be back for Fantastic Fest 2015, with a project yet to be confirmed (although it's an open secret now that he and Wingard are working on an American adaptation of Korean cop-horror I Saw the Devil). Of course, playing the second half would give him a few extra hours to get the movie finished but, he said, "It's hard to turn down the opening night, because it is such a party. But then you have to be hooked up to a dialysis machine for the following week."

Austin Chronicle: So when was the point when you went, you know what, I'm going to do my own Universal Soldier?

Simon Barrett: You know what, it's funny. Someone brought up Universal Soldier not too long ago, and Adam and I were like, oh yeah. … It was more going back to the very first films that inspired us to start making movies when we were really young. Going back to the original Halloween, even though that actually came out before we were born. Well, it didn't come out much before I was born, maybe a couple of weeks. That movie, along with Bob Clark's Black Christmas, the giallo films, especially Twitch of the Death Nerve, the slasher genre of the '80s that was inspired by the success of John Carpenter's Halloween. Those were the first films I watched obsessively enough to figure out what editing was, and what camera work meant, and how to make films. Of course, my version was a VHS camcorder that I was able to check out of the library was not on a par with John Carpenter's work.

But I started imitating those movies, and obviously we don't want to make anything that is explicitly imitative or a pastiche piece. We always try to be innovative and do things that we haven't seen before and we haven't done before. It was more Halloween, The Terminator – for me, Donald E. Westlake's script for The Stepfather was a real touching point. I saw that pretty much when it came out. I was 10, 11 or so, maybe older, when it was on my neighbor's HBO. I watched it a bunch, and was really into it, and really into the way that movie in particular manages to build suspense despite being called The Stepfather, and letting you know right away what's going on. The details are so fascinating, because you never know exactly what Terry O'Quinn's going to do in any of those scenes. That was the kind of film I wanted to make.

AC: I saw this and Faults at South By at the same time. Were you just on adjoining sets, because you share half the cast?

SB: The films were shot basically back to back, and we're friends with Riley Stearns, who directed that film, and I'm a big fan of that film. But Keith Calder and Jess Calder produced both films, and it really was that they were casting Faults while we were shooting The Guest. So it really was, hey, you're doing a good job, do you want to be in Faults. So it's not just Leland Orser. Lance Reddick's in there, AJ Bowen's in there.

AC: You follow the progression from Horrible Way to Die, through You're Next, to this, and in your head you're going, hm, can I give Adam more shit to blow up?

SB: I don't know if Adam felt like he had enough shit to blow up. A lot of the stuff in that Peterson action house sequence, a lot of that was conceived by Adam walking through locations with me. We've never had the budget to build sets based on my scripts. It's always been finding locations and reconfiguring the scene to make it work. So a lot of that is just him walking through with me and going, this can happen over here.

Blowing stuff up is hard and is time consuming, is what we discovered during this shoot. Honestly, we always wanted to blow stuff up, but we never had the money to do so. The literal first conversation I had with Adam was the Hong Kong cinema of the '80s, early '90s, and how much we loved those films. Specifically, John Woo's The Killer was a huge reference point, and we're talking about how that movie's as good as it is. But we never could afford those squibs or grenade explosions that permeate Hard Boiled or Heroes Shed no Tears. We always wanted to make those kind of movies, but never had the resources. So after the success of You're Next, The Guest was the first time we could do something a little more action oriented. We had the money to blow things up, and then we discovered that blowing things up is miserable and dangerous and really difficult.

AC: Plus you have to make sure that you have enough of whatever it is you're blowing up to do it twice.

SB: During one of the shoot-out scenes, one of the prop wrangler guys comes over to me and says, I'm worried that we're going to run out of bullets. I was like, you've got to be fucking kidding. How many bullets did you bring? He was like, 20,000. Oh, that seems like a very reasonable number. How many have we used? He's like, we're on take three, and we've spent 8,000 bullets. OK, I'm not even going to tell Adam that, because it's just going to stress him out. Let me know when we're at 18,000 bullets. Because I want Adam to get what he's getting, and if he's getting it, then I'm not going to go over and say, hey, can you have the guys fire less?