A disco vampire descends on the Mediterranean 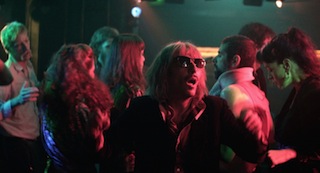 When aging party monster Zano arrives in town on a late-night train, his buddy Jimmy is nowhere to be found. Word is that Zardoz discotheque is where the party is at, but when Zano arrives he's the only one on the dance floor: living or undead. That doesn't dissuade him though, because if he stops dancing, his heart will stop beating.

Norway follows Zano on a one-night pursuit of a steady beat and a "warm girl," whose intentions prove to be anything but sunny. He locks eyes with raven-eyed prostitute Alice on the dance floor, follows her into the bathroom, and then proceeds to feed on her Norwegian drug dealer, who turns into a fledgling vampire stuck in a Weekend at Bernie's-style stupor for the rest of the film.

Drawn by the promise of sex, Zano joins Alice and the Norwegian on a series of underworld errands. She makes a bizarre pit-stop to turn a trick with a gas-masked john, then the trio treks to an underground mine-shaft dungeon where an elderly Bram Stoker impersonator eagerly awaits the gift of eternal life from the unsuspecting Zano, who is mostly concerned with where the hell his boombox went.

Zano is played as a cross between Johnny Depp's Jack Sparrow and Hunter S. Thompson, hips perpetually aquiver to a score of dark, squelching electronic music composed by Felizol (the musical moniker of Greek director Yiannis Veslemes). Even in the quieter moments, Zano's fried blonde hair is always swaying as if attached to a bobble-head. The kinetic performance carries the film and frees the supporting cast to act with understated creepiness while the joy-ride of a plot does the talking.

During his Q&A, first-time director Veslemes revealed that Norway was inspired by the obscure Greek new wave song featured in the closing credits. It's fitting, because both the song and the film fire on all cylinders of weirdness. Synthesizers oscillate with reckless abandon, the rhythm of the plot jerks spontaneously, and the lyrics are at times unintelligible, but the result is a fresh take on the vampire genre that would make even the coldest heart want to dance. 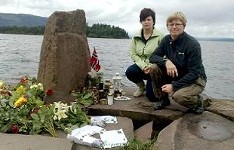 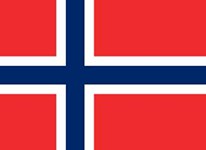 The Shadow of Oslo
How politicization drives presumptions in terror coverage