This low-budget masterwork is a bizarre comedy manifesto 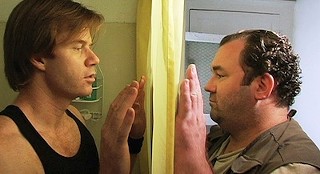 When someone asked me, post-screening, what the hell we just saw, I barely hesitated a moment before blurting out “It’s this year’s Rubber.” As in Quentin Dupieux’s audience fave from Fantastic Fest 2010. Dada-esque, non-sequitur comedy is alive, wild, and well.

Seven years and “hundreds of dollars” in the making, Bennett Jones’ perfectly titled film is either a masterpiece – it had the audience laughing along with every bizarre gag throughout – or a niche comedy manifesto so bizarre that only sleep-deprived festival-goers hot-wired on caffeine and alcohol and/or Kevin Smith’s not-so-secret stash could handle the “everything and the kitchen sink” weirdness. I’m leaning toward the former, seeing as how Jones, a standup comedian and songwriter from Los Angeles, created pretty much the whole thing out of thin air. Wacky doesn’t even begin to describe the finished product.

The director/actor/editor/musician/et cetera buries himself soul-deep in the role of Bené, a clueless French pop star who inadvertently finds himself on the paranoid tip after his name comes up on Fatwalist.com. Trapped in his Silver Lake apartment with only his personal security/best friend Beefy (Will Crest) and a box of strange-tasting eclairs to comfort him, Bené explains how this sorry state came to pass.

It began. as do all bad things, with his girlfriend Baguette leaving him, which leads directly into one of many surreal song-animations that litter the film like gumdrop landmines. (Dada!) Much of the charm of I Am a Knife With Legs stems from Jones’ total willingness to be completely, utterly ridiculous, in what turns out to be, often surprisingly, a very funny fashion.

Bebé wears shirts with a hole cut out to reveal his decidedly non-ripped abs, and his editing style is best described as “I have Adobe After Effects and a rudimentary sense of animation, and I’m not afraid to use them,” an aesthetic choice that makes zero sense in the real world but went down like free sake bombs at Fantastic Fest. Genius? Non! C’est magnifique!

Fantastic Fest 2014, I Am a Knife With Legs, Bennett Jones