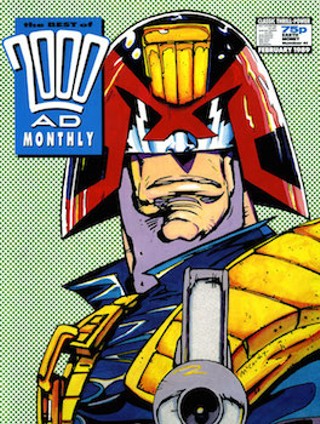 Average citizens may not recognize the title, but the monthly British comic book 2000AD has influenced the world in myriad ways. From film to music to the global pop-cult zeitgeist, 2000AD remains subversive and vital decades after its inception. Future Shock! is the unexpurgated story of one of the medium's most influential titles.

As revealed in Paul Goodwin’s absurdly watchable documentary, no one, not even the comic’s iconic antihero Judge Dredd himself, could’ve imagined the sheer impact to come when the scrappy indie upstart cried awesome and let slip the strontium dogs of fuckyeahthisrules! some 37 year ago.

It's hardly surprising then that 2000AD and its stable of now-famous writers and artists – Alan Moore, Neil Gaiman, Dave Gibbons, and Grant Morrison, just to name a few – debuted at the same time the UK punk scene blossomed amid the safety-pins-vs.-tear-gas chaos of the times.

2000AD creator and editor Pat Mills readily admits upfront the relationship between this wild, unkillable comic book, with its interlocking characters and occasional stand-alone stories, and the emergence of punk rock in the UK. 1977 was a pivotal year for the Clash, the Sex Pistols, and the Damned, who together formed a squalling soundtrack tailor-made for the sensibilities of 2000AD readers. When 2000AD hit the streets, it was to the background bedlam of ultra-right-wing National Front goons and antifascist Londoners engaging in running street battles. Blood ran in the gutters, and punchy from extended waves of protests, counter-protests, rioting, and a serious sense of sudden societal upheaval lurking beneath every cobblestone, England began to look less like a picturesque royal kingdom than a futuristic 2000AD storyline that had broken through into reality. Art mirrors life, but in 1977 clear through the grim reign of Iron Lady PM Margaret Thatcher and beyond, the opposite applied as well.

Future Shock crams in as many insightful and witty interviews with all manner of 2000AD fans as possible: Portishead’s Geoff Barrow talks, Anthrax's Scott Ian tells how he thrashed out a Judge Dredd anthem for his seminal metal outfit, Nacho Vigalando waxes rhapsodic and notes that there never would have been Fantastic Fest award-winner Timecrimes without his youthful love of 2000AD, 28 Days Later, and Dredd screenwriter Alex Garland enthuses … the list is goes on and on.

”There were no rules written down,” recalls writer Alan Grant. “You just wrote or drew what you wanted to.” And what 2000AD both wanted and gave in abundance to their worldwide readership was a particularly British brand of dystopian sci-fi (Strontium Dog, Judge Dredd, D.R. and Quinch) laced with a strong, left-leaning political subtext, and edgy black humor that ran through the entire publication. There was pathos, horror, love, honor, and a formative sense of subversive responsibility, to be sure, but once the artists figured out how to render crimson mist exit wounds by flicking a toothbrush dipped in red ink, the studied violence moved into Sam Peckinpah territory.

In many ways, 2000AD's visual style and socially conscious storylines began to echo those of the infamous EC Comics of the Fifties, which, coincidentally, were also highlighted by terrifically gory art braced against smart social-justice tales that tackled hot-button issues, such as American race relations, anti-Semitism, xenophobia, and the very concepts of God, men, and monsters. In 1954, EC was effectively neutered by the Senate Subcommittee on Juvenile Delinquency and the creation of the self-censoring Comics Code Authority. In England, 25 years later, the big editorial questions at 2000AD were "What can we get away with, and how far can we push the transgressive envelop before the anyone sues us?" Ultimately, lawsuits became a common enough event to joke about. That's to be expected when you do a story satirizing PM Tony Blair as a robotic action hero ("But is he bionic or demonic?" queried the cover copy.)

2000AD's success was guaranteed, and editor Pat Mills’ jaw-crackingly, action-packed creation spawned, predictably, a host of imitators, a few of them great, some good, most not worth the bother. Jamie Hewlett and Alan Martin’s Tank Girl owes a substantial debt to 2000AD’s Halo Jones stories, while industry-wide, the dark turn that American superhero comics took in the mid-to-late-Eighties (and which continues to this day) can also rightfully be attributed to 2000AD’s transatlantic sphere of influence.

As Future Shock points out, 2000AD’s writers and artists never looked to the American superheroes for their inspiration. Seventies-era Batman and Superman, with their capes, tights, and "justice forever prevails" outlook struck the more pessimistic Brits as somewhat silly and definitely too "American." Instead, Pat Mills names the celebrated French publication Metal Hurlant (Heavy Metal in the U.S.) as something to be emulated where possible.

2000AD's most iconic and longest running-and-gunning character remains the judge/jury/executioner Dredd. ”Judge Dredd was based on Margaret Thatcher,” recalls Grant. “The more fascistic we made him, the more the readers loved him.”

Future Shock! The Story of 2000AD is the final, warts 'n' all word on Britain's longest-running comic book, and director/editor Goodwin has made a vastly entertaining and wildly informative documentary that celebrates the indie underdog while never shying away from occasional inter-artist acrimony and bad judgment calls by editors. For a comic book that's survived as long as 2000AD has – that used to be the future, you know – it's a worthy tribute to what came before and a glowingly optimistic portrait of … who knows? 3000AD, maybe? It wouldn't surprise me in the least.