A day of brawling doughboys, two-headed freaks, and Tim Schafer

Fantastic Arcade fun continues through the weekend, but yesterday drew what will likely be the fest’s biggest crowd. Tim Schafer’s discussion of his classic adventure game, Grim Fandango, made for an over-capacity theatre filled with fans. But the day had several highlights. 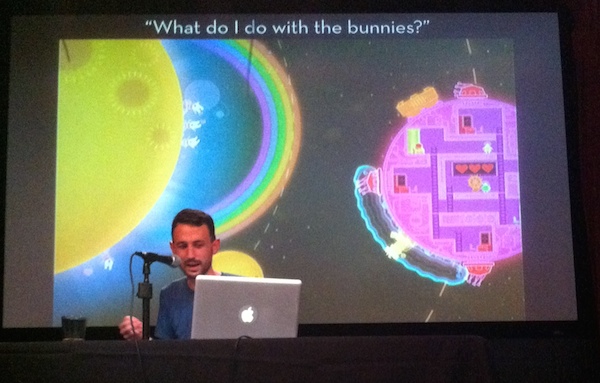 Matt Hammill asks the eternal question, "What do I do with the bunnies?"

Matt Hammill, creator of the manic co-op platformer/shooter Lovers in a Dangerous Spacetime, talked about the inspirations for his game. For example, the combination of space warfare and interpersonal relationships was cribbed from the original Star Wars films. That's always a good start. It’s a game of priorities, timing, and teamwork, but Hammill also emphasized what he called “candy.” In the case of LIADS candy comes in the form of neon glow, rainbows, saturated colors, and other icings on the cake of his game. What seem like frippery in and of themselves ends up informing the overall tone of the game: one of frantic fun.

Tim Schafer sat down with local developer George Royer to discuss his classic noir adventure game, 1998’s Grim Fandango, to a packed crowd. The always affable Schafer shared the source material for the game which included the folklore behind Dia de los Muertos and noir classics like Chinatown and Casablanca. Combining them for a video game might not make sense at first, but the panache with which Schafer did just that speaks to his inimitable talents. Always humble, Schafer claimed that “If you steal from enough sources, it’s like you’re not stealing at all.”

Many in the crowd of devotees were interested in the upcoming remaster of Grim Fandango. Schafer said, “The digital archaeology going on is really intense.” Apparently going back to former co-workers and asking them if they stole hard drives with content from the game is a little awkward. He continued to discuss a few nagging bugs in the original he hopes to fix as well as re-recording some tracks with a symphony. Schafer also fielded questions from the audience about balancing difficulty in a game, the finer point of the Grim’s folklore, and more. And then the interview was over, but Schafer wasn’t don’t with us yet.

Gang Beasts Is a Brotherly Brawl

James Brown discussed his game, Gang Beasts, with local developer Adam Saltsman. Turns out Brown’s co-workers on the game are his two brother, which makes immediate sense as you watch players flop, punch, grab, and tumble in ways that seem both violent and loving at the same time. That is until someone gets tossed in a massive meat grinder or falls into a fan. The bloodless mayhem includes brilliant level design that creates myriad gasp-enducing moments as players pummel one another while trying to avoid subway trains or balance on top of moving trucks. For the Fantastic Arcade tournament Brown and his siblings had created a faithful reproduction of an Alamo Drafthouse cinema with one notable addition: Large tentacles that reached out of the screen and grabbed players who ventured too close (see below).

Tim Schafer’s company, Double Fine, is publishing the doughboy brawler and Shafer stuck around to co-host the tournament with Fantastic Arcade regular JW Nijman. The ensuing laughs came from them and the game itself and won over many stragglers who just came to hear Schafer talk.

Crazy, Sexy, Creepy: The Push Me Pull You Story

It’s difficult to say if Push Me Pull You is sexy or creepy. Four players form two teams, with each player taking control of one end of a two-headed human/worm hybrid. The two teams then man their worm creature and try to drag a ball to their side of the screen using nothing but your body that can stretch and contract with the push of a button. Now that we write that we're leaning a bit more toward creepy, but it’s undeniably fun and immediately understandable and accessible to even the controller illiterate. Needless to say, the tournament got awkward in all the best ways and was the perfect way to end day two.