As the airhorns sounded, the indie game onslaught commenced

The Fantastic Arcade triumphantly returned to the HighBall and Alamo South Lamar with no shortage of cutting-edge independent games. Here’s what I learned from a surprisingly smooth day one of the fest.

The Spotlight Games Await Your Touch

Anyone who wants to play the eight spotlight games at this year’s Fantastic Arcade can find them in the glass-enclosed patio of the HighBall, their enticements running from the Benny Hill brawling of Gang Beasts to the subtle complexities of locally developed Spider: Rite of the Shrouded Moon to the Tempest-inspired anarchy of Banana Chalice. The cabinets will be playable throughout the entire Fantastic Fest, even after the arcade is technically over. 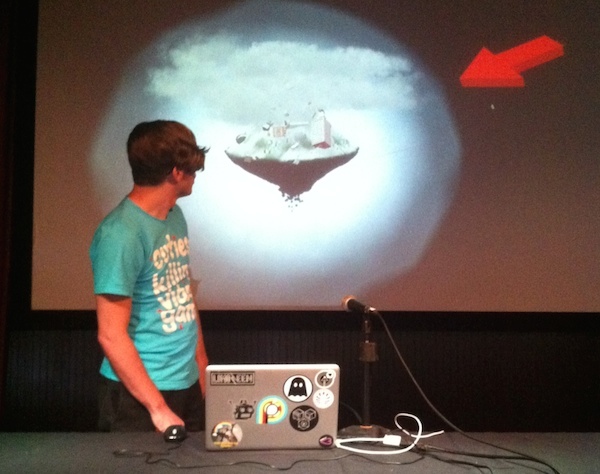 The Secrets of Mountain Revealed! (Spoilers!)

Another game that sits restfully in a custom arcade cabinet is the buttonless Mountain. You may know Mountain as the mobile and PC game that allows players about as little agency as possible. Aside from viewing your land mass at various angles the only thing to do is watch your mountain exist as it spins in the void. However, Damien Di Fede, who worked on the project with David O’Reilly, offered some interesting, if difficult to reproduce, “cheats.” Apparently certain ditties, when played with the simple keyboard built into the game, can effect the mountain’s environment. Di Fede played a melody that created a constant barrage of detritus and another that caused an instant snow storm. Perhaps most enthralling to those of us who have watched our mountain spin for countless revolutions was an end-game scenario, pictured above. The entire experience raised questions of mortality, identity, and, ya know, stuff.

Stephen Ascher brought his breakdancing-hot-dog simulator back to Fantastic Arcade for a second year. The game now boasts an exhaustive character creator (limited only by the fact that you have to be a hot dog) and an in-development dance-off functionality. The flopping, spinning, awkward posing, and fabulous outfits made for some fierce competition in the tournament. This is procedurally generated slapstick comedy at its best.

Thu Tran of IFC’s Food Party showed off a collection of motion-controlled games she made with help from Ivan Safrin. If you’ve ever seen her show, then the off-the-wall set-ups for the various mini games won’t appear quite as strange. Games included firing lasers at cars trying to cross a bridge, using kitchen utensils to perform heart surgery, and more. Any hesitance about flailing in front of an audience was surely lost upon seeing Tran leap with childlike abandon. We'll be seeing her again as the host of Sunday's Barfcade extravaganza.

The Airhorn Is Back!

The Arcade may be free and open to the public, but what if you don’t want to look like an arcade rookie? Just make sure you have an airhorn app on your phone, or at least be able to do a decent vocal interpretation. The airhorn sound is appropriate in almost all situations, but impressive tournament victories and failures are especially ripe for a blast. Here’s a helpful link if you want to practice.

Tomorrow's highlight is a conversation with Tim Schafer about the origins of Grim Fandango in the Alamo South Lamar at 5pm. Expect the Gang Beasts and Push Me Pull You tournaments, following Schafer, to be hotly contested. 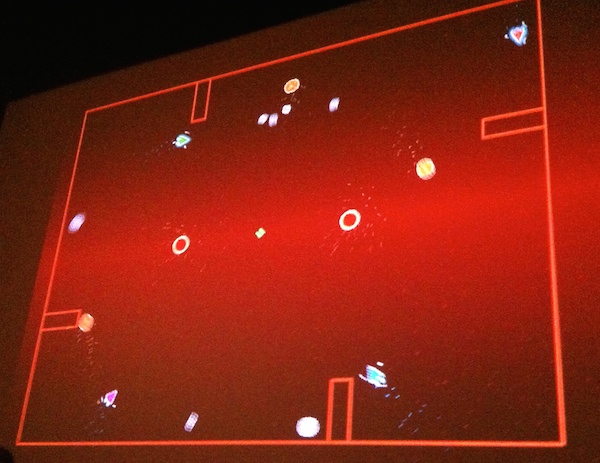 Rusty Moyher's Astro Duel made for some hot tournament action.