Jeremy Gardner and Adam Cronheim swing for the fences 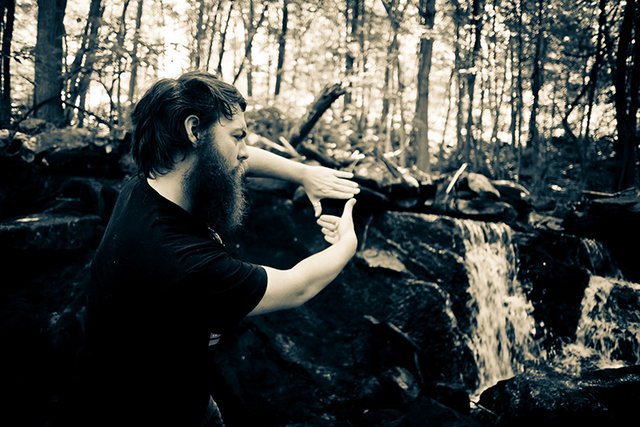 "If you told me tomorrow Nicolas Refn Winding was going to make a zombie movie, wouldn't you want to go and see it?" Jeremy Gardner, director, writer, and star of The Battery, explains why the undead genre has plenty of life left in it. (Photo by Christian Stella)

Necessity is the mother of invention. Sometimes, so are road blocks. That's part of why Jeremy Gardner wrote and directed indie horror The Battery, out of "frustration with the process of pounding the pavement and going to auditions."

There's a constant chorus claiming that the zombie movie is all played out. Honestly, the only thing that's hackneyed is complaining about the genre. The Battery is part of a wave of low-to-micro-budget undead horrors, along with Dead Weight and Revelation Trail, that bring something fresh to the rotting corpse. Gardner said, "I knew that zombies were on the uptick, but I also knew that the bubble was going to burst. But I always said that, look, if the bubble bursts, we could might be the thing that stands out because we're different from that, and if it doesn't burst, we'll benefit."

For Gardner, it all comes down to the quality sensibilities of the filmmakers. "If you told me tomorrow Nicolas Refn Winding was going to make a zombie movie, wouldn't you want to go and see it?"

Aside from his behind-the-camera work, Gardner is also one of the co-leads ("I wrote the movie as a showcase for myself" he laughs. "Well, not entirely.") Catcher Ben (Gardner) and pitcher Mickey (Adam Cronheim) are a pair of ex-baseball players: Ex, because the whole world has come crashing down after a zombie apocalypse. They're reduced to walking the backwoods of New England, scavenging for food and shelter, staying one step ahead of the cannibal corpses that now rule the world.

While Gardner always envisioned himself as Ben, Cronheim was a late, almost accidental addition. Gardner said, "[Cinematographer Christian Stella] started threatening not to come up and shoot the movie because I didn't have a co-lead." It was executive producer Casey Dohme who solved the problem. "He was like, 'My buddy used to play baseball in college and he hurt himself and became an actor.' I was like, 'What the hell, why wouldn't you tell me that?'"

New York resident Cronheim had found himself in a similar situation to Gardner, constantly rebuffed at auditions. Cronheim explained, "Everyone would say, 'You need to have more work on your résumé so we can hire you.' Well, I'm here for you to hire me so I can put more work on my résumé." When he finally met Gardner, the pair chatted, played a few games of catch, and Cronheim was on board. "He put a lot of faith in me up front, and I worked my butt off because I was grateful for the opportunity."

Why was it so important to have Cronheim know the national pastime? Simple. "I love baseball," said Gardner, but it quickly became pivotal to the characters. "Catchers are rough and tumble. They're big guys, they're dirty, they're squatting behind the plate for three hours. Pitchers are more finesse guys. They're painting the outside of the plate. I figured, to use those broad stroke character dynamics, then that would help inform how to write these two characters. Plus, I love forcing people to watch baseball." By filming in rural Connecticut over two weeks, Gardner and crew managed to find locations remote enough to depict a lifeless near-future without random people popping up in the background. The biggest issue, he said, was cutting out the constant drone of the internal combustion engine. "You could be in the middle of 200 acres of forest, and you'd hear a lawn mower, or a truck, or planes are going over. Everyone up there must own a Cessna."

Accidental sound was one issue; deliberate, another. For a $6,000 movie, The Battery has a surprisingly rich soundtrack, replete with acoustic folk and bluegrass that reflects the new hunter-gatherer existence. Gardner explained, "People would always say, how did you get this soundtrack?, and I tell them, artists want to help each other."

The first offer of musical assistance was unexpected. Gardner had Stella edit together a location scouting video, using a temp track by Canadian roots rockers Rock Plaza Central, "just because I'm such a huge fan of that band. I'd seen them six, seven, eight times in concert, I thought it hit the vibe of the film. I probably wrote most of the script listening to their music." This garnered him an early supporter: RPC frontman Chris Eaton. "He got in contact with me and said, 'That's cool, that video. You guys going to use the music in your movie too?'" Not only did Eaton introduced him to his label, but to another band that gave their music for free, The Parlor. Gardner was surprised, since the musician was "this weird indie rock god to me and I wasn't fit to talk to me, but he was so nice."

Then, by raw coincidence, Cronheim happened to be a friend of a friend of Chris Laufman, aka Wise Blood. Throughout the film, that's what Mickey listens to when he puts on his headphones. Gardner said, "All the other music fit my sensibilities in the pastoral setting and the green and the Americana and the folksiness, and it was fun to have Wise Blood and juxtapose what you're seeing with what Mickey's feeling with this electronica, pop music."

Not that Cronheim really knew what Mickey was listening to. He said, "When we shot the movie, there was never any music [playing on] the headphones." However, he knew that it was a powerful character beat, as Mickey tries to hold on to one last gasp of the old electric world. He said, "The headphones were his blankie, something he grabbed on to. The music, when we got to that, really started to reflect what was going on, not only in the world but in his mind."

Gardner added, "The best thing about this process have been that the bands have told us they've seen upticks in their sales, and people have found them because of this movie."

With the Blu-Ray release imminent, The Battery could become the calling card that Gardner and Cronheim hoped it would be. It already had a great festival run, with screenings at major genre festivals like Fantasia, plus audience awards from Scotland's Dead by Dawn and France's Mauvais Genre, and vocal support from underground genre heroes taste makers like the Soska Twins (American Mary) and AJ Bowen (You're Next, The Sacrament) "AJ's been one of our biggest, earliest champions," said Gardner, "He got me a buck knife for a gift for Christmas. He said, 'You're going to need it in L.A."

Yet while the film is getting plaudits, it's still an indie, fighting for attention in a crowded market. Gardner said, "I'm still waiting tables, Adam's still selling real estate. … The industry moves a little slower than you'd like, to the point that it almost feels like we're going to have to do it again, and maybe someone takes notice even more next time." But, he added, " I would never say this isn't the best time of my life. My dream came true, I made a movie, people love it, people I respect love it. I've seen standing ovations and had great times with audiences all over the place."

The Battery (Scream! Factory) is available on HD download via www.thebatterymovie.com and will be released on Blu-ray and DVD on Sept. 16.