Fantastic Fest Gives Us the Horns 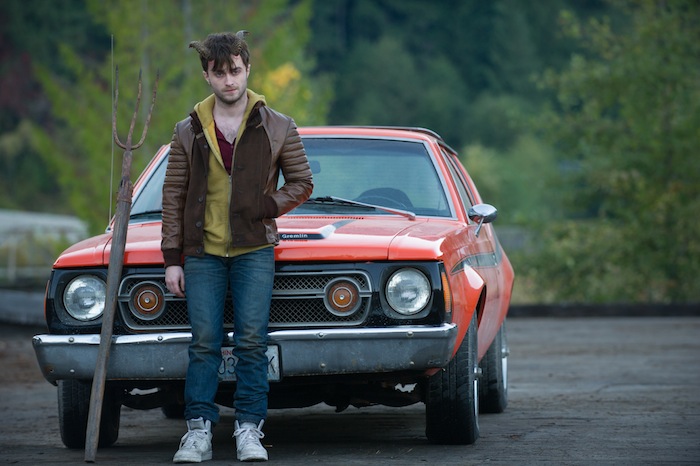 With the clock ticking (eight days and counting, folks), Fantastic Fest has announced its final wave of films, with Daniel Radcliffe's collaboration with Joe Hill, Horns, leading a pack that includes a host of premieres and some surprise returns.

Normally, Fantastic Fest (running this year at the Alamo South Lamar, Sept. 18-25) steers clear of reruns from other festivals, but this year they've made an exception to celebrate the work of some FF alums. So welcome again, Gerard Johnstone's Housebound, Adam Barrett and Simon Wingard's The Guest, and Nacho Vigalondo's Open Windows, all of which return after successful SXSW screenings.

So who else made this final cut? A glorious mélange of international madness, plus final word on those all-important parties! See below for official press release.

Thu, Sept. 18, Midnight - 2am
We're decking out our decadent decennium with a blowout fit for even the most debaucherous 10-year old. We’ll kick-off with costumed creatures, beat human piñatas, and throw in a breakdance competition. We’ll do it all in cardboard hats, balloons, noisemakers, and ridiculous mounds of confetti. And to top it all off, the psychopathic shindig culminates in a food fight that will shake the foundations of the earth.

Mon, Sept. 22, 11:59pm
This annual display of geek warfare, brainchild of FF hero Scott Weinberg, pits the globe’s greatest horror scholars against one another in a galactic display of mental agility, verbal hostility and full-tilt brutality. Bear witness to the most brain- flexingly rampaging display of trivia prowess in the universe.

Thu, Sept 25, 10pm
Obviously, a decade of insanity requires the grandest of finales. So we’re tearing the pages out of ABCs of Death 2 to annihilate the universe with 26 WAYS TO PARTY! We’re running down the alphabet from A to Z, cracking open a neon canister of radioactive wildness and unleashing a massive meltdown of madcap mayhem in FF history. Gird your loins for the ultimate experience in non-stop amusement/ abusement. LIVE TO PARTY, PARTY TO DIE. 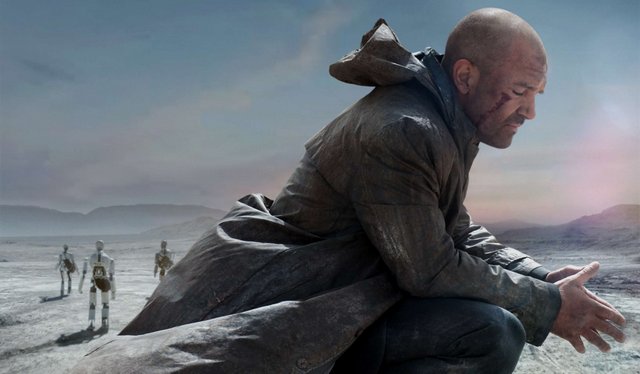 United States, 2014, US Premiere, 110 min
D: Gabe Ibañez
In the post-nuclear apocalypse there will be robots, and insurance agents played by Antonio Banderas. He’s investigating an insurance claim on a faulty robot that leads to greater discoveries.

Belgium, 2014, US Premiere, 85 min
D: Jonas Govaerts
A boy scout troop goes on a camping trip that they will never forget in this brutal, uncompromising horror film.

Argentina, 2013, North American Premiere, 76 min
D: Martín Desalvo
Things are a bit off in Virginia’s tiny village. Something dark is coming her way. And now she’s left alone with her sick cousin, unaware of the dangers around her. 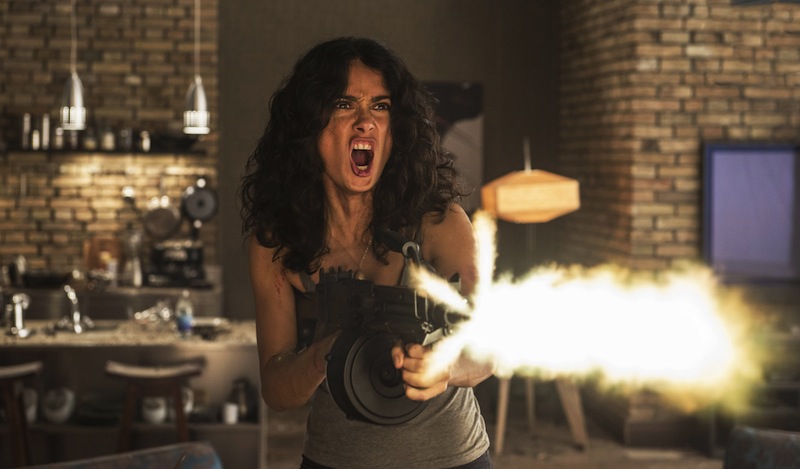 Salma Hayek lights up the room in Joe Lynch's Everly

United States, 2014, World Premiere, 92 min
D: Joe Lynch
Salma Hayek stars as a tough yet vulnerable woman who must fight her way through a gauntlet of assassins in this fist-pumping action thriller.

Ireland, 2015, World Premiere, 90 min
D: Conor McMahon
Mark and Sarah are trapped, darkness is falling and the creature outside only attacks by night in this fast-paced Irish horror.

United States, 2014, Special Screening, 99 min
D: Adam Wingard
Looks are definitely deceiving when a dashing soldier with a propensity for violence moves in with a grieving family in this fun-as-hell, Carpenter-esque action thriller.

Poland, 2014, US Premiere, 87 min
D: Krzysztof Skonieczny
A misanthropic young man plunges into an intense relationship with the daughter of the couple he means to kill.

United State, 2015, World Premiere, 89 minutes
D: David Yarovesky
A young man suffering from amnesia must dig deep into the far reaches of his mind to remember who he is and save the love of his life before a virus that has infected him takes over.

New Zealand, 2014, Special Screening, 107 min
D: Gerard Johnstone
Forced to return to her childhood on house arrest, Kylie discovers that there are more sinister forces in the old homestead than just her overbearing mother.

United Kingdom, 2015, US Premiere, 112 min
D: Gerard Johnson
Crooked cop Michael must deal with machete-wielding Albanian brothers while handling pressure within his own department in this gritty crime saga from the director of Tony.

I Am A Knife With Legs

United States, 2014, US Premiere, 83 min
D: Bennett Jones
First his girlfriend dies in a suicide bombing. Then a fatwa is issued against him. And now international Europop star Bené’s eclair is weird.

United States, 2015, US Premiere, 107 min
D: David Robert Mitchell
After an innocent sexual encounter with her boyfriend, a teenager is stalked by an increasingly evil force in the year’s smartest and scariest horror film.

Ireland/United Kingdom, 2014, US Premiere, 89 min
D: Brian O’Malley
On small town constable Rachel Haggie's first night on the job, she encounters a strange man whose presence and knowledge threatens to destroy everyone.

United States-United Kingdom, 2014, North American Premiere, 97 min
D: David Gregory
The amazing true story of one of the most notorious Hollywood productions of the 1990s. 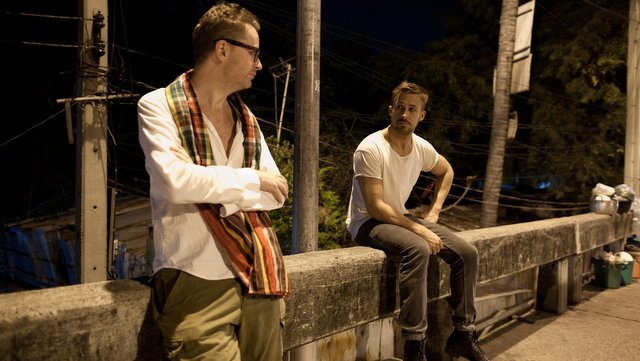 United States, 2014, World Premiere, 58 min
D: Liv Corfixen
An impossibly personal portrait of unique filmmaker Nicolas Winding Refn over the course of the shooting/release of his 2013 film Only God Forgives.

China, 2009, Texas Premiere, 114 min
D: Ning Hao
A city lawyer fights for his life in the cutthroat deserts of contemporary China in Ning Hao's Coen-esque follow-up to Crazy Racer, which was banned for four years. 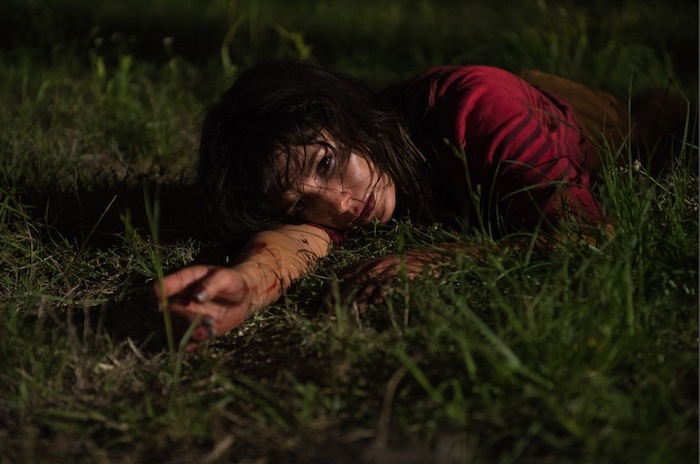 The Town That Dreaded Sundown

United States, 2014, Special Screening, 85 min
D: Alfonso Gomez-Rejon
Based on a terrifying true story, The Town That Dreaded Sundown picks up sixty-five years after a masked serial killer terrorized the small town of Texarkana, when the "moonlight murders” begin again. Is it a copycat or something even more sinister? A lonely high school girl, with dark secrets of her own, may be the key to catching the murderer.

Ukraine, 2014, US Premiere, 132 min
D: Myroslav Slaboshpytskiy
Winner of the three major awards at this year’s Cannes’ Critics Week, The Tribe follows deaf student Sergey’s transfer to a new school, which sends him down a path of ruthless crime and forbidden love.

Belgium, 2014, US Premiere, 97 min
D: Pieter Van Hees
Hard edged homicide cop Leo is plunged into a dark and dangerous world when he takes on the murder of a young Congolese man. Will unraveling the truth cost his hold on his own life and happiness?

Japan, 2014, US Premiere, 118 min
D: Tetsuya Nakashima
Tetsuya Nakashima injects his signature style into a brutal and shocking thriller about one repulsive father’s quest to find his missing daughter … who just might be worse than he is.