Nerd out with The Stream, Angry Video Game Nerd: The Movie 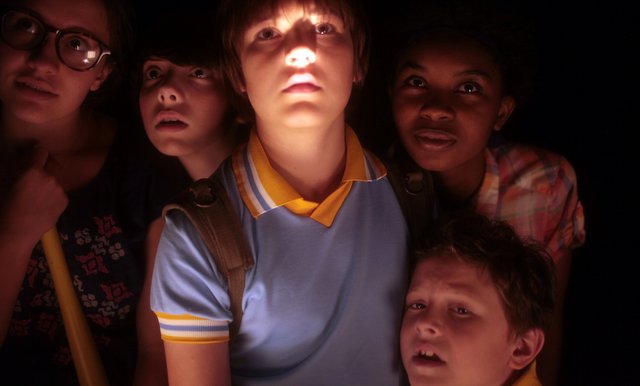 The gang's all here! The Stream is PG, family friendly fun. Wait, which column is this?

Ah, 1976 to 1983. There will never be another time like it for cinematic obsession, and the makers of The Stream (Cinedigm) know it.

That's when every kid loved Star Wars. OK, except maybe that one weird kid that claimed Battlestar Galactica was better, but that was up there with eating paste.

Back then, you picked up a stick, or a piece of rebar, or a long enough wooden spoon, and you automatically started making the woosh-woosh-shaKAW sound, and pulled your t-shirt over your head so you could pretend it was Obi-Wan's cloak. That's how middle schooler Ernest Terry (Jacob M Williams) convinces all his friends to turn their daily game of capture the flag into Wiff-saber. But when his wifflebat meets its inevitable fate, he and his friends set off on an illicit adventure to the nearby sports store to get a replacement.

Yeah, it's scarcely a galaxy far, far away, but the quickest way there is to take the path by the stream. It's a big adventure for small people, and that's all the story that The Stream wants to tell.

It's undeniable that Star Wars still strikes a cord with filmmakers. Initially, it was either rip-offs (Battle Beyond the Stars, Starcrash) or spoofs (Spaceballs). Now there's a minor cottage industry of films talking about how George Lucas' creation affected them personally, from local artist Kurt Volk's The Last Hope to Patrick Read Johnson's long-gestating 5-25-77 (a project of such passion that it even has an accompanying making-of/road movie Hearts of Dorkness as he tried to get it completed). Yet whereas Johnson's movie has an edge of sadness and innocence lost, this may be the most well-intentioned nerd-bait movie of the last couple of years.

No, really. This film is a fundraiser for The Boys and Girls Club of America, so don't expect anything approximating to the subversive genius of I Declare War.

Instead, this is a simple, old-fashioned rites of passage movie of the most PG-friendly flavor. It's scarcely even about Star Wars at all, beyond a few bad ass vintage toys and some knowing nods in the wipes. Instead, this is about first kisses and pre-teen friendships. It's cute and undemanding, and, best of all, it was shot in part by young filmmakers through the Boys and Girls Clubs.

So, yes, it deals in some tropes that may seem a little hackneyed. There's the tomboy girl next door (Noura Jost) and the Milhousian best friend with a nervous vomiting problem (CJ Diehl), a chirpy little brother (Michael Capperella, a shoe-in to play Dewey if anyone ever reboots Malcolm in the Middle) and the sharp-tongued pal along for the adventure (Sabrina D. Carter). There are highschoolers and babysitters and concerned parents and mild, after-school-special-style perils.

Best of all, there's a voice-over from none other than Rainn Wilson, whose entire career has been about throwing the audience for loops. As a guy who made his mark playing low-grade sociopaths (The Office), dangerous lunatics (Super) and fishboys (House of 1000 Corpses), his warm tones as the reminiscing elder Ernest are the finishing touch to the sweet-natured story.

Quick, to the beermobile! Angry Video Game Nerd: The Movie

And at the polar end of the retro nerd scale … Back in 1982, a whiffle bat had to stand in for a lightsaber, and imagination had to cover all the other basis. So when the eponymous hero of Angry Video Game Nerd: The Movie moans, "Even my dreams are low-budget," he's talking 2014 low budget, and that means you can make an entire film on a lap top, and it still looks good. Cheesy, but good.

AVGN:TM (as we shall call it) is the unlikely slightly bigger screen spinoff of the Angry Videogame Nerd webseries, in which the eponymous AVGN (James Rolfe) reviews old games with due prejudice. The film dumps the enraged Internet hero in the middle of a berserk big plot that involves Area 51, mad scientists, and the greatest gaming conspiracy ever: Whatever happened to the ET: The Extra-Terrestrial videogame?

For those of you that don't know the story, in 1982 Atari hired gaming genius Howard Scott Warshaw to design a game based on the hugely successful film for the Atari 2600 console. A couple of minor problems. One, they wanted it to fit the movie's no-violence rule, which was a major turn-off for many players. Two, they only gave Warshaw five weeks to single-handedly design and code it. Unsurprisingly, it was a dog turd of such monumental proportions that the company sucked up a half a billion dollars in debt, and threw many unsold cartridges into a pile of 728,000 games that were then unceremoniously dumped into a landfill in Alamogordo, New Mexico.

Angry Video Game Nerd, or Nerd to his tiny coterie of friends, finds himself dragged into the idiocy when gaming company Cockburn (yeah, don't looks for too much subtlety here) launches a brilliantly sinister scheme. Executive Mandi (daytime soap survivor Sarah Glendening) proposes a next gen sequel to the worst game ever (redubbed Eee Tee to avoid Amblin's lawyers), and get the Nerd to review it. Yet the original is part of why Nerd is so angry. A traumatic run-in with the original as a small child left him embittered, if furiously hilarious, and now he's forced to face his nemesis on a road trip to the infamous landfill. That is, unless the military, the FBI, UFOs, and the whole gaming community manage to wreck Mandi's plan.

Does it sound like an overstretched concept? Well, that's probably what they said about giving a TV horror host a movie, and who doesn't love Elvira, Mistress of the Dark? Well, everyone apart from the Razzies, and they don't count. It's got that same goofy charm, the same screwball appeal of Weird Al's masterwork UHF.

OK, it's not that great, but the mix of unflinching nerd comedy and broad jokes, plus some hardened pop culture references (the Caddyshack gopher, that Star Trek rock in the desert, a Raiders of the Lost Ark musical sting), and old school man-in-suit Kaiju pleasures, is dopey, gleeful fun. Hey, unlike Godzilla, we actually get to see ubermonster Death Mwauthzyx devastate downtown Las Vegas (eh, it's the cheap end of the strip. Would anyone really miss Excalibur these days?). Plus, there's a delicious cameo by another YouTube sensation, Eddie Pepitone of the exquisitely evil Puddin' series - a perfect compliment tothe anti-charm of the Nerd and his gurningm rage-fueled visage.

If it commits any sin, it's that it has no business being 114 minutes long. Yet even if it seems overlong, it's filled to over-brimming with caustic zaniness. All in all, for a week when SyFy canceled The Wil Wheaton Experience it's heartening to see a web icon making some transmedia headway.

Now if we can only get Zero Punctuation in IMAX …

The Stream (Cinedigm) is available on DVD now. Angry Video Game Nerd: The Movie is available to buy or rent through Vimeo on Demand.