Parental perils in Proxy and The Sacrament 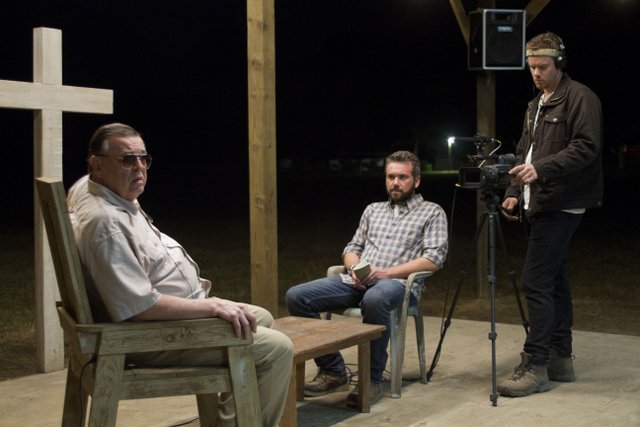 Swanberg's extensive directorial résumé (Kissing on the Mouth, Hannah Takes the Stairs, Nights and Weekends, the glorious Drinking Buddies, and about a billion more) are small character and relationship studies. But his most memorable performances have been in horror: The smug elder brother Drake in You're Next, and the supportive but secret-laden boyfriend Kevin in A Horrible Way to Die.

The Sacrament (Magnolia) may re-enforce that acting/directing dichotomy. It started off as writer/director Ti West's long-gestating idea to re-create the story of the Reverend Jim Jones and his People's Temple of the Disciples of Christ: Not just the legendary and horrifying mass murder/suicide at Jonestown in Guyana, but the whole story, from its foundation in Indianapolis through to the grisly conclusion. West wanted to make a multipart TV miniseries, but that project never got off the ground (seriously HBO? Starz? Seriously?) and instead he devised this thinly veiled dramatic re-creation of the final terrible hours.

On paper, this is really actor AJ Bowen's film. Quite literally. I had pho with Bowen a couple of years ago, just before The Sacrament started filming, and he was nervous and giddy. Out of a 75 and a half-page script, Bowen was on 75 of them. It's basically a reunion of A Horrible Way to Die's cast, as Bowen plays Sam, a reporter for Vice, who with his cameraman Jake (Swanberg) heads to Central America with fashion photographer (Kentucker Audley.) He's gone to find his sister Caroline (Horrible Way lead Amy Seimetz), who has joined what seems like a cult. What they find at Eden Parish is a hands-on utopia, where everyone pitches in for a simple life … until the leader, known as Father, sends his flock right over the cliff.

This isn't found-footage horror. It's a POV immersion into quiet, desperate madness. And that's what makes it powerful. When the cameras are stripped from Sam and Jake's hands, and Father's followers catalog their own quiet atrocity, it's far removed visually from West's exquisite haunted-house imagery in The Innkeepers, but it is viscerally terrifying because it is so plausible. Because this kind of thing has happened.

While Bowen is physically present for most of the film, he has a counterpart, a shadow hanging over the events. Father is built up through implication, through members of Eden Parish – an old lady tending crops, a nurse, a mother, a few guys playing ball – before he finally appears. And he's a schlub. A charismatic schlub, but a schlub all the same. When Father (Gene Jones) sits down for an interview with Sam, he's smart, charming, and beloved by his family. This first talk is a battle of subtleties, as Father makes a convincing, even seductive case for why he and his followers, his family, have rejected modernity. But there's venom in there as well as Bowen and Jones dance around each other, subtly assailing the trades and beliefs of the other. When they meet again, it's on the other side of madness.

Previously most famous as the gas station attendant who gets on Anton Chigurh's coin-flipping bad side in No Country for Old Men, Jones is a revelation in these sequences, and brings out the already acknowledged best in Bowen in exchanges that will leave nail marks in your chair arm.

There's a moment when Father asks Sam about his family at home, and the whole narrative flips. Bowen's response is subtle, basically wordless, but that's the instant when the serpent in Eden Parish is revealed. Neither man is really a full-fledged father – one has taken the name, while the other is waiting for true fatherhood when he returns home to his pregnant wife. Superficially, this is about the terrible power of faith. West never makes Father's followers look like fools, but instead gives reasons – personal, political, religious, socio-economic – as to why they would reject modernity and flee to the jungle. But in those moments, it's about two men jousting over the power and responsibility of fatherhood, both biological and assumed.

Between two such performances, Swanberg might have gotten lost. After all, as the cameraman, he's actually acting behind the lens for most of the film. During one of the making-ofs included on the disc, Swanberg admits that it's sometimes limiting as a performer. But in his subplot as Sam's Jiminy Cricket, he provides the voice of reason and get-the-fuck-out-of-here-ness in the middle of the madness. 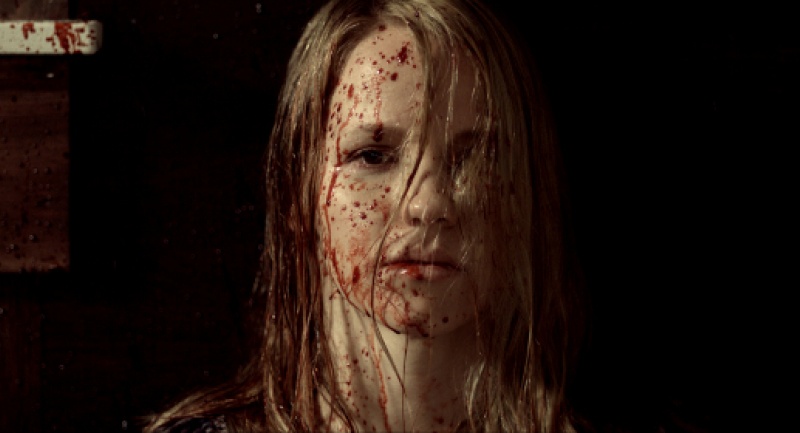 Alexa Havins contends with the pains of motherhood in Proxy (Image courtesy of IFC Films)
He plays a similarly sidelined and beleaguered observer in Proxy (IFC), but if The Sacrament is a battle of bulls, in Proxy he is basically the only adult male present. Instead of paternal pride, this is a meditation on motherhood. That is, in the same way that French fetus-theft horror Inside is about the miracle of childbirth.

Swanberg plays Patrick, husband to Melanie (Alexa Havins from, er, All My Children), who makes a new friend, Esther Woodhouse (Alexia Rasmussen). Their connection seems tragic. Melanie suffered terrible losses in a tragic accident. Esther is attacked by an unseen assailant in the opening moments of the film, and her unborn baby is lost due to the vicious and disturbing attack. The pair meet at group for mothers who have lost their children, but it becomes quickly clear that grief counseling is the last thing either needs.

Director Zack Parker stepped into similar disturbing waters with 2011's Scalene, a Rashomon-inspired tale of physical abuse and twisting perspectives. Yet again, he tackles the perversion of the maternal instinct, as neither Melanie nor Esther turns out to be the sympathetic victim they appear to be. Rasmussen initially has the same broken butterfly damage as the eponymous lead of Lucky McKee's May: But like Angela Bettis in that seminal, feminist psychological horror, she is quickly revealed to be more than just damaged (especially when her lover Anika, played by indie horror regular Kristina Klebe, arrives with a prison-tough attitude).

Yet it's Melanie and her complex, manipulative relationship with goodhearted Patrick that brews up the most stomach-churning twist. As Swanberg depicts a man collapsing into despair when his whole world implodes beneath him, there's a glacial mania in Melanie's responses. Like a less arch and salacious Lars von Trier (there is a violent sequence in slow motion that undoubtedly tips the hat to the Dane's Depression Trilogy), Parker twists the knife deep into the suburban belly, and it's the shattered Patrick who feels the cuts deepest.

Proxy (IFC Films) and The Sacrament (Magnolia) are available on DVD and Blu-ray now.