Your Shortcut to FXX’s ‘The Simpsons’ Marathon

On Thursday, FXX launches an historic TV marathon, airing all 25 seasons of The Simpsons back to back to back. But since most of us can’t sit out work for 12 days straight to watch reruns, and recording 552 episodes would break even the hardiest of DVRs, we've whittled down the field to 11 not to miss. 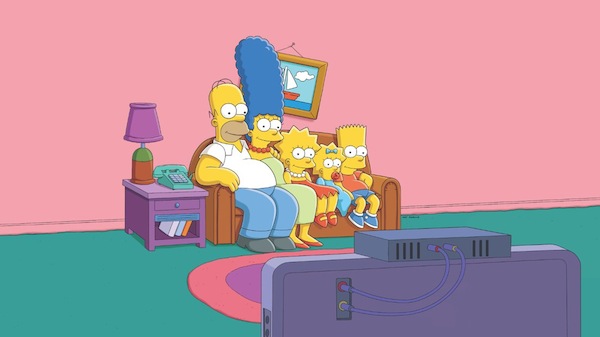 When Homer buys poor, put-upon Marge a birthday gift he knows she’ll never use – a bowling ball he preemptively monograms with his own name – Marge calls his bluff and starts taking lessons with a turtlenecked lothario named Jacques (voiced by “A. Brooks” – that’s A for Albert, a recurring guest voice and pal of Simpsons’ producer James L. Brooks). As Marge toys with the idea of infidelity, I imagine a lot of tiny jaws dropped all across America: How many of us ever stopped to consider the interior life of our mothers? In 1990, I was begging my mom for a “Don’t Have a Cow, Man” T-shirt to match my jams. (No dice. She thought Bart was a degenerate.) It’s a shame she never got into The Simpsons. The episode-ending homage to The Officer and a Gentleman sailed right over my head back then, but it woulda stuck the landing with my ma – and I bet, too, she would’ve appreciated the message that our mothers deserve better.

What’s a Halloween without candy, scares, and a Treehouse of Horror? Literate, self-referential, surprisingly bloody, the annual tradition is the only episode many people still bother to watch, and the original remains a peak of horror comedy. The three mini-tales of terror were clearly fantasies within the series proper, but they were still the characters we knew and loved, rewritten into classic bloodchillers like Poe’s "The Raven": Marge as the rare and radiant Lenore, Homer as the writer, and Bart reinvented as the eponymous bird, bane of his stupefied father’s life, with “Eat my shorts!” transmogrified as “Nevermore.” 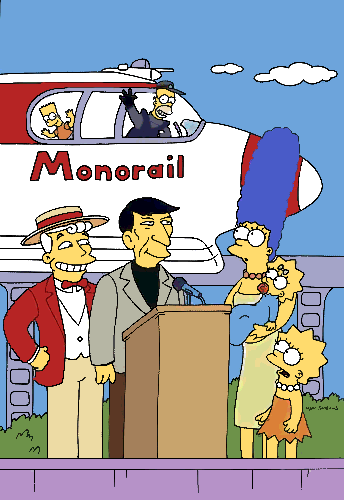 After his stint as a writer for Saturday Night Live, Conan O’Brien managed to get a much-coveted spot as a producer and writer for The Simpsons. While only there for two years, O’Brien had a big hand in transforming the series from the “cowabunga” early years to the off-the-wall heyday that would be its trademark. O’Brien’s Monorail episode is a perfect case study, with its astronomical joke-per-minute ratio and some of the show’s finest guest spots, including the inimitable Phil Hartman as the singing conman and an expertly used Leonard Nimoy as himself. Best line: Referring to the family of possums where the fire extinguisher should be Homer says, “I call the big one Bitey.”

As a charter member of Men Unafraid of Expiration Dates, I have never felt my kinship with Homer Simpson more deeply than in “Selma’s Choice."

Marge: You've been eating that sandwich for over a week. I think the mayonnaise is starting to turn.
Homer: Two more feet, and I can fit it in the fridge. The Simpsons nail political satire in this prescient episode, which sees Sideshow Bob getting released from prison thanks to conservative talk radio host and Rush Limbaugh lookalike Birch Barlow. He then mounts a successful mayoral campaign to oust Mayor Quimby, backed by a cadre of Republicans (including Mr. Burns and Rainier Wolfcastle, naturally), so it’s up to Bart and Lisa to uncover potential electoral fraud. The writing in this ep is top notch, with a slew of references to Willie Horton, the Nixon/Kennedy debate, All the President’s Men, and, of course, Matlock. This episode also marks the first use of the word “meh” on the show, and, with the inclusion of John Parr’s “St. Elmo’s Fire (Man in Motion)” cements “Sideshow Bob Roberts” as a bona fide classic.

“And Maggie Makes Three” is the apex of sitcom greatness. Just ask this Scientician…uh… He’ll tell you that perhaps no other episode manages to be both this hilarious and genuinely touching. This episode typifies the kind of humor golden-era Simpsons is known for but what "AMMT" highlights is how much humanity and dignity the writers give the characters. Amidst the jokes and flexible reality, you believe that the Simpson family does, in fact, care about one another. "AMMT" makes a strong case for the idea that one of main reasons we love The Simpsons is because the Simpsons love each other. 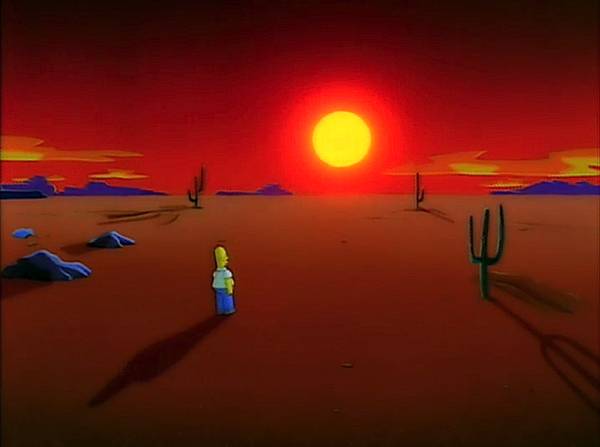 “Of course everything looks bad, if you remember it.”

Meet Chief Wiggum’s inedible chili using peppers “grown deep in the jungle primeval by the inmates of a Guatemalan insane asylum,” a spiritual journey a la Carlos Castaneda, Homer’s spirit guide (a talking coyote voiced by the Man in Black himself, Johnny Cash), an inevitable shipwreck, and hot pants. Marge (once again) saves their marriage.

The Simpsons’ sitcom archetype dates back at least to the Romans’ miles gloriosus – the macho buffoon who knows everything, and therefore nothing. This hilarious episode encapsulates so many of the notions of the heroic, spiritual, and romantic life. It’s almost worth eating the Guatemalan Insanity Peppers. The Simpsons’s nuclear family, aggressively “normal” with a breadwinner, housewife, and two and a half (the mostly silent Maggie) kids, has always been the perfect microcosm of the particularly American tendency to other. Like all the best episodes, “Homer’s Phobia” uses everyman Homer to neatly dismantle the nation’s most damaging stereotypes, wrapping it up in the warmth of a sitcom hug. When the writers finally devoted a full episode to the nation’s gay panic, they did so with an affable John Waters – his likeability contrasted against Homer’s irrational fear that Bart will somehow turn. In the process, the episode explores masculinity and the pleasures of camp with a frankness that was rare in the Nineties – and lands one of the series’ best jokes. Homer takes Bart to a steel mill in an attempt to expose him to “real” men. In a flash, the whistle blows, turning the mill to gay nightclub “The Anvil.”

AKA The Simpsons goes shark-jumping. While the cast were at home renegotiating their contracts, loyal fans were subjected to a clip show. It’s not just that “Gump Roast” is lazy. It’s that it relishes its own laziness (who spoofs Forrest Gump in 2002?) and does nothing but remind us of funnier stories. The closing song, "They'll Never Stop the Simpsons" (a pastiche of Billy Joel’s 1989 single “We Didn’t Start the Fire” – so cutting-edge), is both threat and promise. This was Bart turning into Grandpa Abe. 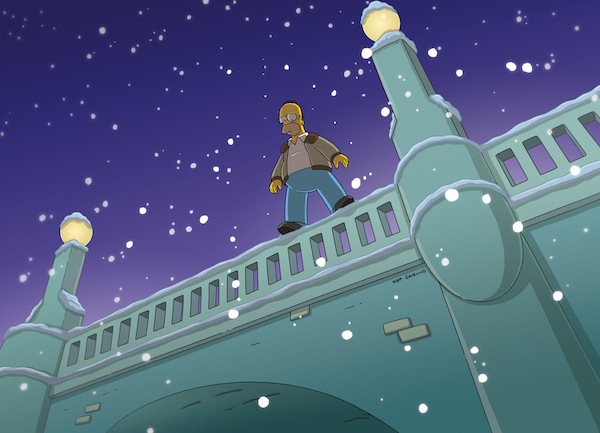 This one’s a keeper for the recipe to the Forget-Me-Shot alone. (Don’t try this at home: Jägermeister, sloe gin, triple and quadruple sec, gunk from a dog's eye, Absolut Pickle, the red stripe from Aquafresh toothpaste, and the venom of the Louisiana loboto-moth, stirred with a pregnancy test-as-swizzle stick.) When hungover Homer wakes up with his memory wiped, he tries to figure out what drove him to Moe’s for that shot. The answer is surprisingly poignant, and the episode’s hat tips to It’s a Wonderful Life, The Game, Eternal Sunshine of the Spotless Mind, and YouTube viral video “Noah Takes a Picture of Himself Everyday for 6 Years” are amusing and tender in equal measure. It’s not the first time the Simpsons has gone 3D, but this homage to the LEGO brand is better than it has a right to be. It offers a cute story and quality laughs rather than relying on the novelty of seeing your favorite character assembled with toy bricks. Splitting its time between the usual Simpsons world and the LEGO world, the references and reproductions of popular Springfield locations keep the smiles coming. Laughs abound with highlights from Rev. Lovejoy and Ralph (Is it possible for Ralph to NOT be funny?). It’s hard to do something new in a show’s 25th season, but this episode proves the Simpsons still have something to say, and it’s funny. 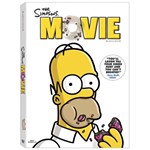 Homer for the Holidays
Fox gives away Simpsons Santa hats at just the right price.