From Sin City to Odd City 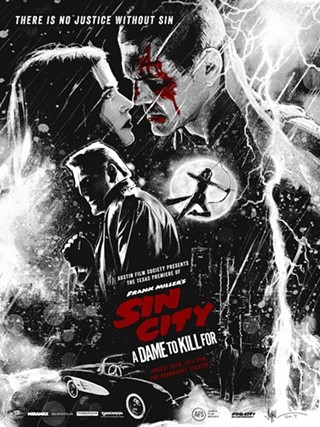 A poster to kill for: Odd City and Paul Shipper debut this fundraising Sin City: A Dame to Kill For print for the Austin Film Society

Ain't nothing odd about a little sin. So it makes sense that Austin's newest suspects in the poster biz, Odd City, will be releasing a special Sin City: A Dame to Kill For print for the Austin Film Society screening of Robert Rodriguez's new super-stylized neo-retro-noir.

The limited edition run of 200 prints will be available for $45 at the special preview screening on Aug. 20 at the Paramount Theatre. How special? Not only will Rodriguez be there, but so too will his co-director (and the creator of the original comic) Frank Miller and none other than Aerosmith's resident hip-shaking shrieker, Steven Tyler, who performs the track "Skin City" on the soundtrack.

Tickets for the screening are on sale now via the Austin Film Society website ($30 general admission, $135 for VIP tickets, including entry to the after party at the Rattle Inn). The poster, by UK based artist Paul Shipper, will be available both at the screening and the party, with any remaining prints on sale via www.oddcitystore.com on Friday, Aug. 22.

All proceeds from both the screening and the poster will go to AFS.