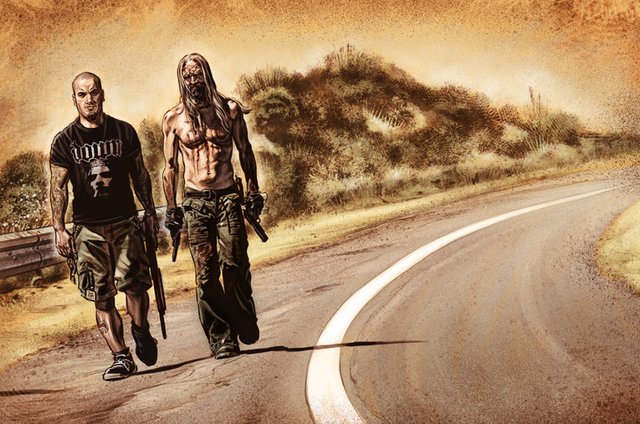 The Housecore Horror Film Festival had already announced that it will be the location of the official 40th anniversary cast and crew reunion of The Texas Chain Saw Massacre. Now the family gets bigger, with the announcement of special guests from The Texas Chainsaw Massacre Part 2, and anti-digital joy with special VHS and 35mm screenings.

The 'saw-themed weekend long weekend (Oct. 23-26) is already promising headliners including the hitchhiker Ed Neal, desiccated grandpa John Dugan, and of course Gunnar Hansen, the original Leatherface. Now the sequel offers up Hansen's successor behind the mask, Bill Johnson; Caroline Williams, who played sassy last girl Stretch, and went on to further horror sequel success in Stepfather II and Leprechaun III; and one of the true gentlemen and legends of horror, Bill Moseley, who has scarred multiple generations as Chainsaw 2's deranged Chop Top and Otis in House of a Thousand Corpses and The Devil's Rejects, making us laugh as Crazy Max in Holliston, even singing as Luigi Largo in Repo! The Genetic Opera.

As for the films themselves, festival founders Phil Anselmo and Corey Mitchell are huge vintage horror fans: Anselmo himself has a legendarily huge VHS collection, and last year the 35mm archival screenings, including copies from the personal collections of directors like Jim Van Bebber and Jörg Buttgereit. This year, not only will there be more celluloid delights like zombie Nazi skullscraper Shock Waves, but Justin Giallo, former programmer at the Grindhouse Theater in Tacoma Washington, will be running special screening sessions in the VHS Vomitorium. From 7pm to 2am every night, he'll be showing classic '70s and '80s schlock, exclusively on VHS, with beanbags, couches, and a big screen TV (all we need now is Cheetos and wood paneling.) Not only that, but Mike "McBeardo" McPadden will be on hand to show films from his bestselling (and rave reviewed) history of metal/horror cinema, Heavy Metal Movies.

Now let's get specific about the celluloid screenings. Here's the list of what's been announced so far, including semi-lost classic The Witch Who Came From the Sea, and Satanic panic special Race With the Devil:

Creepers (AKA Phenomena)
D: Dario Argento, starring Jennifer Connelly, Daria Nicolodi, and Donald Pleasance, 1985
A young girl, with an amazing ability to communicate with insects, is transferred to an exclusive Swiss boarding school, where her unusual capability might help solve a string of murders.

Dr. Tarr's Torture Dungeon
D: Juan López Moctezuma, starring Claudio Brook, 1976
A mysterious man is sent deep into the forest to investigate the bizarre behavior of the notorious Dr. Tarr. What he stumbles upon is the doctor's torture dungeon, a hellish asylum completely cut off from civilization and presided over by the ultimate madman.

Frightmare
D: Pete Walker, starring Rupert Davies and Sheila Keith, 1974
Edmund and Dorothy Yates are freed after fifteen years in an asylum. Edmund covers up for his wife who is a murderer and a cannibal. Dorothy's daughter and stepdaughter may have inherited her appetites.

Gates of Hell (AKA City of the Living Dead)
D: Lucio Fulci, starring Christopher George, Michele Soavi, and Giovanni Lombardo Radice, 1980
A reporter and a psychic race to close the Gates of Hell after the suicide of a clergyman caused them to open, allowing the dead to rise from the grave.

Race With The Devil
D: Jack Starrett, starring Peter Fonda, Warren Oates, Loretta Swit, and Paul Partain, 1975
Two couples vacationing together in an RV from Texas to Colorado are terrorized after they witness a murder during a Satanic ritual.

Tourist Trap
D: David Schmoeller, starring Chuck Connors and Tanya Roberts, 1979
A group of young friends who are stranded at a secluded roadside museum are stalked by the owner who has the power to control his collection of mannequins.

What Ever Happened To Aunt Alice?
D: Lee H. Katzin, starring Geraldine Page and Ruth Gordon, 1969
Aunt Alice applies for the job of housekeeper in the home of a widow in order to find out what happened to another missing widowed friend.

The Witch Who Came From The Sea
D: Matt Cimber, starring Millie Perkins, 1976
A disturbed woman is haunted by memories of childhood abuse, which culminates in a murder spree.