Remember when being a leading actor in a horror movie was cool? Like, Jack Nicholson in The Shining cool, and not, "Why haven't you fired your agent?" cool? We do.

Anna (Vertical Entertainment) looks at first glance like a cut rate Minority Report. Its original title, the cheesily '80s Mindscape, would only reenforce that idea. Instead, it's a creepy and charming slice of psychic mystery, bolstered by a strong cast.

Taissa Farmiga (most famous for the first season of American Horror Story and as playing her older sister Vera's younger self in Higher Ground, then her daughter in At Middleton) is the eponymous Anna. She is the privileged daughter of a wealthy family, but one with more issues than Psychology Today. Fortunately, this is a world of viewers: Psychics who can dip into a person's memories. When Anna's parents call on the services of such a viewer (Mark Strong), they want John to find some way to fix their girl's shattered psyche. As is, she's locked up in the attic, painting pictures, under constant video surveillance, with a sealed medical and legal record that would put a working class kid in the slammer for life.

But this is rich folks, so they hire a psychic shrink. However, and here's the twist: The normal job description for a viewer is a memory detective. John's quest to find what mental trauma first so damaged the artistic and seemingly brilliant Anna turns into an investigation.

Anna's opening ten minutes are a flop, an infodump mess with the traditional clumsy narrative device of a TV commentator explaining memory detectives. Time out: This is the worst, cheapest trick in the book, and never looks like real TV. Directors, script writers, please stop doing this, particularly as it is usually a way to get audiences to understand something that every person in the story would understand anyway. Would an evening news anchor stop for three minutes, mid-story, to explain what a plumber is? No. So don't do it for your SF concept. It's lazy writing, bad storytelling, and is less narrative shorthand and more like drawing on the walls in crayon.

Get past that first 10 minutes, and Anna is a really interesting modern twist on the high Gothic: John as Jane Eyre, bypassing the downstairs residents of Thoirnfield Hall, instead running straight upstairs for a nice chat with the first Mrs. Rochester.

It's an assured and queasily unnerving feature debut from director Jorge Dorado: A constant fixture as an assistant director on Spanish-language films from The Devil's Backbone to Talk to Her, he brings the same kind of Iberian Gothic sensibility spearheaded by Guillermo Del Toro, and continued by his acolytes like Jaume Collet-Serra (Orphan) and J.A. Bayona (The Orphanage.) While he never quite reaches the visual heights of the startling and similarly-themed Vanishing Waves (one of my favorite unsung releases of 2013), he whipsaws the audience's feelings about Anna without ever giving them jarring whiplash. As John becomes submerged in her little-girl-lost memories, he fails to see the genius – and often manipulative – mind in which they sit.

And credit to the lead pairing. Emerging for the cancellation of AMC's failed Breaking Bad successor Low Winter Sun (see Importing a Low Winter Sun", Aug. 11, 2013), Strong is basically here to do the Mark Strong thing. He does that 'damaged and brooding' sense of menace so well, and here applies it to the story of a man misguidedly trying to save a child that may not need a savior. It's the kind of role that a lot of tough guy actors have tried, as the psychological savior of a damaged wunderkind (Bruce Willis did it twice, first in the so-so Mercury Rising, then getting it right in The Sixth Sense.)

It's also a startling leading role for Farmiga. She has the uneasy innocent shell wrapped around a sensualized, sociopathic spirit of a young Leelee Sobieski (think The Glass House.) Their scenes together, which are the heart of the film, balance between creepy and compassionate. 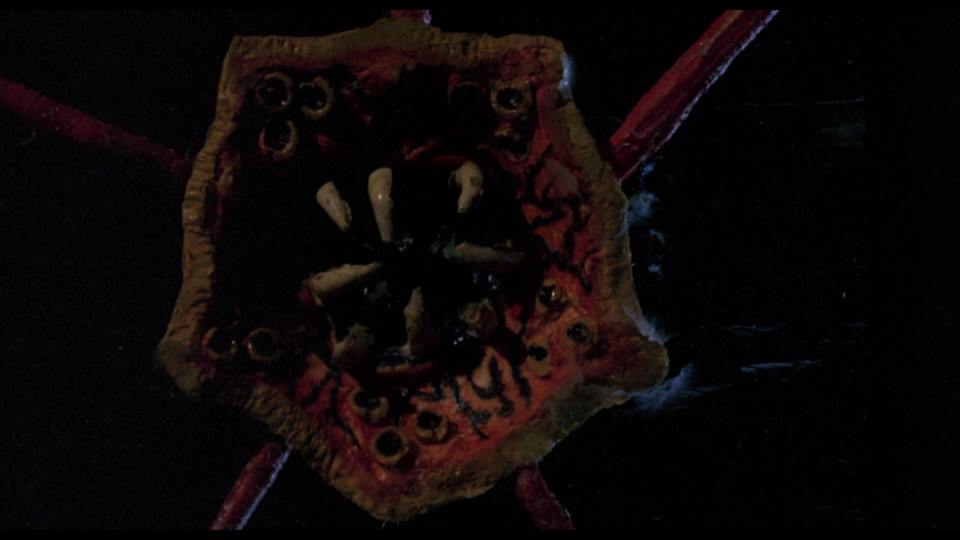 "Landau and Palance are on set? Oo, lemme see, lemme see!" One of the cast of '80s sci fi shocker Without Warning gets a little star struck (Image courtesy of Scream! Factory)

Talking of films with actors seemingly slumming it: (In)famous for possibly being the uncredited inspiration for Predator, 1980s Without Warning (Scream! Factory) is really most noteworthy for a pairing that should have happened years earlier: Jack Palance and Martin Landau.

This being the through-the-looking-glass world of '80s casting, the legendary duo are actually supporting characters. Instead, it's the typical pair of teen couples, headed out to the lake for some bikini time. Sandy (Tarah Nutter) is the slightly more prudish, more worried one of the group, although her boyfriend Greg (Christopher S. Nelson) pushes her to keep hanging out with Beth (Lynn Thell) and her irksome beau Tom (future TV star and Hollywood flame out David Caruso, who pushes his obnoxiousness to 11. No surprise that Palance almost punched him out on set.) Then an alien appears (well, mostly hangs around off-screen) and starts turning them all into hunting trophies.

The alien itself, when it finally turns up, does a fine impression of Balok, the big-headed puppet from classic Star Trek episode "The Corbomite Maneuver" (remember, the one where Clint Howard is the world's ugliest baby?) Tossed off by Rick Baker on a slow afternoon, it's '50s hokum. It's so immobile that even the man under the mask, go-to monster guy Kevin Peter Hall (Harry and the Hendersons and, totally coincidentally, Predator>) cannot make him less than a jerky statue. However, his living weapons - sentient Frisbees that look like carnivorous mynocks - are creepily impressive. Designed by future Oscar winner Greg Cannom, they ooze and slime, sucking the blood out of the monster's victims. They're legitimately creepy, and little stomach turning. Not bad for a hairy carnivorous pancake.

It also looks a better than might be expected, due to the presence of future cinematography legend Dean Cundey. He was still converting his success as cinematographer on Halloween into a way out of exploitation flicks, and was only here because he wanted to work with producer Greydon Clark one last time. Afterwards, he became John Carpenter's go-to director photography, as well as lensing a slate of films, including Apollo 13 and Jurassic Park, for Steven Spielberg. This is nowhere near that good, but points to him for showing loyalty.

But there is real poignancy in having Palance and Landau on screen together at a low before their respective resurrections. How bad? Two years later they shared a screen on the low-grade slasher Alone in the Dark. Yet within a decade and a half, both would score best supporting Actor Oscars (Landau in 1994, deservedly, for his tragic depiction of Bela Lugosi in Ed Wood, two years after Palance got a lifetime achievement award disguised as a nod for City Slickers.) But even in this low-quality, low-budget interstellar shocker, they still feel like bright giants among red dwarfs. In the traditional extensive extras now expected from a Scream! release, their co-stars delicately avoid calling the Method-heavy Landau a complete pain, while trying to not gush too much about the much easier-going Palance.

Sure, this is both men at their hammiest, with Palance as the steely-eyed hunter turned alien tracker Joe, and Landau as his shell-shocked and half-drunk buddy Sarge. But when Palance runs, shrieking, at the invader, bellowing, "Alien! Aiiiileeeeeaaaaan!" at the top of his lungs, this Z-movie jumps straight to at least a B+.