Mondo plants its flag in Toyland, and 'Manglehorn' heads to Toronto

Tiny giants and festival berths are in this edition of Film Flam. 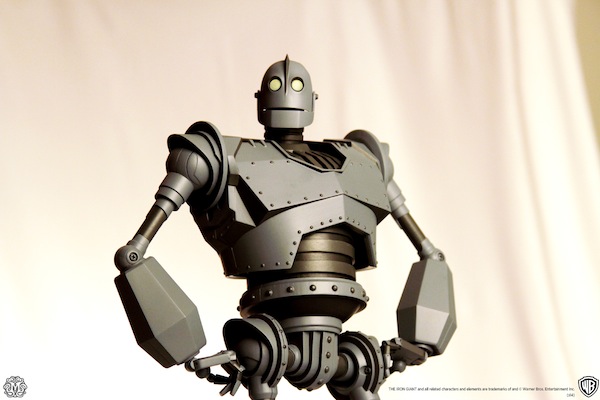 “I want that. I must have that.” If you follow Mondo, you’ve surely thought that to yourself at some point. (It's certainly happened to me, and I’m looking at it framed on my wall right now.) The poster gallery + purveyor of pop culture goodness, a subsidiary of the Alamo Drafthouse, announced yesterday that it’s getting into the collectible toy game.

Mondo is using Comic-Con as the occasion to unveil its first toys, including a 15th-anniversary Iron Giant twofer (a 16-inch IG, plus a life-sized replica of his bolt); Lil Mikey, a Teenage Mutant Ninja Turtle vinyl figure based off of TMNT creator Kevin Eastman’s original drawings; and a 1/6 scale Alfred Hitchcock figure featuring “his director’s chair, clapboard, cigars, as well as props from his most famous films- a butcher knife, a raven, and a seagull.” (On the subject of the latter: I want that. I must have that.) No news yet on pricing or preorder info, but now’s probably a good time to point out that the first-ever Mondo Con will take place Sept. 20-21.

“Angelo Manglehorn is a small town locksmith who never got over the love of his life. Clara was a beautiful, idealized woman who left him heartbroken 40 years ago. He still writes her letters obsessively as he tries to find her and get back the woman of his dreams. Manglehorn is the journey of this magical man, his son, his cat and a beautiful new woman trying to help him put the pieces of his heart back together.”

The film shot in Austin in late 2013, which means locals will get to play the “hey I know that place!” game, starting with the first film still released.

Boyhood star Ellar Coltrane was on Jimmy Fallon last night, charming and self-composed and talking about his teen acne. (DVR alert: Rick Linklater will be on The Daily Show With Jon Stewart tonight.)

If you want to drill deeper into the Boyhood backstory – and you’ve already read Dan Solomon’s terrific cover story from last week – then check out this video of the Q&A from Boyhood’s Austin Film Society-hosted premiere a couple weeks back.