The return of Eurosex with 'Nymphomaniac' and 'Under the Skin'

Sex sells, as the saying goes. It also horrifies people, and makes them laugh. But while American film makers seem ever more prudish on the topic, it's up to their European cousins, as always, to grab the bull by the, ahem, horns.

Not that America's actors aren't still daring, even the biggest names. It's intriguing that, as Mark Ruffalo (once considered an outre choice to join the cast of The Avengers) is now becoming more mainstream, his fellow superheroes are making more radical choices. Chris Evans adds American star power to Korean political allegory Snowpiercer (read our interview with director Bong Joon-ho here), and now Scarlett Johansson turns art house heads in Under The Skin (Lionsgate).

This is only director Jonathan Glazer's third film to date. His debut, 2000's art house crime flick Sexy Beast, was a minor masterpiece. His follow-up, 2004's Nicole Kidman vehicle Birth, was a risible catastrophe. When it was announced that he would be working with another red-haired Hollywood star, audiences should have clenched. Instead, he has produced one of the year's most adventurous and engrossing art house horrors.

Johansson plays a corpse. That is how she is first seen, a dead body dumped by a black roadside on the outskirts of Glasgow, Scotland. She is collected by an unknown motorcyclist, who dumps her in the back of a white van and transports her to a mysterious white room, in which she is confronted by … herself. The other her strips her, and leaves the body.

What moves and walks now is a monster in human form. She patrols the streets of Glasgow in that van, picking up strange men, bringing them to an abandoned home, and then subjecting them to a strange and eerie fate.

Glazer never explicitly says what the unnamed thing is – an alien, a probe, a robot – none of that matters. She is other, and it is the fact that she looks like Scarlett Johansson that allows her to seduce men and feed them to the unknown and unnamed process. And don't expect scientists or the army to come to the rescue, Them-style, or a gumless Rowdy Roddy Piper to save the day. She is serial killer as silent and bloodless seductress.

That's what this film is really about: A carnivore, a lure, an entity whose purpose is to pick the easiest targets, get them away from the pack, and consume them. This is Invasion of the Body Snatchers from the viewpoint of the pod people, as the predatory Johansson (her signature red mane hidden under a jagged black bob) comes to terms with her assumed guise of humanity. Even silent and stock-still, she has enough obvious charisma to carry every frame. And, yes, the fact these are her first nude scenes obviously sold some tickets (although a few audience members were probably pretty seriously baffled and disappointingly unaroused by the end). But this is really her performance – creating a feeling of an entity that is trapped in echoes of humanity.

Beautiful and terrifying as the cinematography of Daniel Landin (The Uninvited) makes the stone streets and grey-green wilds of Scotland look, it's really the sonic collaboration between Glazer's longtime sound engineer Johnnie Burn and composer Mica Levi (of avant garde experimentalists Micachu & The Shapes) that defines the sense of underlying horror. Glazer's decision to set the film in Glasgow, home to one of the most impenetrable British accents, allows Burn to imply meaning, to cut the improvised dialogue to a low murmur. Then Levi's strings skitter and glide over the top, like a praying mantis waiting to strike.

But it all comes back to Johansson. It seems like she is deliberately challenging herself as an actress, placing barriers in her own way that she must exceed. Last year, in the phenomenal Her, she carried her character through only her voice. Now she is near-silent, and depends solely on an almost mime to imply the inner life of a parasite. 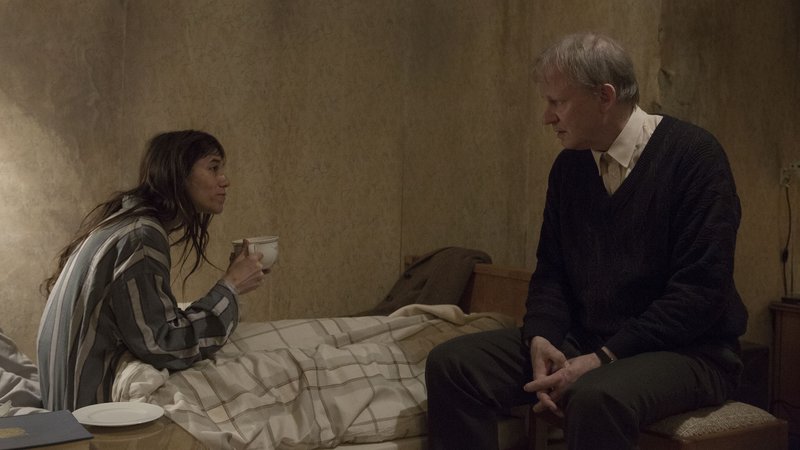 Nothing that a nice cup of tea and a chat can't solve, eh? Stellan Skarsgård and Charlotte Gainsbourg talk it out in Nymphomaniac.

In a strange echo, Lars von Trier turns his longtime muse Charlotte Gainsbourg into a similarly inhuman predator for his latest hate poem to humanity, Nymphomaniac. But even though she is a real human, there is a lot less to like in her.

Originally shown at Cannes in a butt-numbing five-and-a-half-hour cut, von Trier has shown some uncharacteristic compassion for the audience's tolerance by editing the whole mass down to under four hours and splitting it into two volumes.

Yet this may be a case in which too much is cut. I know, the idea of even five hours of von Trier may be too much for many. But there's a distinct feeling that, after cutting volume one into a smart, elegant, somewhat sleazy and yet often hilarious tale, volume two devolves into a rambling, shambling, and ultimately slightly silly collection of scenes.

Vol. I begins with the quietly avuncular Seligman (Stellan Skarsgård) finding Joe (Gainsbourg) beaten to a pulp in an alley, somewhere in England. After she refuses medical or police help, he escorts her to his home, where she recounts the lengthy tale of how she ended up there. Joe is, by her own accounting, a nymphomaniac. However, she seemingly derives little pleasure from the act of sex itself. Instead, she derives a morbid curiosity from the steps leading up to and away from the act, as she takes lover after lover (to an extent that she must finally start scheduling them).

Gainsbourg has little physical contact in this first half. Instead, it is her younger self (played by Stacy Martin) who takes pleasure in the discomfort and adoration of others, while the older Joe fails to shock the amiable Seligman.

But what made Vol. I most fun was the interplay and verbal jousting between Skarsgård and Gainsbourg. When she explains her techniques for seduction (and the audience expects extreme public nudity), Skarsgård compares it, at great and jubilant length, to fly fishing. That all decays in the second volume, and it feels rushed – like von Trier had a clear vision of how to reshape the first volume, and just crammed everything else into a mandatory two hour box. Moreover, the editing did not remove a completely unconvincing subplot about loan sharks, or an ending that isn't simply left-field, but feels like a cheap shot.

While von Trier is hit and miss as both moralist and storyteller, he regularly elicits great performances. Martin is hilarious and charming in the opening volley, which could explain much of its success. By contrast, Gainsbourg's often monotonous recitation, like a mirthless Fanny Hill, shows that her era of collaboration with the director should probably come to an end, having peaked early with Antichrist. Her co-star from that superior collaboration, Willem Dafoe turns up, but is mired in that dumb gangster plot, and Udo Kier is spotted for an inexplicable spit-and-a-cough cameo (maybe he's in that other hour and a half?).

But some actors respond to his hand. An unrecognizable Uma Thurman delivers her finest five minutes on film as a jilted wife (think Vanilla Sky's "Your body makes a promise" speech, ramped up to full Oresteia). Shia LaBeouf almost redeems three Transformers movies as Joe's first crush/conquest. But the true plaudits must go to Christian Slater as Joe's devoted and finally pain-wracked father. Much like his Eighties confederate Kiefer Sutherland delivered fragile hubris in Melancholia, Slater's performance is brittle and tender. 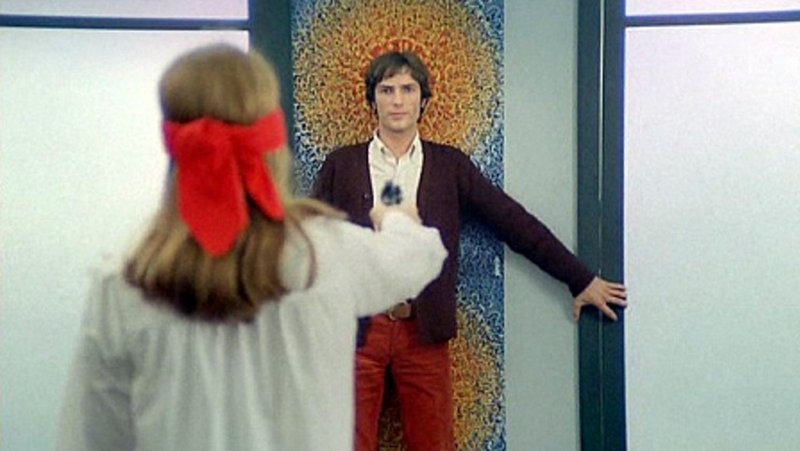 There's no such elegance or delicacy in Eden and After (Redemption). Alain Robbe-Grillet is probably best known to film enthusiasts as the co-writer of Last Year at Marienbad, but also filled his time with novels and films heavily influences by Descartes' concepts of mind and Heidegger's writing on phenomenology. So, pretty short on laughs, then.

In 1970, he directed L'èden et après, a full-blown assault on the mannered diffidence of the French New Wave. A group of louche and bored students wander around a restaurant. At least, we presume it's a restaurant, since there's a creepy waiter wandering around. It could be a gallery filled with Mondrian knock-offs. Anyway, the students spend their time play-acting at horrible crimes – murder, gang rape – with all the excitement of proto-hipsters huffing at their parents' record collection. Then a mysterious Dutchman (Pierre Zimmer) turns up, tells them their games suck, makes one girl eat a raw egg, and then convinces another (Catherine Jourdan, previously a bit-player in The Girl on a Motorcycle and Le Samurai) to take a "fear powder" he picked up in Tunisia.

Robbe-Grillet seemingly regarded narrative, and especially dialogue, as an impediment. Where most filmmakers use story to convey an emotion or message, he goes straight for the metaphor and the subtext. To get all semiotic, there's no vehicle, just sense and referent.

Eden and After is a film with a point, and when Robbe-Grillet felt it didn't smash the audience over the head with it enough, he deconstructs his own work. "These stories that you see on TV that are linked in such a way, so logical, continuous, reassuring, are made only to put you to sleep," he proclaims in previously unreleased TV project N. Took the Dice. An early experiment in remix culture, this is the director as philosopher and trenchant self-critic, dismantling what it is he does in his own work, commenting on the film and using extraneous outtakes to create a new anti-narrative.

Eden and After is profoundly French, and profoundly of its time. Bursts of female nudity are constant (all the men keep their clothes on pretty consistently, as was the order of the day), and there is the post-colonial fascination with North Africa, as the students and the mysterious stranger suddenly (and with no explanation) find themselves in Tunisia. Their bored, bohemian, Rive Gauche games becomes more real and surreal, as their pretenses of domination and violence become the real thing. Or do they? Eh. Probably not.

The hypnotic anti-storytelling influence of Robbe-Grillet can arguably be seen in Under the Skin's tone poem approach to filmmaking (also, to go back to Spielberg, one character ends up in a vertical cage that looks almost exactly like the sacrifice device from Indiana Jones and the Temple of Doom). However, it suffers the fate of so many experimental films. What was once a stunning display now seems old and moribund.

And yet, there's a certain complex and furious charm here. Watching Eden and N. (both included here) gives a fascinating insight into a filmmaker who seems frustrated by his peers, and quite happy to call them out.