Roberto Orci Grabs the Bull by the Horns for 'Matador'

Taking Robert Rodriguez from his comfort zone with soccer'n'spies 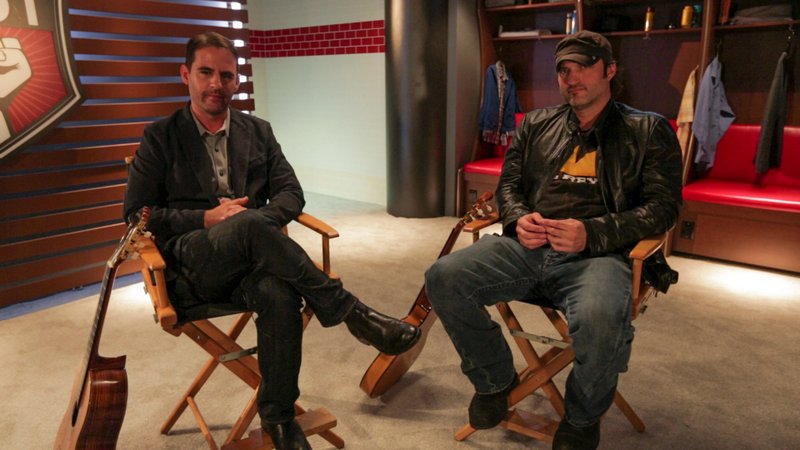 Could Roberto Orci have picked a worse day to visit Austin? All is calm in the lobby of the Four Seasons, but outside the streets of Austin are jammed, as President Obama tries to get to Robert Rodriguez's house for a fundraiser. Actually, that's why Orci's in town. "I'll be there later," he said.

It's not just a social visit for the creator of Fringe, and writer/producer of the Star Trek reboots. Orci's newest show, Matador, is set to debut tonight, July 15, on Rodriguez's newest venture, the El Rey Network. Billed as the Latino James Bond, it features Austin actor Gabriel Luna as Tony Bravo, an undercover DEA agent shanghai'd by the CIA into posing as a professional soccer player.

With the futbol-themed show debuting in the afterglow of the 2014 FIFA World Cup, Orci said, "We look really smart." However, he called the timing "slightly coincidental and slightly that it's an idea that we've had the idea for a long time and couldn't find a home for it."

How long? Five years, before even the last World Cup, and a conversation with his cousin and co-creator Andrew Orci. "We were talking about what's the kind of heroes we would like, and what's a James Bond that would speak to me?" That's when they first thought of Tony Bravo. The only problem was that there was no way he could get a soccer-themed show greenlit in 2009, not in the football-agnostic USA. "I'd probably have a better time selling it internationally."

The irony is that, while L.A. in 2009 was the wrong place to get the show made, L.A. in 2014 is the right place to shoot it, precisely because (like soccer) it can be so international. Orci said, "I learned while shooting Alias years ago, we were able to take Los Angeles and double it for the rest of the world. People would ask me, did you really shoot that in Hong Kong?' Well, no, Los Angeles can be a lot of places." That will play well in later seasons, as Bravo's team the L.A. Riot goes on the road, and even overseas. "A soccer team's going to take us everywhere."

Still, it takes a five-year wait, and the arrival of Rodriguez, to finally get Orci's vision on TV. In a way, it's odd that the two haven't worked together before. The Mexican-born Orci is a UT graduate, and was even taught by some of the same lecturers as the RTF department's most famous filmmaking alum.

In fact, it's kind of an Austin reunion of people who had never worked together before: Luna, the show's star, has been a fixture on local stages for years, even taking an Austin Critics Table award for best actor. But it wasn't some kind of Hill Country connection that got him the part. "Number one, he's a star," said Orci. The producers quickly realized he had the mix of charm, physicality, and acting chops needed. "In retrospect, maybe I should have been more scared, and so should Robert, and maybe he was but didn't tell me. But the minute we met Gabe and saw how soulful he was, we just thought, 'This is going to be fun.'"

Not that Orci had been waiting for Team Troublemaker to drop into his life. He'd pitched the show on and off, but "it never quite got traction," he said. Then he had a pitch meeting with Rodriguez and El Rey, and suddenly he was running for the goal. "They said, 'Have you got any ideas that would fit this network?' and I said, 'Well, I have this idea. Soccer player by day, spy by night.' They go, 'In. Thirteen episodes.' Literally that fast, but it was just the right time and the right place."

Rodriguez had one request for Orci: He wanted to direct the pilot. Orci's response was pretty simple. "'Let me think about that YES.' He's acting all humble, asking my permission almost, and I'm like, 'Are you out of your mind? Number one, you run the network. Number two, you're Robert Rodriguez. You're fantastic. I had to pretend to think about it." He laughs. "I'm trying to get him to direct the 13th episode." This was a major change for Rodriguez. Number one, bar Sin City and the original From Dusk Till Dawn, he's always had a hand in his scripts. Number two, pretty much all of his professional career has involved shooting in and around Austin. This was someone else's script, and he was shooting out in California. Orci said, "He's out of his comfort zone."

Orci sees the situation as a reversal for Rordiguez: As the main maverick behind East Austin's Troublemaker Studios, the director has created an environment where he can protect, develop, and nurture talent. Now this was other producers giving him an opportunity. "He's sort of considered a guerrilla filmmaker, and there's a lot of feature directors who have a hard time moving to TV. It's brutal, man. It's fast, but for him, it's nothing new, and we get feature quality."

At the same time, Rodriguez provided Orci and his writing team with a rare opportunity. When I spoke with Rodriguez before SXSW, he talked about how having a confirmed season run for his first narrative series for El Rey, From Dusk Till Dawn, changed how he could tell the story. No frontloading the pilot with all the action and all the teasers, but instead creating a script that could breathe across the whole run.

For Orci, who cut his teeth on Sam Raimi's triumvirate of hijinks action series (Xena: Warrior Princess, Hercules: The Legendary Journeys, and Jack of All Trades) before developing shows like Sleepy Hollow) it was a breath of fresh air. "It changed the whole game," he said. "Even though I have a lot of network experience, I've never written a pilot where I knew I'd have 13 episodes. … I hope audiences watching shows on El Rey will notice the difference, because that's a gift."

Case in point: Where most shows would drop Alfred Molina as the seemingly sinister team owner Andrés Galan at the end of the pilot as a big reveal, Orci gets to give him a much more subtle entrance. "You think he's the villain, but he's so much more than that," said Orci. "[Molina] has been very complimentary about the way he gets to grow his character at a reasonable pace. He knows that if he was in a teaser, twisting his mustache, that it would feel false. The idea that he gets to grow – and by the way, he helped us develop this character in a way that I can't wait for you to see – that we could never get away with if we hadn't had the ability to plan ahead."

Matador debuts on the El Rey Network, 9pm Eastern/Pacific, 8pm Central. Pick up the next issue of the Chronicle for an interview with Gabriel Luna, star of the show.