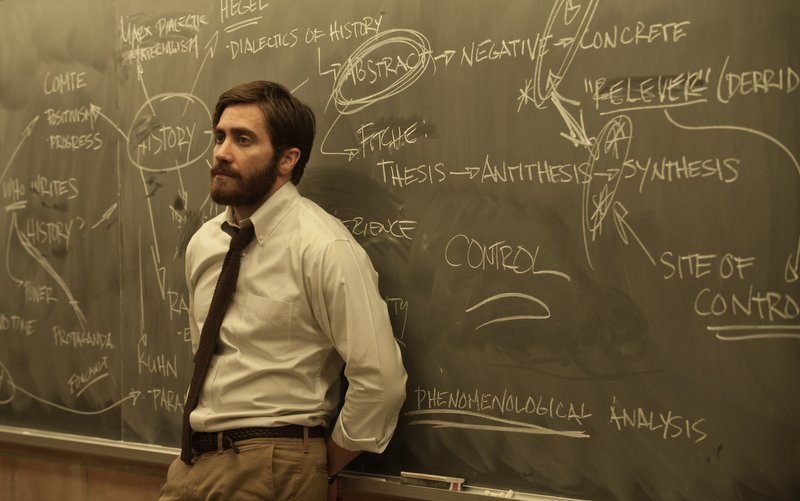 Jake Gyllenhaal has a lot more to ponder than just the theory of individuality and self-determination in Enemy, out this week (Image courtesy of LionsGate)

Remember when Jake Gyllenhaal became famous with Donnie Darko, and then he became replaced by a guy that looked like Jake Gyllenhaal, but did big studio bullhooey like Prince of Persia and The Day After Tomorrow? Well, both Gyllenhaals are in Canadian psychological creepfest Enemy (LionsGate). Kinda.

Adam Bell (who we shall call Gyll-One) is a professor at an unnamed Toronto university. Anthony Claire (Gyll-Two) is a bit-part actor (who, even more confusingly, is known to many characters by his stage name, Daniel St. Claire, who would otherwise be known as Gyll-Three.) Gyll-one becomes aware of Gyll-two's existence, and becomes obsessed with finding out more, and ultimately meeting, his doppelganger. Which, of course, never ends well.

Mirror images are a mainstay of psychological cinema: However, Enemy comes from a literary source, José Saramago's 2002 novel The Double. Scripter Javier Gullón (best known in these parts for his script editing work on 2010's Agnosia) is relatively faithful to the original work in detail and broad strokes, but then takes radical changes of direction in the mid-range, such as when Gyll-One and Gyll-Two have their inevitable first meeting. Instead of building an early rivalry about who is real and who the duplicate, as Gullón did, he builds a sense of existential dread, as Adam fears to even admit that there is another him out there.

So far, so oddly conventional/conventionally odd. But then there's the giant spiders.

This is Gyllenhaal's second film with director Denis Villeneuve, the first being the well-regarded and much bigger budget revenge drama Prisoners. The spiders are an addition to Saramago's tale, but keep crawling into the narrative. One is crushed under foot at a sex show, another (malformed in a clear homage to Louise Bourgeois' Maman) gracefully stalking the skyline like benevolent deity, another merely hanging out in a bedroom. They are the key symbol, and Villeneuve does nothing to explain their meaning.

That will inevitably be frustrating for a lot of viewers. In a film that, while stylized, is mostly naturalistic, they seem to be the most overt indication that something has gone hideously awry in the world, but no one even mentions them.

And that's why they're important. Villeneuve has made a film whose experience is supposed to be be wholly and solely subjective. The audience is forced to view everything through the wholly unreliable eyes of Adam/Anthony. The people surrounding Gyll-One and Gyll-Two rarely, if ever, interact, and even then there is a Gyllenhaal as an intermediary. The two leading females (Mélanie Laurent as Adam's girlfriend Mary, and Sarah Gadon as Anthony's pregnant wife Helen) become slowly aware that something is awry, but then, what is their influence to one another? Both glacially blonde (we're talking Daenerys Targaryen near-transparent here), not twins but almost like siblings, and that again raises complex questions about the inter-relations of the two Gyllenhaals.

Villeneuve scatters little hints and clues, implying some greater meaning (why exactly are the three Gylls initials AB, AC, and DC? Is Adam truly first, as his name suggests? And lesson is he actually teaching in his course?) But then it seems that meaning is his secondary concern. Gyll-One and Gyll-Two enter full-blown meltdown as each vies to take away or take over the other's life. But then, are they really separate to begin with? Isabella Rossellini's brief appearance as Adam's mother may tip the film's hand a little too clearly as to whether it's psychological or merely surrealist.

It is, however, profoundly Canadian. Our neighbors to the North may have their well-earned reputation for affability (even their crack-smoking mayors come off as quite convivial) but their horror is deeply and disturbingly cerebral. Villeneuve eschews the bursts of gore and putrescence that were the hallmarks of early Cronenberg (or, more recently, his son) or Quebecois controversialist Remy Couture. Instead, he focuses on a sense of oppression and dread, dumping his characters into a maze of brutalist concrete architecture, under a sickly yellowing sky of smog and gloom.

And trapped in its confines are the two iterations of Gyllenhaal. It's hard not to see the actor reflected in the characters: Adam, cerebral but unfulfilled, and Anthony, whose IMBD fame has brought him a small seat at the table. He provides both with a certain sense of desperation, never falling back on anything so obvious as a "good clone/bad clone" dynamic. Instead, he navigates the same sense of despairing self-realization that frustrated some but fascinated others in spare parts tragedy Under The Skin. He is staring down the barrel of his own mortality, and it's his own eyes staring back through the sights.

Enemy (Lions Gate) is out on DVD and Blu-ray now.